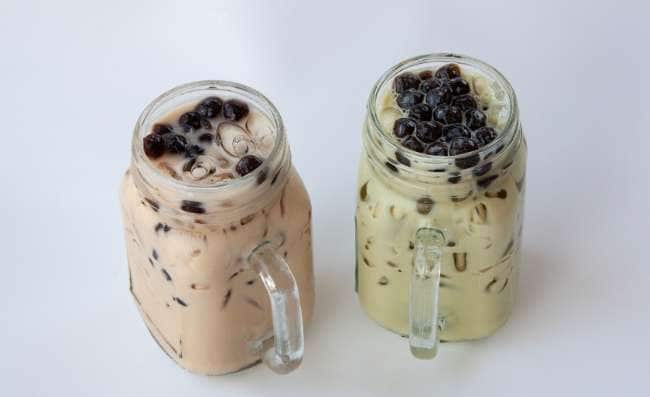 So what’s the difference between bubble tea and boba? Due to its rapid rise in popularity, bubble tea has been given many different names across the globe, from the United States to Southeast Asia and even Europe. It is difficult to keep up with everyone’s own vocabulary.

A few examples of these names are Boba Tea, Bubble Tea, Milk Tea, Pearl Tea, Tapioca Tea, and Pearl Milk Tea. The pearls known as Boba are what give bubble tea its distinctive flavor.

It is said that the round shape of tapioca pearls was the idea for the name of this famous drink. Even though “bubble tea” and “Boba” both refer to the same thing, “Boba” seems to be more frequent. Boba tea is a famous tea-based drink in Taiwan, where it was first developed.

Boba is actually a Taiwanese slang. The drink in the United Kingdom and Canada is known as bubble tea.

In the West coast, such as Los Angeles it is commonly referred to as “Boba” while in the East coast; New York, and North America it is known as “Bubble tea.”

How to make Milk Foam for Bubble Tea?

Is Boba Tea the Same as Bubble Tea, or Are There Variations?

Bubble tea is a drink, while Boba is tapioca starch pearls that are often spherical and used to make boba drink.

What Is the Meaning of Boba?

Tapioca starch, often called cassava starch, is the main ingredient in Boba or “tapioca pearls.” It is a little ball that gets its sweet rich flavor and eerie black color from being boiled in brown sugar syrup.

As a result of its practically tasteless nature, Boba can be combined with a wide range of drinks. Typically these spheres are black in color and have a particularly chewy texture.

Although Boba has a gelatinous texture, no gelatin is used in its production. Therefore, these mini chewy balls are safe for vegans and those avoiding gluten.

Boba’s natural state is one of a clear, snowy white color. The rich brown to black hue of boba pearls is achieved by adding brown sugar or black food coloring during the production process.

Brown sugar is not just a tasty sweetener; it also helps milk Tea stand out visually by providing a striking color difference. Boba is most commonly used to make bubble tea. The term “boba” can refer to the beverage itself or tapioca pearls.

How can one make Boba?

Boba pearls can be purchased online, or in most boba shops. But if you want something fresh, you can always whip up a batch in your kitchen. Boba can be made with a few ingredients at homes such as sweet potato or cassava.

Cassava root (from which tapioca starch is extracted) is used to manufacture chewy tapioca balls, which make the perfect drink.

They also come in different flavors. To make a dough-like substance out of the starch, simply add boiling water and knead until it comes together.

To complete the recipe, the dough should be cut and formed into bubble shapes before being put into a boiling mixture of brown sugar and water.

Bubble tea drinks are normally milky with a tea ground. White Tea, Green Tea, Black Tea, and oolong tea are the most popular varieties used to make this drink.

The first thing you will need to prepare milk tea at home is some brewed tea. A quick foundation can be made by steeping tea leaves in boiling water to make black Tea, Green Tea, or oolong tea.

Fresh Milk or cream is required to make the trademark creamy texture of boba tea. You can use any kind of milk you like, including whole, half-and-half, or even powdered creamer, to prepare this.

You can use oat milk, almond milk, coconut milk, or soy milk as a replacement if you cannot have dairy because of lactose intolerance.

For a sweeter taste in beverages like brown sugar milk tea, condensed milk is often used as a substitute for traditional cream. By blending full-fat milk, a foamy topping can be made.

Aspartame and stevia, two sugar-free alternatives that have less sugar, are also utilized. Honey can be used as a sugar replacement in bubble tea for those who prefer a sugar-free option.

It is up to you whether or not you want to put ice in your bubble tea. The use of ice makes things feel more refreshing as you drink bubble tea.

Sinkers and Toppings – Customers can choose their own sinkers and toppings to go along with their boba pearls. Some of the most sought-after condiments are;

Custard Pudding; Boba pudding tastes similar to custard but is firmer thanks to the addition of gelatin. It is made using egg yolks, milk, and sugar. Therefore, they are perfectly crunchy.

The more luscious and creamy the milk tea, the better they pair with them. Taro and mango puddings are two other pudding options. for those who like taro milk tea.

Grass Jelly is a jelly with a minty flavor that is made from Mesona that is of Chinese origin. As a result of the brown sugar, the glass jelly takes on a herbal sweetness. Grass jelly, in contrast to pudding, can be sliced into squares.

Aloe vera jelly is fantastic as a healthier substitute for more conventional toppings. Aloe vera jelly’s mild, refreshing taste complements the fruity notes of many teas. In addition, it has a lot of antioxidants.

Taro balls– These taro balls could easily be confused for boba balls based on their appearance; nevertheless, the texture of these taro balls is far more pleasant, and eating them is a lot more fun. They typically also include tapioca flour in addition to the taro starch that is used in their production.

The taro root bubble tea, when combined with this topping, produces the most satisfying flavor. A seaweed extract ball that has been stuffed with sugar and fruit juice is called Popping Boba. They can be found in bubble tea shops.

How to make Bubble Tea?

The tapioca balls that make bubble tea can be frozen, but the finished beverage cannot.

Within 6 hours of simmering, the black boba pearls lose much flavor and texture. Their softness and chewiness will diminish if kept in the fridge for more than three days or frozen for more than a month.

However, uncooked black tapioca pearls will keep fresh for up to 2 months if stored in a sealed container in a cold, dry place.

What are other names for Boba Tea?

Is boba tea and Bubble Tea the same? Bob

Yes. There is no difference between the two titles; both refer to milk tea topped with boba pearls.

When comparing fruit tea with milk tea, what distinguishes the two?

Fruit teas come in many forms, some of which even involve milk. On the other hand, fruit teas typically incorporate either an actual fruit infusion or a fruit syrup addition.

This Challah Rolls recipe is an excellent bread recipe for your family.  Challah pronounced as ‘halla’ and meaning any bread, is an outstanding piece of culinary art that any passionate bread maker is attracted to! You will likely find Challah bread rolls on the table during major Jewish celebrations. During Rosh hashanah, which marks the…

Nothing makes me happier than tangy caramelized apples wrapped in a fluffy pastry and topped with cheese icing. If you are a great fan of apple pies or cinnamon rolls, you will absolutely fall in love with these amazing apple pie cinnamon rolls. It’s having twice the amazing taste all in one. I can’t explain…

So, Funny story! I discovered this Creamy Spinach & Sausage Pasta dish one of those nights before the grocery trip when you scavenge the freezer and the pantry for something to cook. I discovered I had some “weird stuff left” from my previous grocery and decided to google if I can make something up from…

A recipe with a short list of ingredients requiring only 5-10 minutes of preparation! About the recipe I’d like to show you how to make super simple delicious fresh prickle cucumbers. The recipe needs just a few ingredients that you can easily find in your kitchen. This recipe doesn’t last long in my house. The…