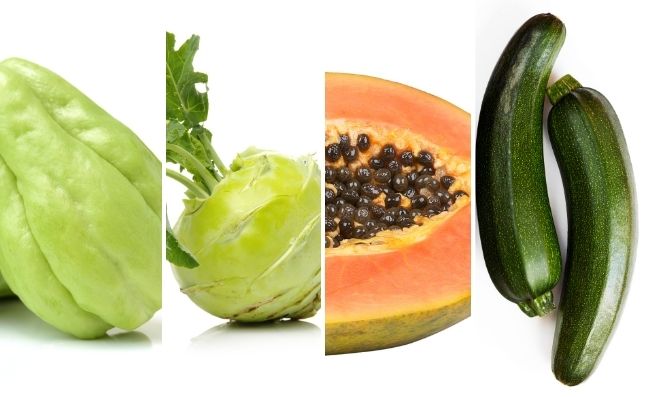 The first time I saw chayote I thought it was a wrinkled up pear. Don’t blame me, it generally has an unusual appearance.

I would describe the flavor of chayote as mildly sweet. It always tastes fresh with a crisp crunch similar to that of a cucumber.

The key to enjoying this fruit is picking the best ones while you are at the grocery store. I suggest picking chayotes that are small and firm.

By firm, I don’t mean you should choose the ones that are rock hard.

You should also be on the lookout for blemishes and choose the ones that are unblemished.

Chayote is quite popular in the United States since it is grown in several states including Florida and California.

Therefore, chances are that the grocery store closest to you stocks chayote. In case you run out or can’t find any in the store, you can always use substitutes.

Zucchini, cucuzza, green papaya, kohlrabi, yellow crookneck squash, fuzzy melon, and patty pan squash are some of the most suitable substitutes for chayote.

Zucchini is arguably the best chayote substitute. It has a mildly sweet and bitter flavor.  You can eat zucchini raw or cooked, but I recommend cooking for a richer flavor.

My favorite thing about zucchini is the mild flavor that takes up the flavor of the dishes it is added to. You never have to worry about it altering the flavor of your dish.

The most notable difference between chayote and zucchini is the texture as well as water content. While using zucchini as a substitute, you have to cook it for a few minutes longer to get the same results.

Cucuzza/ bottle guard is another amazing chayote substitute. It is a variety of squash that can easily replace chayote.

The flavor of cacuzza is slightly different since it is mildly nutty. It also has a rich squash flavor. All in all, it works well in most recipes that call for chayote.

You can eat cacuzza raw or cooked but I recommend cooking it for the best results.

Green papaya can replace chayote in most recipes. It is basically papaya that is not yet ripe. Green papaya is commonly used as a vegetable. It has crisp flesh and a very mild flavor.

You can use green papaya in any recipe that requires you to use chayote.

The only downside is that it is not readily available. Most local stores do not stick green papaya, but you can always buy it online.

Kohlrabi is a juicy vegetable that has a mild, sweet flavor.

It also has a crispy texture. Kohlrabi is an amazing substitute since its flavor is similar to that of chayote.

I highly recommend using kohlrabi in salads. You can also cook them the same way you cook chayote.

Yellow crookneck squash is a suitable chayote substitute. It has a firm, white flesh similar to that of chayote.

The flavor of yellow crookneck squash is slightly different from that of chayote since it is buttery, but you’ll be glad to know once you add it to your dish and mix it with other ingredients the buttery flavor is hardly noticeable.

You can use fuzzy lemon in recipes that call for chayote. Fuzzy melon is a vegetable whose appearance is very similar to that of zucchini.

It has a mild flavor and is, therefore, a great addition to soups, stews, and stir-fries. You can also steam fuzzy melon or stuff it.

Use fuzzy melon in recipes that require cooking for the best results.

If you do not have any of the substitutes we have discussed above but have some patty pan squash in the house, you can use it instead. Patty pan squash comes in three colors; green, white, and yellow.

The young and tender patty pan squashes are ideal for use in salads and cooked dishes including desserts.

Just remember to slice them thinly before adding them to your desserts. You can grill them, fry them, or even oven-roast them.

In case you only have the older mature squashes, I suggest using them for stuffing.

You can eat chayote raw the same way you eat cucumber or celery. The mild slightly-sweet flavor is quite appealing.

If you have young tender chayote, you can eat the skin. However, if it is a bit older with tough skin, you will have to peel it before eating or even cooking.

Be careful when peeling chayote because it tends to remove a sticky liquid that may irritate your skin. I highly recommend wearing gloves when peeling. Alternatively, just peel the chayote under running water.

If you want your salad to have an extra crunch to it, add chayote.

Chayote is an excellent addition to salads and it pairs perfectly with most salad ingredients thanks to its mild flavor.

You can add chayote to stews and soups.

It goes well with most spices and will enhance the flavor of your stew or soup. I suggest frying, roasting, or braising the chayote before adding it to stews and soups.

You can steam or boil chayote the same way you do a classic squash. This is one of the simplest ways to enjoy it.

My favorite thing about chayote is that it blends perfectly with all spices. You can sauté chayote in butter and add any of your favorite spices.

If you are looking to add a twist to your casseroles, I suggest adding chayote. The casseroles will taste amazing.

If you are a pie lover like I am, bake chayote into a pie. I assure you that you will not be disappointed.

How to Store Chayote

The best way to store chayote is by wrapping the chayote in a paper towel, placing it in a plastic bag then storing the bag inside your refrigerator.

It will stay fresh for up to four weeks.

As we have discussed above, chayote is an amazing ingredient that has several uses. Its mild flavor and crispy texture complement most dishes.

In case you do not have any in stock, you can use any of the substitutes that we have discussed above.

The substitutes may not give you the exact flavor and texture that chayote gives you, but they will give you similar results in recipes that call for chayote.

My go-t0 substitute has always been zucchini because it has a mild flavor and it is also readily available. It works well in most recipes that require you to use chayote.

My close family and friends love my cooking. To ensure to give the best, I go out of my way to use some of the most versatile available ingredients. For most cooking, I use shallots because they bring out that mildness in them, which gives dishes a sweet taste. Moreover, even without garlic, the presence…

If you want your hamburger to be irresistibly delicious, you need to use a hamburger helper. The hamburger helper enhances the taste and appearance of your hamburger. Milk is one of the key ingredients you will need to make an extraordinary helper, but if you run out of milk, you can always use a substitute…