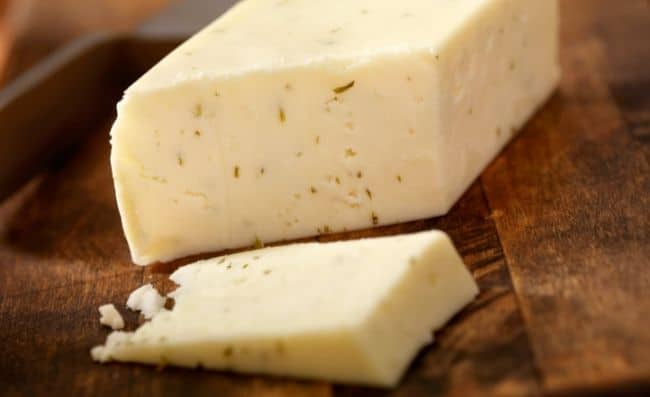 A while back, I was looking for ‘a perfect’ cheese that I could use in my recipes and eat it raw, maybe with some fruits. I came across a few options, but it ended my search when I discovered Havarti cheese.

This is a cheese that you either grill, slice, or melt. It is perfect in various recipes due to its nutty flavor and sweetness.

But what if you can’t seem to find Havarti cheese in stores, and you are impatient to try out a recipe that requires you to use the cheese? Or do you don’t like Havarti cheese? What do you do then?

As usual, I know that not everyone will love Havarti as much as I did, or sometimes you might not have the cheese. So, I did some research to come up with the best cheese alternatives for the cheese.

How you should eat Havarti cheese

As stated earlier, Havarti is a cheese that can be grilled, melted, or sliced. It is semi-solid and can quickly melt at room temperature. Havarti also has a sweetness that makes it different from other cheese with a softness and a unique taste.

So, how should you eat the cheese? You can use it while preparing your food, or you can eat it raw either with some fruits or on its own.

Most people use Havarti in grilled chicken recipes. You can, however, use it when cooking vegetables, pasta, and you can also grate it on pizza. It would be best if you were careful to note how this cheese is applied in every recipe to avoid bad results.

Now that you know the uses of Havarti and how you should replace it, let us look at each of the alternatives you can use in its place.

Saint Paulin is a french cheese with a texture close to Havarti cheese. Like Havarti, Saint Paulin is semi-solid, and it melts quickly. It is easy to grate and slice it. In short, it has all the characteristics of Havarti.

The main difference between Havarti cheese and Saint Paulin cheese is taste. Saint paulin has a more established taste than Havarti because it takes more time to age.

Havarti is well known for its sharp but sweet taste. Saint Paulin cheese lacks sharpness and is less sweet than Havarti. It is creamy upon melting, which is a similarity it has with Havarti.

If you are looking for a cheese alternative for Havarti that is not that sweet, saint paulin is perfect. It is soft and creamy, and it will serve you. The general taste of the dish you are making with it will change.

Gouda is a cheese that originates from the Dutch. It varies from semi-solid to hard cheese and is an excellent substitute for Havarti in both cooked and raw forms. This cheese is sweeter than Havarti, and if you are a sweet tooth like me, it is a perfect choice.

This cheese is one of the best Havarti alternatives. It is sweet, soft, and creamy. It also melts quickly, and you slice it easily. It has a rich flavor and, unlike Havarti, does not have a bit of bitterness in it.

Gouda cheese is also easy to find as it is available in most grocery stores. It is also cheap, and if you are looking for a quick alternative to Havarti cheese, you can use it since it is readily available.

If you are preparing a dish that requires you to use Havarti cheese, and maybe you prefer sweeter cheese, use gouda instead. You will not be disappointed.

If you are a Havarti cheese fanatic or love cheese, you probably have heard or come across Tilsit cheese. It is the perfect substitute for Havarti in any recipe.

It is semi-solid, creamy, and is slightly bitter like Havarti. It also looks like Havarti, and you can easily confuse them.

It is also easy to find in most stores. You can use it for cooking, eating it raw, or using it in drinks. In short, you can use Tilsit in all places that require you to use Havarti. The difference in flavor is slight, and some people cannot tell it.

Monterey jack is what I like to call a quick fix. It is widely available, and you can quickly get it in any grocery store. It is different from Havarti in texture.

Personally, Monterey jack is not my favorite cheese. I wouldn’t say I like its texture, and I only use it when I run out of options.

It is, however, an excellent replacement for Havarti since it has its taste. Slightly bitter with a sweetness. If you are using the cheese when melted, you might not distinguish between it and Havarti. They taste almost the same, hence a good substitute.

Young cheddar is available in most parts. It is a perfect alternative to Havarti since it has a similar taste and texture. I prefer young cheddar to Monterey jack because it has a smooth consistency.

This cheese is the closest substitute you will get to Havarti cheese. It is semi-solid and has a slightly bitter but sweet taste, just like Havarti.

However you cook or eat it, you might not notice a big difference between Havarti and young cheddar cheese. Unlike Havarti, which can be harder to find, it is easy to find in some grocery stores.

Emmental cheese differs from Havarti in color. It is yellow. In other aspects, that is texture and taste; it is almost the same as Havarti cheese.

It is not as soft as Havarti; thus, it’s not as creamy. If you are preparing a dish that does not require much creaminess, Emmental cheese is a great alternative.

This cheese has holes that make it look even more different than Havarti. It has some fruitiness in its taste, making it almost as sweet as Harvati.

If you cannot afford Havarti cheese, swiss cheese is a suitable replacement. It is cheap, and it is available in most stores.

It has a flavor and creaminess that goes with most recipes that require you to use Havarti.

This semi-hard cheese is from Switzerland. It has holes in it, which is the distinguishing factor between it and Havarti, just like Emmental cheese.

There is no significant difference in swiss cheese and Havarti cheese taste and texture. So, it’s an excellent replacement when you are running low on funds, and you need to use cheese.

Top 7 Cottage Cheese Alternatives You will Love. Click to Read.

How to substitute Havarti cheese

Every recipe that requires you to use Havarti cheese will have different instructions. Most recipes will need you to choose a substitute that melts well with no difficulties. Others will require you to select an alternative with the same flavor as Havarti cheese.

These two are the main characteristics you should consider when looking to replace Havarti cheese in a recipe that requires it. So, the cheese you choose as an alternative must be semi-solid.

Keep in mind that even if the cheese you select as an alternative can be of a similar flavor, it might slightly change the resulting taste of your dish.

Choose an easy alternative to grate and slice if your recipe requires the cheese to be grated or sliced.

You can use Havarti cheese for pairing drinks such as some wines and light beers. If you are looking for an alternative pairing cheese, some of the substitutes that I will discuss below are good for pairing.

Havarti cheese is excellent because you can use it in all forms. You can slice it, grate it, grill it, or even melt it. Numerous recipes call for the use of Havarti cheese. When cooking mac and cheese, pizza, pasta, or even soup, you might need to use it.

If you need Havarti cheese and don’t have it, the replacements I have recommended above will help you immensely. Some will alter the taste of your dish, while some will have a flavor that is a close match to Havarti cheese.

Before using any of the above Havarti substitutes, you should know your end goal. If you are looking for the exact flavor, you should go with Swiss and Emmental cheese.

Now that you know what the alternatives of Havarti cheese are go forth and try them to see what you will like.

My husband bought me the most unexpected gift for our anniversary! He came home early from work with a bouquet of flowers and a nice box wrapped in the most lovely gift wrapper I had seen in a while. Of course, I was excited and could not wait to open my gift. The week before…

Salmon is an oily and fatty fish that flourishes nicely in salty water. People from Northern Europe value salmon and have eaten this delicacy for many years. As compared to most of the fish available in the market, salmon has some uniqueness because of its richness hence can cook it using a myriad of methods….

If you are a fan of squashes, you are most definitely familiar with zucchini. Zucchini is a popular squash commonly grown in Central America and Mexico. Like most vegetables, zucchini is very easy to grow. Zucchini has a very refreshing flavor. Unlike leafy vegetables, you cannot get tired of zucchini. A zucchini salad will always…

Tasso is a unique meat variety that is added to various dishes. It is unlikely for people to eat it on its own like they do other meat varieties. The ham has a spicy and smoky flavor. Most people use it to add flavor to dishes or season for soups. Tasso ham is famous in…

From soups to vegetables, cheese is an ingredient you probably use in your recipes. Romano cheese is quite famous, and I bet you have already used it or come across a recipe that requires you to use it. It originated from Rome hence the name. It has a salty yet sharp taste and has a…