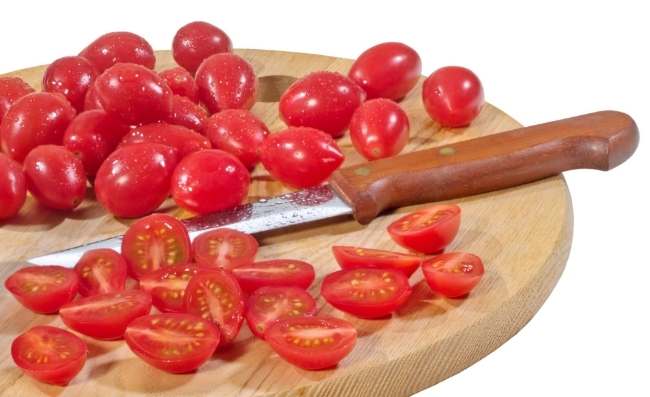 I occasionally make Italian cuisine so it is safe to say that I interact with plum tomatoes a lot. Plum tomatoes are the go-to tomatoes in Italian recipes. They are used in sauces, tomato pastes, gravies, and also in salads. I personally don’t use plum tomatoes in salads because I find them dry compared to the other varieties.

Plum tomatoes can either be used fresh or in their pureed form. Either way, they are a great addition to many dishes.

Plum tomatoes have a distinct shape and appearance in general.  They are usually oval in shape. On the inside, plum tomatoes only have two locules i.e. the seed compartments of a tomato.

Although plum tomatoes have distinct characteristics, you can substitute them with other ingredients in your recipes.

What is the Best Tomato Paste Substitute? Click to learn

You can use Italian style plum tomatoes in soups, gravies, jams, pickles, and sauces. They also blend well with meaty dishes.

The origin of small plum tomatoes can be traced back to South East Asia. You can easily tell them apart from the rest because of their size, shape, and bright red color.

Roma VF plum tomatoes are a special variety. They are mostly commercially produced. These tomatoes are grown through an openly pollinated variety of plants instead of a hybrid.

If you are wondering what type of commercially produced plum tomatoes you have just bought, chances are that they are Roma VF plum tomatoes.

The name originates from Italy where the tomatoes were first grown. Unlike other tomatoes, San Marzano plum tomatoes only grow in a warm climate.

Also, Find out: How Long Do Tomatoes Last?

You can easily substitute canned plum tomatoes with other varieties of fresh tomatoes. Some of the varieties that you can use include; Amish paste tomatoes, Druzba, Marianna’s peace, Cherry tomatoes, and celebrity among others.

If your recipe calls for 1 1/2 cups canned plum tomatoes, use 1 lb. of fresh tomatoes.

Alternatively, you can mix the fresh tomatoes with a little bit of tomato paste. The tomato paste will thicken the mixture and also enhance the flavor of your dish.

Sun dried tomatoes can also be used as substitutes for plum tomatoes. However, you should keep in mind that these tomatoes have a chewy texture.

Sun dried tomatoes are also sweeter compared to plum tomatoes. If you don’t want your dish to be too sweet, you can reduce the amount you use in your recipe.

Therefore, you may have to use less than what your recipe requires. Do not use canned cherry tomatoes in dishes that have a long cooking time. The reason is that the cherry tomatoes tend to lose their round shape when cooked for a long time.

Tomato puree can also be used in recipes that call for plum tomatoes.  Its consistency is ideal for soups and sauces. Tomato puree will enhance the flavor of the dish.

What is a suitable Tomato Puree Substitute?. Click to Read

Where can you buy plum tomatoes?

My favorite thing about plum tomatoes is that they are readily available. You can buy them in fancy supermarkets, grocery stores, or even farmers’ markets.  Most of the varieties are sold in the places we have mentioned above.

The rest can be found in supermarkets and farmers’ markets close to your neighborhood.

How to store plum tomatoes

In order for plum tomatoes to last for a long time, you need to store them properly. Tomatoes tend to rot when stored at room temperature. Therefore, I suggest two effective methods of storage i.e. freezing and canning.

Freezing is my go-to storage method because it is quite simple compared to canning. I also don’t spend too much energy and time on my plum tomatoes when I want to freeze them.

You don’t need to peel off the skin and you also don’t need to wait for long before freezing them. Here is how to properly freeze plum tomatoes.

First, you need to choose the best plum tomatoes. Make sure that they are ripe, firm, and without blemishes or cracks. Remove the top and core of the tomatoes and then chop them.

Place the chopped tomatoes in simmering water and let them simmer until they are soft. They will become soft in approximately 15 minutes. Once they are soft, drain them completely then place them in your food processor. Process until they form a tomato puree.

Click to learn How to Preserve Fresh Tomatoes without Freezing.

Canning has always been an efficient storage method when you want to extend the shelf life of tomatoes. This method needs a few skills and lots of patience coz you’ll spend a lot of time in the process.

Here is how to properly can plum tomatoes. F or every 1 quart of the canning jar, I use 3lbs. of tomatoes.

Agave nectar is a natural sweetener that you can use for topping, baking, or adding sweetness to drinks. If you are a vast baker, you might have encountered agave nectar. It is sweeter than sugar and tastes like honey though the viscosity varies.  I prefer using agave nectar in baking since I wouldn’t say I…

Kasseri cheese has its origin in Greece. It is made from a combination of goat’s and sheep’s milk. Ideally, the manufacturer uses 80% sheep’s milk and 20% goat’s milk. The best kasseri cheese in the market is made using unpasteurized milk. Kasseri belongs to the pasta filata family of cheeses. Traditionally, producers made it by…

When I think of my favorite dip, hummus is what comes to mind. Of course, I love guacamole and ranch, but they don’t give me as many options as hummus does. Grocery stores now have a variety of flavors when it comes to hummus. We now have more options than we did back in the…

Spelt flour is flour that people derive from a specific subspecies of wheat. It contains brown freckles with some white in it.  Cooks use spelt flour to bake all types of delicacies. You can make cookies, cakes, pancakes, brownies, and any other treats you want with spelt flour.  Although this flour is healthy with more…