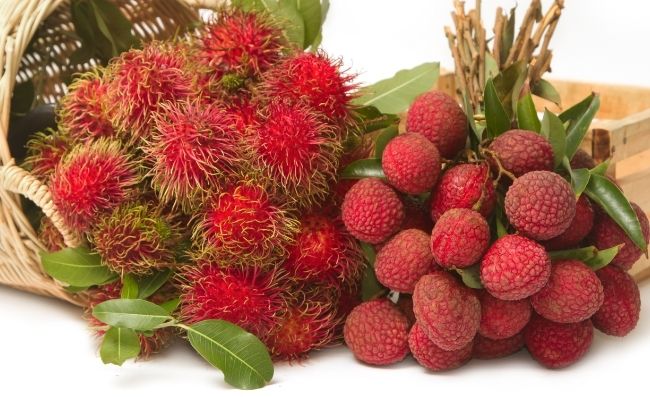 A lot of people tend to confuse rambutan with lychee and vice versa. I personally had a problem differentiating the two some time back as well.

Both rambutan and lychee are tropical fruits. They have a few similarities, but they also have very many differences.

Seeing that lychees and rambutans are different. It is rather difficult to say which one is better than the other. Honestly speaking, I can’t pick a favorite between the two. I love them both.

Lychee is more popular compared to rambutan. They are exotic fruits that people associate with summer in Asia. Lychees were originally grown in China but currently, they are grown all over the world.

If you are the kind of person that confuses lychees with rambutans and vice versa, this article is for you.

We will look at the similarities and differences between the two and even give you suggestions on how to enjoy these exotic fruits.

Origin and how they are grown

Like I mentioned at the beginning, both rambutan and lychee are tropical fruits.  Rambutan is believed to have originated from Southeast Asia while the origin of lychee can be traced back to China, specifically the provinces of Fujian and Guangdong.

Both fruits belong to the soapberries family, also known as Sapindaceae. This is exactly why you will come across several articles referring to lychee and rambutan as cousins.

Lychees and rambutans are cultivated in pretty much the same way. Both of them only flourish in tropical climates. However, rambutans grow best on hilly terrain. They also require good drainage. On the other hand, lychees require humidity, summer heat, rainfall, and soil that is slightly acidic.

Rambutan is relatively hard to grow so it’s only grown in Southeast Asia where it originated and in Central America. Lychees are easier to grow thus people from subtropical regions including parts of Europe and Northern America grow them.

These two fruits have a very similar physical appearance. The only notable difference is the size. Lychees are way smaller compared to rambutans which are just about the size of a golf ball. To be honest, if they were the same size I have no idea how I would be able to tell them apart at first glance.

Both fruits have red outer skin. However, the outer skin of lychee is much thinner compared to that of rambutan.

The skin of the rambutan has hair-like prongs that are either orange or neon green in color. They are very noticeable so you can spot them right away.

When you remove the skin, rambutans and lychees look very similar. Both of them have white flesh. Both of them also have a big seed when you cut through the flesh in the middle.

It is notable that both fruits start off as green and turn red when they ripen.

Rambutan and lychee may have the same physical appearance, but they do not have the same flavor. Lychee is less sweet compared to rambutan.

Additionally, it is not creamy. It has a floral taste and is crispy when you bite into it. On the other hand, rambutan is sweet with a rich creamy flavor.

Also, Click to read about; Mangosteen vs Lychee Fruit.

How to enjoy rambutan and lychee

Rambutan and lychee can be enjoyed the same way. Here are a few ways you can enjoy them.

Like most tropical fruits, the best way to enjoy them is on their own. If you want to eat lychee or rambutan, simply use a serrated knife to get rid of the outer skin and enjoy the white flesh.

If they are very ripe, just tear off one end of the skin and push the flesh out. Always remember that the seeds are not edible.

What better way to enjoy fruits than in a fruit salad? Both of them are a great addition to fruit salads and they taste amazing.

I really love lychee and rambutan smoothies. You can make a smoothie with lychee or rambutan alone, or you could add other fruits like mangoes, bananas, pears, or any other fruit that you have on hand.

My favorite thing about lychee and rambutan is that they blend in perfectly with other fruit flavors.

Lychees can be used in cooking. Use them as an ingredient when making muffins, puddings, and sorbents for an exotic flavor.

You’d be surprised at how better your dessert tastes when you sprinkle some lychee on it.

You can add both rambutan and lychee to your cocktails. For some weird reason, they taste the same when added to cocktails.

Both lychee and rambutan are rich in essential nutrients. Truth is, they both have similar nutritional content. They contain vitamins, minerals, and anti-oxidants.

They also have some sugar content, calories, and fiber.

Compared to other sweets, rambutan has very low sugar content. Research has shown that people who eat rambutan have a lower risk of contracting diabetes.

The fiber in rambutan will leave you feeling full for several hours. Therefore you won’t have the urge to eat often and will consequently lose weight.

Traditionally, lychee was popular for its medicinal value. Here are a few benefits of eating lychee

Lychee is rich in Vitamin C which is essential in helping the body fight off infections.

Rambutan and lychee are amazing tropical fruits. If you have never tried any of them, this is your cue to do so.

People have different preferences when it comes to flavor profiles, but I can bet you’ll have no problem with them. They are tasty and healthy. What’s not to love?

Also, Read on Semolina vs Polenta.

There’s nothing better than scrambled eggs served alongside bacon and toast in the morning. In most American households, scrambled eggs are the go-to breakfast option. They are easy to make, and you can whip them up in just a few minutes. You may be disappointed when you make scrambled eggs only for them to turn…

Shiitake mushrooms have quickly gained popularity in the United States. Their origin can be traced back to Asia, where natives used them for medicinal purposes. Shiitake mushrooms are a popular ingredient in Asian cuisine. They can either be dark grey or brown. You can also buy them dried or fresh depending on your preference. These…

Grape seed is quite famous for its nutritional and health benefits. It contains a generous amount of polyunsaturated fat (healthy fat) and vitamin E. Manufacturers extract grape seed oil from grape seeds that remained after making wine. Considering the manufacturing process, everyone considers grape seed oil an eco-friendly product. Generally, grape seed oil has a…