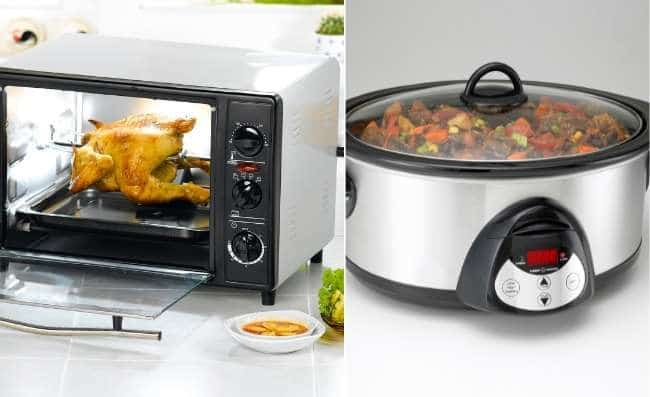 We are in an era where cooking has become easier because of all the cooking gadgets on the market today. At times, you become confused about which appliance is best to invest in because there is no way you are going to fit all of them in your kitchen.

There are various ways of preparing food nowadays. Although you can use different cooking gadgets to cook separate meals, some devices can multitask.

There is some controversy when it comes to roaster ovens and crockpots. A lot of us wonder which one is better and what the difference is.

A roaster oven can cook various meals, and it has different settings. You can steam, roast, slow cook, and fry food in it. A crockpot, on the other hand, supports only slow cooking. A crockpot is simply a slow cooker.

Although the two kitchen appliances have some differences, they are still compared from some angles. You can use both of them to slow cook your meat.

Yes, I said it. You can use a roaster oven as a slow cooker. You just need to set the right temperature, and you are set.

Join me as we ponder the question; how do a roaster oven and a crockpot compare? Let’s dive in.

Similarities of a Roaster oven and a Crockpot

We have already established that a crockpot is just a slow cooker. Although people use a roaster oven for fast cooking, you can still use it for slow cooking.

Other than that, you can use the two cookers for slow cooking; what other similarities do they share? Read on.

One significant similarity between these two gadgets is that you can cook the same food.

The crockpot will take longer to get the food ready, but the cookers will give you fried beef if you want fried beef.

The food prepared using these two kitchen appliances tastes the same. Although some people are willing to swear on their lives that slow-cooked meat tastes better, it is hard to tell the difference unless you are an experienced chef.

Which One is Better; Roaster Oven vs. Crockpot

No one wins the argument about what appliance is better. Is it the crockpot, or is it the roaster oven? It all comes down to your preferences.

In this section, I will compare these two kitchen appliances, and you will decide which one fits your needs best. Stay with me.

The roaster oven is one of the highly versatile cooking gadgets on the market today. You can use it for cooking various dishes ranging from roasting a chicken to steaming vegetables.

This oven allows various temperature settings to cook the food you need however you need it. Can you imagine having one oven that you can use for cooking most of your meals?

Some of the ways you can use a roaster oven are;

● Roast a turkey or chicken

When cooking, you can even reuse the cooking pan without washing it if you use an insert.

Although you can use a crockpot for cooking various meals, it does not allow many temperature settings. You can only slow cook using a crockpot.

It is possible to cook some meals that require high heat, but it will take time. You will find that it will take you around seven hours to cook a meal in a crockpot.

The same meal would have taken around one and a half hours in a roaster oven.

Some of the meals you can make with a crockpot are;

The primary difference between a roaster and a crockpot is the versatility of temperature settings.

2. The Taste of Food

The topic of which cooking gadget cooks better food is vast. I remember watching different chefs, and all of them had different opinions.

One said that beef stew cooked using a crockpot was tastier, while another disagreed.

So, I decided to try it myself. I cooked beef stew with a crockpot, and then I cooked the same beef stew using a roaster oven.

Here is what I figured:

● The beef stew I cooked with the roaster oven had a deeper consistency than that I cooked with a crockpot. Not that the crockpot stew was not thick. It was just a bit shallow.

● The meat in both the stews was soft. The one I cooked with the crockpot was softer, and I could even cut it with my tongue.

It is hard for me to say which cooking appliances cook tastier food in this context. I have given my findings; now it is up to you to decide which one is better.

A roaster oven works by distributing heat equally throughout the pan. Due to this, you do not have to keep turning your food to cook both sides.

The newest models of roaster ovens have automatic heat regulations and are controlled by dials.

The crockpot works by slowly simmering food until it is ready.

A significant advantage of this pot is leaving it unattended for the cooking duration, and the food will not burn. It slowly distributes heat throughout the food, thus slowly cooking it.

It has just low-temperature settings. That is why it is a slow cooker.

When choosing between a roaster oven or a crockpot, I will select a roaster oven. You can use it to slow cook and to cook quick meals.

Now that I have compared these two cooking gadgets, you can choose the one you love most. If you have some room to spare in your kitchen, you can buy both.

A while back, I bought a Cuisinart blender, and after a while, the blade stopped working. After troubleshooting, I found out that the blade wasn’t moving. The blade was probably just stuck, and I could do a few things to sort it out.  The troubleshooting a friend recommended worked. The blade had accumulated some residues,…

Which is the Best Blender For Juicing Fruits and Vegetables? If health and nutrition is your priority, then you know that blending fruits and vegetables is a fantastic way to pack a load of much-needed nutrients in one delicious drink. Not only do smoothies satiate your hunger and stop you from reaching for the dreaded…

The main reason why a Keurig 2.0 might not work after a power outage is that it has short-circuited. This problem is mainly brought about by a power surge when you do not disconnect this appliance during a power outage.  Power outages are very frustrating on their own. Imagine dealing with a non-functional coffee maker,…

I just so happen to be a busy bee in the kitchen. As such, pressure cooking is the way to go for me. It offers faster cooking. Dare I say that it cuts down cooking times by almost 70 percent. It is worth noting that this method of cooking helps in cutting down on energy…

Cooking in cast iron comes with a lot of advantages. I love cast iron because its surface is naturally non-stick, it has exceptional heat retention and it also has unbeatable durability. Cast iron is virtually indestructible. Cleaning Cast Iron Utensils made of cast iron usually come with a list of several things you should not…