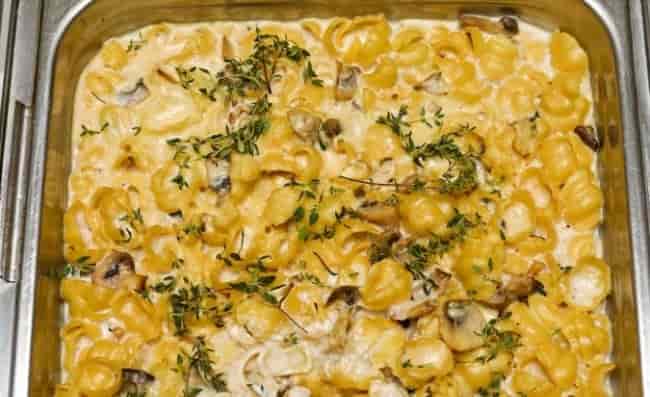 Mac and cheese is a fantastic dish. You use two primary ingredients to make mac and cheese; cooked macaroni and a creamy cheese sauce.

Mac and cheese variations differ depending on where you are from. Most people garnish it with breadcrumbs or grated cheese.

In my opinion, sauce is the most crucial ingredient in mac and cheese. You make it by combining melted butter with flour to make a roux, then add in milk and stir until it thickens.

So what happens when you don’t have milk? There are several substitutes, dairy, and non-dairy that you can use in place of milk when making a sauce for mac and cheese.

Why does my Mac and Cheese Curdle? Click to Read.

You can use sour cream instead of milk when making mac and cheese. Its consistency is thicker and flavor more complex.

The tangy flavor of sour cream enhances the mac and cheese taste, and the thick consistency makes it creamier.

If you choose to use this substitute, add fresh garlic to the dish to break its acidity.

Cream cheese is arguably the best substitute for milk in mac and cheese. Its mild flavor is similar to that of milk. However, its consistency is much thicker.

Therefore, your mac and cheese will be creamier than you are used to. I recommend skipping the butter when you use cream cheese.

You can substitute milk with cream and cheese in equal amounts.

Also, Check Out: Why Is My Cheese Sauce Gritty?

Plain yogurt makes for an ideal substitute. Like sour cream, it has a thick consistency and tangy flavor. Therefore, your mac and cheese will be creamier with a complex flavor.

I recommend using Greek yogurt because it gives better results.

If you have heavy cream in stock, you can use it as an alternative. Heavy cream’s fat content is higher than that of milk, so it would be best to reduce the amount you use in your recipe.

I suggest adding it little by little until you reach the ideal consistency. Alternatively, mix it with some water to thin it out.

Whipping cream makes for an ideal alternative. It has a thicker consistency than milk, so your mac and cheese will be creamier.

If you use this substitute, you can skip the butter because it will give your sauce a rich flavor.

The downside of whipping cream is that it will alter the color of your mac and cheese. If you want it to turn out yellow, you may have to use bright cheese, e.g., orange cheddar.

To use evaporated milk instead of milk, add equal parts of water to it before adding it to your sauce. The sauce will have a distinct and overwhelming caramelized flavor if you don’t.

For the best results, use the exact amount that your recipe calls for.

Some people prefer goat milk because it digests faster than cow milk. You can use it as an alternative to milk in mac and cheese because the two have a similar flavor and consistency.

If you want your cheese sauce to be less tangy, I suggest trying this substitute.

If you don’t have fresh milk in stock, you can always use powdered milk. Mix the powdered milk with water and use it the same way you would milk.

The flavor of powdered milk is sweeter than milk. However, it is not overwhelming. It complements other mac and cheese ingredients.

Manufacturers make coconut milk using water and coconut flesh. It makes for a good alternative for milk in mac and cheese.

Generally, coconut milk is creamy, so you are likely to end up with a creamier cheese sauce. It also has an intense coconut flavor that may slightly alter the taste of your mac and cheese.

If you don’t want to use dairy, use almond milk. Its flavor is relatively neutral compared to other non-dairy substitutes.

Almond milk has a thinner consistency than milk, so your mac and cheese may not be as creamy as you are used to. To make it creamier, add a food-grade thickener.

This nut-based milk is made from cashew nuts. It has a mild flavor similar to milk, and its consistency is very smooth.

Cashew milk is an ideal substitute because it complements other mac and cheese ingredients.

Additionally, it is unlikely that anyone would notice you used cashew milk instead of regular milk.

You can substitute milk with cashew milk in equal amounts. I recommend using unsweetened cashew milk for the best results.

This plant-based milk is also a good alternative. If you choose to use soy milk, use the unflavoured varieties. Flavored soy milk may significantly alter the flavor of your mac and cheese.

Although oat milk is sweeter than milk, it makes an ideal substitute for mac and cheese.

Oat milk is my go-to non-dairy substitute because it is delicious and filling. Additionally, it does not have a distinctive flavor that other nut-based milk varieties have.

Manufacturers make rice milk using water and milled rice. In terms of consistency, it is thinner than milk but still makes for a decent alternative. It also has a sweet flavor.

If you choose to use this alternative, you should add a thickener to achieve the same consistency that milk gives you.

Hazelnut milk is perfect for vegans. Its flavor is mild and complements other mac and cheese ingredients.

The downside with this substitute is that it is expensive.

Pea milk has a slightly bitter flavor, but the cheese in your mac and cheese will mask the bitterness. It is a healthy alternative because of its high protein content.

Use it the next time you run out of milk.

Sesame is seed milk with a high calcium content. It has a creamy consistency and mild flavor, making it a suitable alternative for milk in mac and cheese.

You can use macadamia milk as an alternative because its consistency is similar to that of milk, and its flavor is butter-like.

Hempseed milk isn’t too common in most American households, but you can use it to replace milk if you have it in stock.

This alternative contains approximately the same amount of fat as regular milk. The only downside is that hempseed milk has a distinct nutty flavor. Although most people won’t mind the nutty flavor, it may be unpleasant to some.

Only use this alternative if you like the taste of hemp seed milk.

No one enjoys runny mac and cheese.

Do these substitutes work in all mac and cheese recipes?

If you wonder whether the substitutes discussed above work in all mac and cheese recipes, the answer is yes.

All the alternatives work well in different mac and cheese recipes. Therefore, it is up to you to choose which one best suits your preferences.

Can you skip the milk altogether?

Generally, mac and cheese does not require a lot of liquid to prevent the powdered cheese from being too sticky.

Most people add milk because its flavor is mild, it isn’t too watery, and it isn’t too creamy. However, you can skip the milk altogether.

If you don’t want to use any milk, use butter or cream cheese and melted cheese in its place. Additionally, don’t use powdered cheese because you’ll need a lot of liquid if you do.

Instead, use shredded cheese. The best way to go about it is to melt the butter and cheese in a different pan and add the cooked macaroni.

Alternatively, you can use whip cream as an alternative to milk. Your cheese sauce will be creamy and delicious.

Substitutes for butter in mac and cheese

If you don’t have butter or need to substitute it for whatever reason, use ghee or margarine.

You can use these two substitutes the same way you use butter to make a roux for your cheese sauce.

If you were to use butter to enhance the consistency of your cheese sauce or as a flavoring agent, substitute it with cream cheese, heavy cream, melted margarine, or melted ghee.

I hope this article helped you discover the possible substitutes for milk in mac and cheese.

If you are unsure about the replacement to use, try one by one until you get the one that suits you best.

Quite often, you can feel overwhelmed with the busyness and craziness that is synonymous with preparing a Thanksgiving meal. From limited oven space to forgotten ingredients, even if you are a seasoned cook, pressure can be a tragic accompaniment during this period. So you are wondering What Can I Make Ahead For Thanksgiving? Well, the good…