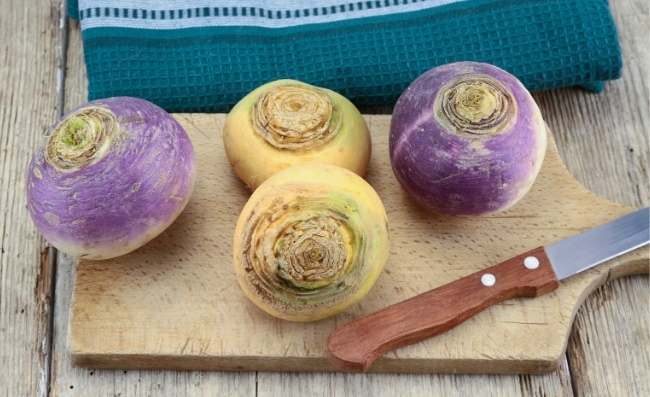 Ever heard about cruciferous vegetables?

Well, turnips are an example of such, and boy do they pack a punch in terms of flavor and nutrient value.

Cruciferous vegetables are a diverse group of vegetables that include plants such as broccoli, cauliflower, cabbage, kale, and radishes.

The word cruciferous is a word for classification that is borrowed from the Latin word Cruciferae which simply means “cross-bearing”. This is due to their petals resembling a cross.

Generally speaking, the taste in turnips varies in relation to the age or level of maturity of the turnips as well as the variety of turnips that you have with you.

The taste is also dependent on the way that you cook and prepare the turnips.

Thus, the simple answer to what turnips taste like varies because, in essence, they are very unique in characteristics.

Much younger or less mature turnips tend to be sweeter and crunchier, much like carrots, as compared to mature turnips which taste more like potatoes.

It is worth noting that baby turnips can be delicious whether raw or cooked but the same does not apply to the mature ones since they are bitter when raw but become sweeter once cooked correctly.

In terms of size, smaller turnips have been known to be tangier in taste with larger ones having a more woody taste to them.

As a bonus, the leaves of turnips are also edible and that means that we will not end up wasting any bit of this crop.

What do turnips taste as you ask?

Well, depending on the variety of turnip you have and the size of the turnip, smaller turnips are much sweeter and palatable even when raw.

Their larger counterparts are bitter to taste when raw and require proper cooking to leach out some of the bitterness.

How do you harvest turnips?

Turnips are generally harvested when the roots are big enough to eat. You should not let them grow too big because they will become ‘woody’, fibrous and they become strong flavored.

Turnips are supposed to be harvested green, young and tender. You cut the outer leaves around an inch from the crown of the turnip. This takes about 40 to 50 days after you sowed them.

When harvesting, what you would want to do is to loosen the soil around the plant, so that you can lift the roots carefully from the ground so as not to ‘injure’ or break them.

It is recommended to do this when the soil around is dry. Once you have lifted the roots from the soil, gently twist off the greens as this will greatly help extend the freshness of the root.

How to store turnips to ensure a longer shelf life

When storing turnips, store the best. If you have any that got damaged or bruised during harvesting, they should be eaten as they will not store well.

You gently rub the soil off the roots before storing them. Do not wash the roots and if you do, make sure to thoroughly dry them.

Generally, you should store turnips in a cold and moist place. Wrap them with a moist cloth or a paper towel, put them in a perforated bag, and place the bag in the vegetable compartment in the fridge.

The idea is to get them near to freezing without actually freezing them. When stored like this, they should stay fresh for about 4 – 5 months.

Are turnips a good substitute for potatoes?

Turnips are ideally a good substitute for potatoes since they have a similar texture to them.

The best part about turnips is that they take quite well to seasoning and can be cooked the same way as you would potatoes.

Additionally, they can be sliced into fries, they can also be diced, roasted, or made into a puree. Turnips are versatile in that they work well in soups and stews alike.

Although they do not have the same rich nutrient content as potatoes, turnips are a great low-calorie alternative.

How do you get rid of the bitter taste in turnips?

Just follow these simple steps and you will be able to eliminate the bitter taste that certain turnips usually contain.

To begin with, you can go the route of pickling your turnips. When you use the smaller, crispier turnips, their texture makes for amazing pickles.

To achieve pickled turnips, you simply take a turnip and cut it in half then submerge it in a brine made up of a white vinegar base and place them in the refrigerator for a week or so.

Further, turnips can be prepared by baking them, boiling them into soups and stews, steamed, mashed, roasted, fried, or even raw.

Can you eat raw turnips?

Well, that depends. Are you a fan of bitter-like tastes? To be fair to the white purple topped vegetables, raw turnips are an acquired taste. The older and tougher they are, the chewier and less pleasurable when eaten raw.

To make them more palatable while raw they can be sliced and enjoyed with dips, added to the top of a salad, or shredded and added to coleslaw.

They are considered a healthy treat. Low in calories, high in calcium and vitamin C. The greens too are a good source of vitamins E, A, and C. It also contains the minerals magnesium and potassium essential to muscle function.

They have a faint odor when cut and cooked but the longer you cook a turnip the more pungent chemicals you will produce and the stronger the odor will be.

They also make us stink. Turnips are plants that belong in the genus Brassica that contain sulfur (yes, you guessed it right that rotten egg smell).

When we eat foods rich in sulfur, the potent odor tends to permeate our bodies and drive people away.

Fun facts about turnips that you probably did not know

The very first time I heard of capers, I thought they were a form of chilies. Can you imagine the ignorance? However, in order to save you the embarrassment, I faced when I confidently blurted out my not-so-right assumption in front of people, In this article, I will endeavor to explain what exactly capers are,…

Ground beef is a staple ingredient in most kitchens. It is popular because it is pretty versatile, and you can turn it into several tasty dishes. You can use ground beef to make meatloaf, burger patties, meatballs, cottage pie, lasagne, and many other dishes. You can always combine ground beef with less costly ingredients like…