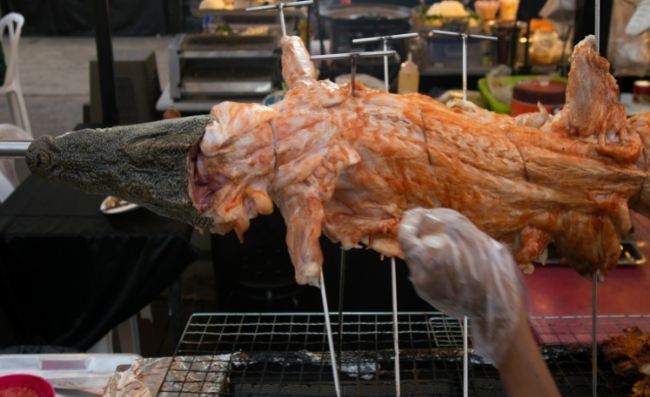 My friends know how much I like trying out different dishes, especially those that are not too popular. So I had to find out, what does crocodile meat taste like?

Crocodile meat happens to be one of those dishes that I just had to try and satisfy my curiosity.

I have come across several restaurants that have crocodile meat on the menu. If you happen to be in one of them and are considering trying it for the first time, you may be wondering what crocodile meat tastes like.

Or you probably spotted crocodile meat at your local grocery store and are considering buying it but you are not sure whether it will be worth your money.

This article will give you all the information you need to know about crocodile meat so that you make an informed decision.

Its taste, texture, nutritional value and so much more. We will even discuss a few facts that you will find fascinating. Let’s dive in.

Compared to chicken, crocodile meat has a mild flavor. It may also have a slight fishiness depending on where the crocodile was caught and how it was harvested.

The white crocodile flesh has a tender but firm texture, and you can easily flake it apart. However, it may not come apart very easily the way fish does.

Where the meat is cut from greatly influences its quality. From my experience, meat cut from the tail tastes best and is very tender.

Once you cook it, flesh that remains on the bone forks away easily the same way meat on slow-cooked ribs does.

I recommend trying meat from Australian saltwater crocodiles. They are popular for their clean white meat and their light flavor.

How Tough is Crocodile Meat

I have met several people who claim that crocodile meat is very chewy and tough. I reiterate that how you cook the crocodile meat plays a big role in how it tastes and its texture too.

If you find the crocodile meat chewy and tough, chances are that it has been overcooked. Just like seafood, crocodile meat tends to turn into leather when you leave it on the heat for too long.

The best way to cook crocodile meat is by pan-frying it. Use high heat for a short period of time. I usually fry mine for approximately two minutes on each side.

You can fry for two minutes or until the meat reaches medium-rare. It is also important that you let the crocodile meat stand for a few minutes before you serve it.

Click to find the Best Food Processor for Meat Grinding.

If you buy frozen crocodile fillet, don’t bother thawing it before frying. Chefs recommend that you cook the fillets when they are still frozen because when defrosted, the fillet loses moisture and flavor.

Some crocodile meat has a funky gamey taste that you may not find pleasant. To get rid of it, soak the fillet in a pint of milk mixed with a tablespoon of salt for three hours.

The meat will have a milder taste its texture will also be softer.

Crocodile sausages and crocodile burgers have a much softer texture compared to steak. They still taste the same as crocodile meat.

How long does deli meat last? Click to learn.

The Taste of Crocodile Meat in Comparison to Alligator Meat

The flavor of crocodile meat and that of alligator meat are very similar. A lot of people say that they both taste like chicken. Despite being similar, there are a few notable differences.

To neutralize the flavors of both crocodile meat and alligator meat, brine them in milk that is mixed with a tablespoon of salt. Doing this will get rid of the gamey flavor.

Is the Meat Healthy?

Crocodile meat is actually very healthy. It is lean and is high in protein and low in fat.  It contains Omega-3 fatty acids and dietary fiber. It also contains vitamins, phosphorus, and niacin.

Since crocodile meat is high in protein and low in fat, it appeals to those who want to shred fat. It also appeals to bodybuilders.

If you fall in any of these two categories, then you should definitely consider spending some extra coins on crocodile meat because it definitely suits your dietary requirements.

Despite the fact that crocodiles are reptiles, their meat is very similar to calamari or chicken. If you cook it properly, it is tender and you can easily chew it.

If you are wondering whether it will be worth your money, the answer is both yes and no. From my personal experience, crocodile meat does not exactly have that ‘wow’ factor.

Its flavors are neither overwhelming nor pungent, but the experience would not exactly be ‘unforgettable’. It does not give you that mouth-watering food extravaganza that you hope it will.

If you have never tried crocodile meat, you can try it out to satisfy your curiosity. You can order crocodile meat at a restaurant the next time you see it on the menu or prepare it yourself.

If you choose to prepare it yourself, remember not to overcook it otherwise it will be tough, chewy, and not pleasant to eat.

Let me know how you find crocodile meat in the comments below.

Chicken is a popular dish in most American households. Every year, Americans consume billions of chickens.  Chicken is quite versatile. You can roast, braise, boil, grill, or even bake. It also has great dietary value and nutritional value. Other than that, chicken is very affordable compared to pork, turkey, and beef. Most people also prefer…