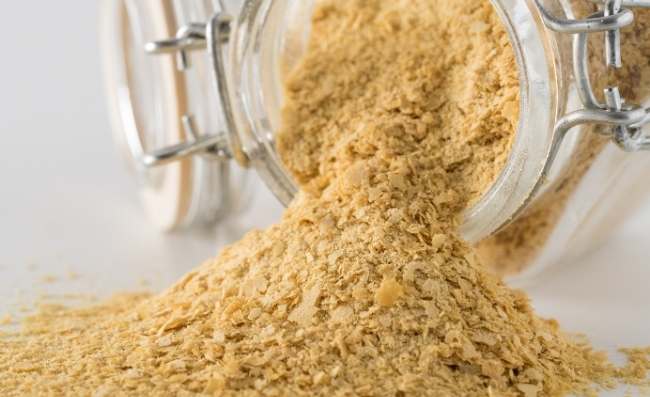 Nutritional yeast is one ingredient that I can’t live without. It has an amazing flavor and it also has great nutritional value. What’s not to love?

Unlike baking yeast, nutritional yeast does not have a leavening ability. It neither froths nor grows.

Nutritional yeast should not be substituted with baking yeast or active dry yeast. You’ll end up with a huge mess because these yeasts are alive.

There are several brands of nutritional yeast in the market. I’d be the first to admit that some brands are better compared to others. To find the one that suits you best, you can buy a little of each and try them out.

You can either use the powdered version of nutritional yeast or the flaked version. It is all up to you. Both versions work just fine.

We’ll get into the details of these substitutes a bit later, for now, let’s talk about nutritional yeast a bit more. Knowing exactly what you are substituting plays a major role in choosing the best substitutes.

How to use nutritional yeast

Trust me, your pasta will taste way better with some nutritional yeast in it. Just sprinkle some of it onto your pasta and you are good to go.

Also, Click to find The Best Food Processor For Baking.

Another benefit is that nutritional yeast is gluten free. This makes it ideal for everyone on a gluten-free diet.

Nutritional yeast also contains vitamin B12. This is a plus because plant foods do not contain vitamin B12 unless it is added as a supplement.

You may want to substitute nutritional yeast with something else for several reasons.

Maybe you ran out and you just need a quick fix, or you can’t find it at your local grocery store, or you simply do not like the taste and you want to try something else. Whatever the reason, you can try any of these substitutes.

Brewer’s yeast is arguably the best substitute for nutritional yeast. It is a single cell organism that feeds on sugar. It excretes alcohol and carbon dioxide. Brewer’s yeast is usually removed from beer. It is then dried and deactivated. After that, it is processed into a powder or flakes.

Just like nutritional yeast, brewer’s yeast is packed with nutrients. It is particularly rich in protein. Brewer’s yeast gets its nutrients from feeding on the grains that are used to brew beer. It has both trace minerals and amino acids.

You can use soy sauce as a substitute for nutritional yeast. Soy sauce is made from fermented soybeans. Soy sauce has an umami flavor that makes it the perfect addition to savory dishes.

While using soy sauce as a nutritional yeast substitute, you should know that it has a high sodium content. Therefore, be careful not to add too much to your dish as it may become too salty.

You can use parmesan cheese as a substitute for nutritional yeast. Parmesan cheese is not a vegan option, so if you are keen on maintaining a vegan diet, use another substitute.

The only downside with parmesan cheese is its sodium and cholesterol content. It is not as nutritious as nutritional yeast.

I’m pretty sure you have come across marmite and vegemite. These are the most common brands of yeast extract.  Both brands work well when used as a nutritional yeast substitute.

Most people find the taste of marmite overbearing, so I suggest adding it to your dish little by little. If you add too much at once it may overpower your dish.

Vegemite is milder compared to marmite. So if you are worried about marmite overpowering your dish, use vegemite instead.

Yeast extract has savory notes, so I recommend using it as a nutritional yeast substitute in stews, soups, and gravies.

Vegetable bouillon is a very common ingredient in every vegan kitchen.

It is made by vegetables being simmered and boiled down to make a flavorful concentrate. Vegetable bouillon has a very rich flavor. It is also readily available in any grocery store.

Vegetable stock naturally has a very high liquid content, so keep this in mind when using it as a nutritional yeast substitute. I suggest using it in soups and stews for the best results.

If you want a substitute that won’t add extra liquid to your dish, stock cubes would work just fine.

Stock cubes are less tasty compared to nutritional yeast, so you may have to use a little more than your recipe requires.

What can I use as a Peanut Butter alternative? Click to Read.

A tablespoon or two will most definitely enrich the flavor of your gravies, soups, and sauces. You can use more when making ‘cheese sauces’ and eggless scrambles. They will taste amazing.

Nutritional yeast is not a staple in my kitchen. I do not always have it in hand, which is why I had to research the possible substitutes.

Most of these substitutes work quite well. If you are not vegan, I suggest using parmesan cheese as a nutritional yeast alternative. These two have a similar flavor and you can easily mistake one for the other.

You can use any of the substitutes we have discussed above depending on which one you have on hand and which one suits you best. I am positive that your dishes will turn out fine.

Have you ever tried making chili? It is quite an amazing addition to any delicacy if you ask me. What’s more, you can serve it to vegetarians and non-vegetarians too! So if you are having a party at home and unsure about what to use to spice up your meal, you should try making your homemade…

If you are like me you have several questions about tortillas. How long are tortillas good for? Do they expire or go bad?  How do you store them so that they have a longer shelf-life? Well, you would be glad to know that I have answers to almost all your questions. First things first, what…

If you want your hamburger to be irresistibly delicious, you need to use a hamburger helper. The hamburger helper enhances the taste and appearance of your hamburger. Milk is one of the key ingredients you will need to make an extraordinary helper, but if you run out of milk, you can always use a substitute…

Adobo seasoning is a flavorful spice mix. It is quite popular in Spain, Mexico, the Philippines, and part of South America. It is mildly spicy, hence appealing to most people. Adobo seasoning has several uses, but most people use it as a rub to enhance the flavor and color of meat. All you need to…