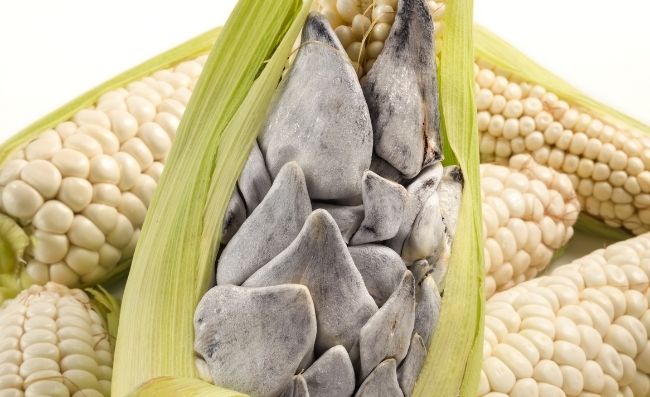 Huitlacoche (pronounced whee-tla-KOH-cheh) is a soft, dark-colored, and spreadable ingredient. It is also commonly referred to as Mexican truffle, corn smut, or fungus.

Huitlacoche is basically a plant disease that grows on corn, specifically around the kernels and the ears of corn. It is usually inflated and grey in color.

Huitlacoche greatly resembles river stones. In the culinary world, huitlacoche is an ingredient used in a variety of dishes including sauces, soups, and enchiladas.

The origin of huitlacoche can be traced back to Mexico. The name itself is Nahuatl, a language that is spoken by Aztecs. A lot of people in Central Mexico still speak Nahuatl to date.

Back then, maize/ corn was a staple in the Aztecs’ diet. Therefore, they came across huitlacoche on several occasions. The locals mostly used the fungus in stews and tamales.

The Native American Zuni and Hopi tribes also used huitlacoche in their diets from a long time ago.

People of the Zuni tribe believed that huitlacoche symbolized the ‘generation of life’. Therefore, they held it in very high regard. The Hopi tribe called it ‘nanha’.

Indigenous peoples of the Southwest incorporated huitlacoche into their dishes for several centuries.

In fact, they used it in their ceremonies and also for medicinal purposes.

Also, Check out: What is a substitute for cardamom pods?

Huitlacoche is very rich in protein. It has more protein content compared to corn. It also contains an essential amino acid, lysine, which is not found in corn.

Let’s face it, letting plant-ruining diseases creep up on your crops is not something every farmer would be okay with. Farmers outside Mexico always destroy plants that get infected with any disease. At the moment, there are new strains that are resistant to plant diseases.

The good news is that culinary awareness has made huitlacoche quite popular. It has even become a delicacy in the United States.

People in the United States started using huitlacoche in 1989 after Rosa Mexicano restaurants introduced it in their menu. A lot of people took interest in it and started incorporating it into their dishes.

What is a suitable Gochujang substitute? Click to Read.

Huitlacoche season is basically the same as the corn season. However, with huitlacoche, you do not wait to harvest them when they are ready.

What can I substitute for White Balsamic Vinegar? Click to Read.

Where to buy huitlacoche

Most Mexican food specialty stores stock huitlacoche. You can also buy them at Mexican grocery stores or farmers’ markets.

Huitlacoche is usually frozen in cans or jars. Incorporating huitlacoche into dishes is quite easy since you do not have to remove it from the corn yourself. There is also no need to prep it at all.

In case you stumble upon huitlacoche in your farm or garden, harvest them when they are puffy and light gray in color. The ones that are firm are usually very bitter because they are overripe.

I suggest picking huitlacoche that forms on the corn ears instead of the ones on the stem.

The ones you harvest from the corn years usually have an amazing earthy-corn taste.

It is important that you store huitlacoche properly so that they last for a long time. Fresh huitlacoche should be stored inside the refrigerator.

Just store them the same way you store mushrooms. You should know that fresh huitlacoche does not have a long shelf life. Therefore, it is important that you use them in the shortest time possible after harvesting.

The store-bought frozen huitlacoche lasts longer compared to fresh huitlacoche. Once you open your jar or can, store it inside the refrigerator. The huitlacoche will be safe to use for several weeks.

How to use huitlacoche

Huitlacoche is one of the easiest ingredients to use. Since it is a soft fungus, and technically a vegetable, you can use it raw. My favorite thing about store-bought huitlacoche is that I never have to shred, chop, or puree it before use.

The fresh huitlacoche can also be thrown into dishes whole. Alternatively, you can use your fingers to delicately tear it apart.

When you use heat on huitlacoche, it turns black, so do not be surprised when it does. In fact, most dishes that have huitlacoche as one of their ingredients usually have a dark hue.

You can use huitlacoche in sauces, stews, beef, chicken, quesadillas, and corn. Huitlacoche also complements cheese, especially in quesadillas.

I personally like sautéing my huitlacoche then adding them to my dishes for that earthy flavor. To make a sauce for my steak, I usually puree it with cream. It is the most delicious steak sauce I have ever had.

I absolutely love huitlacoche quesadillas. In this recipe, I usually use corn tortillas because that is what is used to make authentic Mexican quesadillas.

I do not recommend using flour tortillas in this recipe. Without wasting any more time, let us jump right into the recipe.

Step one: Preparing the filling

Serve two quesadillas per person with green or red salsa on the side.

Ground beef is a staple ingredient in most kitchens. It is popular because it is pretty versatile, and you can turn it into several tasty dishes. You can use ground beef to make meatloaf, burger patties, meatballs, cottage pie, lasagne, and many other dishes. You can always combine ground beef with less costly ingredients like…

Rambutan is an exotic tropical fruit that thrives in warm climates. It’s an interesting fruit. So, have you been wondering -What Does Rambutan Taste Like? When in season, you can spot them in street markets in Vietnam, Malaysia, Thailand, and Indonesia. In terms of appearance, they are very unique. They are bright red in color…