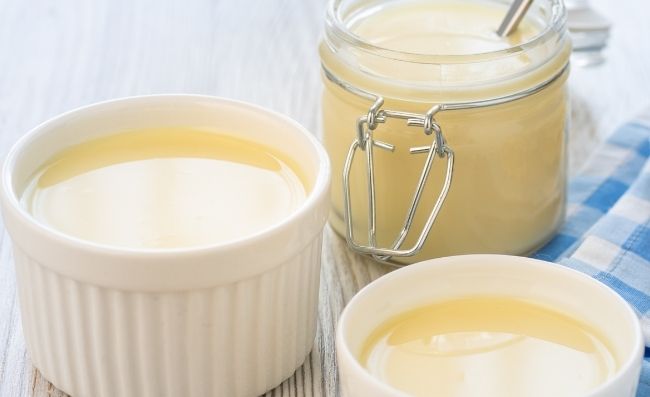 People often confuse evaporated milk with sweet condensed milk and vice versa. Until recently, I also had a problem differentiating the two. The fact that they both come in cans that are almost identical does not help at all.

Evaporated milk and sweetened condensed milk are different. Although the difference is small, it has a significant impact on recipes.

Let’s start with the basics. Both evaporated milk and sweetened condensed milk are varieties of concentrated milk.  They both begin as fresh milk.

Manufacturers take the fresh milk through a vacuum process. During this process, approximately 60% of the water in the milk is removed.

The difference is caused by what happens after this process. For evaporated milk, the concentrated milk is poured into cans that are then heat sterilized.

With sweet condensed milk, manufacturers usually add sugar to the concentrated milk before canning it.

Also, Check out: How to Tell If Sweet Condensed Milk Is Bad

Usually, they add about 2 cups of sugar per 14-oz. can. I believe it is safe to say that sweet condensed milk is evaporated milk that contains sugar.

Sugar also prevents the growth of bacteria. Therefore, sweet condensed milk is not heat sterilized the way evaporated milk is. It also doesn’t have the caramelized flavor that evaporated milk has.

Can I freeze milk in Ziploc bags? Click to find out.

As discussed above, evaporated milk arises when about 60% of water content is removed from milk. It is then packaged in cans and heat sterilized.

Evaporated milk is usually creamy, dense, and very concentrated.  Since it is heat sterilized, it has a darker color compared to regular milk. It also has a distinct caramelized flavor.

Evaporated milk is used in both sweet and savory dishes. It gives good results in recipes that seek a creamy texture without adding extra sweetness.

What is the Best Substitute For Evaporated Milk? Click to Read.

With sweet condensed milk, 60% water content is removed and sugar is added to the milk. Condensed milk contains approximately 45% sugar.

Although they have several differences, sweet condensed milk and evaporated milk have a few similarities.

Both products have a long shelf life and the risk of spoilage is minimal. Sweet condensed milk contains a lot of sugar which acts as a preservative and evaporated milk is heat-sterilized before it is packaged.

Both sweet condensed milk and evaporated milk are packaged in cans. They are both readily available since most grocery stores stock them. You’ll find them on the baking aisle of the grocery store.

Both of these milk products are essential ingredients in various recipes. I have come across several recipes that call for sweet condensed milk and several that call for evaporated milk. You just have to be careful not to mix the two up.

Can You Substitute Condensed Milk With Evaporated Milk?

This is a very common question, and I’m here to clarify everything for you today. For starters, the plain answer is no. Despite the similarities between sweet condensed milk and evaporated milk, you cannot substitute one for the other.

If you use evaporated milk in a recipe that calls for sweet condensed milk, you will end up with a very bland dish that no one will enjoy.

If you use sweet condensed milk in a recipe that calls for evaporated milk, you will end up with a dish that is too sweet for your liking.

You also can’t add sugar to evaporated milk and make a suitable substitute for sweet condensed milk. The difference between the two is significant because the sugar in sweet condensed milk usually becomes concentrated and adds a caramel flavor to dishes. I recommend sticking to what the recipe requires you to use.

You won’t have to rush to the store to buy evaporated milk when you have any of these substitutes in hand.

Also, Check out: A list of Suitable Whole Milk Substitutes.

When using milk as a substitute for evaporated milk, you’ll have to use another ingredient to thicken the milk. You can either use all-purpose flour or cornflour.

In case you are using it as a substitute in baking, you can adjust the number of dry ingredients upwards and also add a little bit of sugar. This way you will achieve a similar texture and flavor.

Heavy cream and evaporated milk are very similar. They both have the same consistency.

You can substitute evaporated milk with heavy cream in equal amounts when making casseroles, pie fillings, sauces, custards, and soups. You can also use it in baking and frozen desserts.

Always keep in mind that heavy cream has a high-fat content and may not be ideal for people watching their calorie intake.

Compared to evaporated milk, half and half have a higher fat content. It is also lower in carbs and is therefore ideal for people on a low-carb diet.

If you are lactose intolerant, you can use non-dairy milk in recipes that require you to use evaporated milk. Like regular milk, you have to make a few adjustments in order to achieve a consistency that is similar to that of evaporated milk.

One option is to heat the milk in order to reduce the content. I highly recommend doing this, especially if you are using soy milk and rice milk.

You can also use almond milk, quinoa milk, hemp milk, and coconut milk in recipes that call for evaporated milk.

Once you reduce the water content, you can substitute evaporated milk with non-dairy milk in equal amounts.

Powdered milk is milk whose water content has been completely removed. Just like evaporated milk, it has a very long shelf life.

To use powdered milk, people usually add water. You can do the same if you want a substitute for evaporated milk. All you need to do is reduce the amount of water you usually add by half.

You can also add powdered milk directly to your dry ingredients when making pancakes and cookies. It will give you good results

When you run out of sweet condensed milk yet your recipes call for them, you can use these substitutes.

If you use milk powder, you’ll also have to add some margarine and boiling water. The process is very straight forward, and you’ll have your sweet condensed milk in no time.

Be careful not to confuse cream of coconut with coconut cream as the two are entirely different and will give you different results.

You can also make homemade dairy-free condensed milk using non-dairy milk. You can use soy milk, oat milk, rice milk, coconut milk, or almond milk depending on your preference.

Simply reduce the water content in the milk and add sugar for the perfect homemade dairy-free condensed milk.

A lot of people tend to confuse rambutan with lychee and vice versa. I personally had a problem differentiating the two some time back as well. Both rambutan and lychee are tropical fruits. They have a few similarities, but they also have very many differences. Seeing that lychees and rambutans are different. It is rather…

The conversation surrounding boneless and bone-in steaks can be endless, with everyone defending their love for one over the other. The primary and most noticeable difference between these two is that one has a bone while the other does not.  Fort worth ribeye and bone-in ribeye are cuts that butchers cut from the shoulder part…

Most of us grew up eating Ritz crackers. They are a simple snack that has stood the taste of time. In fact, they are so tempting. They have a unique buttery flavor, and you can enjoy them on your own. If you want a more complex flavor, you can top the crackers with cheese or…

Rice vinegar is a popular ingredient in Asian cuisine. It enhances the flavor of dishes by adding a mildly sweet and sour flavor. Most times, rice vinegar is used in sushi rice and dressings. It is also used as a sweetener in various dishes. Most people in the United States do not use rice vinegar…