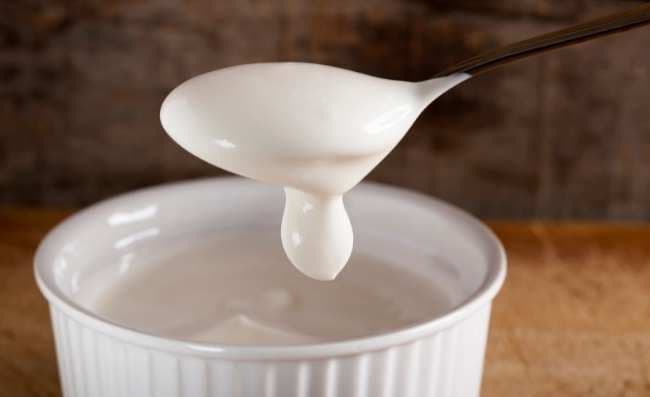 Sour cream is a versatile ingredient that people use to add tartness to their dishes. You can use it in baking, sauces, salad dressings, and so much more.

In normal circumstances, sour cream has a thick texture. However, there are instances when you may want to use it but realize that it is watery or milky looking.

If this happens to you, you may wonder, why is my sour cream watery. You may also wonder whether the sour cream being watery is a cause for concern.

Sour cream turning watery is a common occurrence. Therefore, you should not be alarmed when you open the lid and realize that your sour cream does not have the thick texture you expected.

The reason why your sour cream is watery is that whey has leaked out. Watery sour cream may also be an indication that it has gone bad.

This article discusses whey in detail for you to know what happens for your sour cream to turn watery.

We will also discuss how to thicken watery sour cream, the various signs that your sour cream has gone bad, and what would happen if you consume spoiled sour cream.

Also, Click to learn: Can You Freeze Sour Cream?

Manufacturers make sour cream the same way they make yogurt. They introduce bacteria to pasteurized cream and let it incubate until its lactic acid thickens the cream and gives it a tart flavor.

The watery liquid that sometimes appears on sour cream is called whey. It is not harmful. Instead, it is rich in protein and cream.

Whey is naturally present in milk, but when manufacturers turn milk into yogurt or sour cream, whey is suspended in the cell walls of the milk. It can leak out easily since the chances of you breaking the cell walls are very high.

Something as simple as dipping a spoon in the sour cream can break the cell walls and make whey leak.

Watery sour cream is not necessarily a sign of spoilage. However, it would be best to check for any spoilage signs before using the sour cream.

You can use runny sour cream as it is in marinades, salad dressings, smoothies, and soups since they benefit from the thin texture.

However, if you specifically want the thick texture, there are specific things you can do to make it thick again. Read on to see the various ways to thicken watery sour cream.

How to thicken watery sour cream

There are two methods you can use to thicken watery sour cream. You can;

Adding gelatin is an easy way to thicken watery sour cream. All you need to do is transfer the sour cream into a pot, then add unflavoured gelatin.

For every cup of sour cream, add half a tablespoon of unflavoured gelatin. Note that the more gelatin you use, the thicker the cream will become.

At the same time, you should not add too much gelatin because the sour cream may end up having a gummy texture.

Once you have added gelatin to sour cream, stir the mixture thoroughly until they are completely combined.

On your stovetop, heat the gelatin and sour cream mixture on low heat. Remove from heat once its temperature gets to 140 degrees Fahrenheit. You can use a candy thermometer to determine the temperature.

Let the sour cream cool, then transfer it to an airtight container and store it in your fridge until you are ready to use it.

For this method, you will need a mesh strainer and a cheesecloth or coffee filter. Fold the cheesecloth and place it in the mesh strainer, ensuring that it covers the whole inner part of the strainer.

If you are using a coffee filter, line the mesh strainer with a single layer. Try as much as possible to avoid any overlap.

Once the inside part of the strainer is covered, use a spoon to transfer the sour cream to the strainer. Fill the strainer with the cream, then place it in a bowl. The rim should touch the sides, and the strainer itself should hang into the bowl.

Use plastic wrap to cover the bowl and place it in your fridge for at least three hours. The sour cream becomes thicker if you let it stay in the fridge for longer.

Once the sour cream reaches your desired thickness, remove the bowl from the fridge and transfer the cream to an airtight container. Discard the water-like substance that remains inside the bowl.

Signs that your sour cream has gone bad

Here are a few signs that your sour cream is no longer safe to consume.

Mold is an obvious sign of spoilage. If you see white or green mold in the container containing your sour cream, throw it out because it is no longer safe to consume.

When bacteria grow in sour cream, it manifests by changing the color of the sour cream. Therefore, if you notice that the sour cream has turned yellow, it has gone bad, and you should throw it out.

As discussed above, sour cream can become watery when the way leaks. In this case, the sour cream has not necessarily gone bad.

However, if you notice that the sour cream is overly watery or somewhat clumpy, the chances are that it has gone bad, and you should discard it.

The side of your sour cream container has a best by, use by, and sell-by date.

If you look at the best by and use by date and realize that the sour cream is past the recommended date, the chances are that its quality has deteriorated or it has gone bad. It would be best if you discarded it.

Also, Check out: The Best Cream of Tartar Substitutes. Here.

What will happen if you consume spoiled sour cream?

Like any other spoiled food, spoiled sour cream can give you food poisoning.

People’s bodies react differently, but there are specific symptoms that you are likely to experience. They include; stomach aches, fever, diarrhea, and nausea.

If you notice that your sour cream has gone bad, you should discard it. Consuming spoiled sour cream can result in food poisoning.

There are two possible reasons why your sour cream is watery. The first is that the whey has leaked out, and the second is that it has gone bad.

To be safe, I suggest that you check for any signs of spoilage before consuming watery sour cream.

If you like your sour cream thick, you can use any of the two methods we discussed above to thicken it, but if you don’t mind the thin consistency, you can use it as it is.

Cheesecake is a tasty dessert whose main layer consists of cream cheese, ricotta/cottage cheese, eggs, and sugar. Its base often consists of a layer of sponge cake or crushed biscuits. Making cheesecake is relatively easy, and the chances are it will turn out great. However, if you are new to baking, you may run into…

Most of us grew up eating Ritz crackers. They are a simple snack that has stood the taste of time. In fact, they are so tempting. They have a unique buttery flavor, and you can enjoy them on your own. If you want a more complex flavor, you can top the crackers with cheese or…

Rice vinegar is a popular ingredient in Asian cuisine. It enhances the flavor of dishes by adding a mildly sweet and sour flavor. Most times, rice vinegar is used in sushi rice and dressings. It is also used as a sweetener in various dishes. Most people in the United States do not use rice vinegar…

If you use recipes to make fondue, trifle, clafoutis, Black Forest gateau, or even cocktails, the chances are that you have come across an ingredient called kirsch. Most people use kirsch in recipes for its flavor and alcohol content. If you don’t want your dish to contain alcohol or don’t like the kirsch flavor, you…

Almost all savory recipes start with one common ingredient- onions. I can bet that most, if not all, the savory dishes you’ve cooked in the past month contain onions. Onions are a base for most recipes. Although several people don’t appreciate the distinct onion aroma during cooking, they remain one of the most popular ingredients…