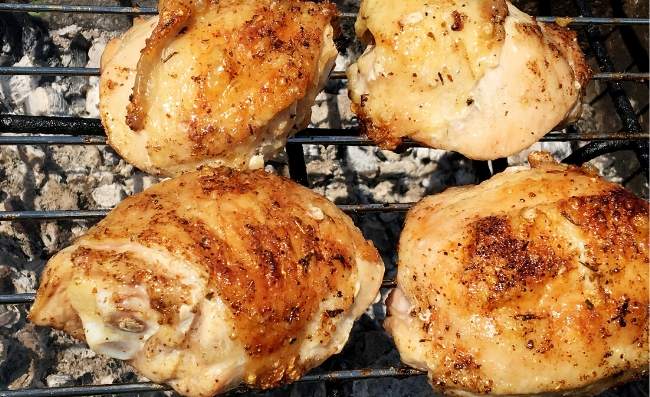 I have come to realize that dealing with food products that can get spoilt can be quite tricky.

Most times, we wonder how long food can be left out at room temperature and still be fit for human consumption.

In case you are wondering whether or not you should eat that chicken you left on the counter overnight, this article is for you.

According to food experts, all poultry, including chicken should not be left out overnight. Bacterial contamination fastens when food is at room temperature and becomes severe after a few hours.

Chicken is particularly very susceptible to bacterial contamination in both its preparation and storage after being cooked.

It should be stored at a low temperature at all times. It should not be left at room temperature. Simply put, if you have no intention of eating the chicken you have just cooked within two hours, refrigerate it or freeze it.

This is because it is prone to spoilage and room temperature puts it in the danger zone. The danger zone is basically a window of time when bacteria quickly spreads over food making it contaminated and unfit for human consumption.

If you have just cooked your chicken but won’t eat it any time soon, cool it as fast as possible within two hours and store it in the fridge to avoid contamination and food poisoning.

The chicken will cool faster if you divide it into smaller containers then you can refrigerate it sooner. In case you attend a function and chicken is being served, ensure it has not been out in the open for more than two hours.

The reason behind all your stomach upsets when you eat at buffets or parties could simply be because the food was left out for too long.

Unfortunately, most bacterial contamination is not detectable by the nose, eye or tongue until it has become severe. The chicken may not have a terrible smell when you leave it out overnight but it can still cause severe illness.

Our senses might not detect the bacteria but that does not mean it is not present.

Millions of living bacteria colonize food when it is left out overnight. Reheating may ‘kill’ some of the bacteria but keep in mind that those bacteria have been eating, multiplying and definitely pooping out toxins.

They won’t all die by cooking or reheating and may end up giving you food poisoning or worse. Bacteria only need heat, moisture, and time to multiply and produce toxins, all of which are present when you leave your chicken overnight so your food will definitely be contaminated.

It is better to be safe than sorry.

Some people claim that as long as you reheat the food in question then it is okay to eat. The fact is you might be able to kill off the bacteria that have colonized the food but you will not destroy their byproducts.

Bacteria like Clostridium botulinum produce highly toxic chemicals and the chemicals remain present whether or not the bacteria is still in the food.

It is a potent neurotoxin that is highly toxic to humans or even pets. It is absolutely not worth gambling with your health by eating food that has stayed out overnight.

Always remember the thumb rule when it comes to chicken. If it has stayed out for more than two hours, throw it out. You’ll save yourself those stomach upsets and the expenses that come with treating them.

My simple rule is unless I am literally starving and eating that food left out overnight is the difference between me living and dying, throw it out.

Food poisoning is dangerous. You’ll experience vomiting, diarrhea, stomach ache, and other major symptoms. The worst-case scenario is that you might even suffer major organ damage and as a result spend weeks in the hospital getting treated.

I don’t take chances when it comes to food safety and neither should you.

Can you Eat Cooked Chicken left out for Four Hours?

No, you should not eat chicken left out for four hours. Leaving cooked chicken at room temperature puts it in the ‘danger zone’.

It is safer to eat the chicken within 2 hours otherwise you might get a stomach ache or worse.

Can you Prepare Raw Chicken Left out for Six Hours?

Unfortunately, the chicken is no longer safe.

If the chicken has been left out for more than two hours, the bacteria gets an opportunity to multiply rapidly to the point where the chicken is no longer safe to eat.

You should discard it.

Is Cooked Chicken Okay to Eat if Left Out Overnight?

It is not okay to eat chicken left out overnight. Food tends to be full of dangerous bacteria long before you can actually smell it.

Chicken is no exception. Your chicken may not be okay to eat just because it smells okay. If you leave out chicken at room temperature for more than two hours, especially if the room is warm, it is no longer safe to eat.

It should be discarded.

Can You Re-Cook Chicken that was Left out Overnight?

You should not recook chicken that has been left out overnight.

Recooking might get rid of some of the bacteria that contaminated the chicken overnight but it will most definitely not kill all of them and get rid of all the toxins.

Recooking might get rid of the bacteria but toxic chemicals that are harmful to your health remain present whether or not the bacteria is still in the food.

Chicken is particularly very susceptible to foodborne infection and food poisoning. The rule of thumb with chicken is to discard if it has stayed out for more than two hours or one hour for temperatures above 90 degrees Fahrenheit.

Guacamole can be described as a dip that is made out of avocados, lime, and other fresh ingredients such as cilantro, tomatoes, onions and so much more. As with most things in our kitchens and pantries, guacamole can either be store-bought or homemade. The store-bought alternative will usually come with a best by date, that…

Lovers of hummus know just how important tahini is. Tahini is a paste made from sesame seeds. It has a distinct amazing flavor and has so many uses. A lot of people, like me, use it as an ingredient in hummus. Tahini makes hummus creamier and also enhances its flavor. Hummus always tastes better with…

This is just one of those things that we always have in our kitchen or pantry and nobody remembers ever buying the bottle. And let us just talk about that name, how exactly do you even pronounce it? Anyway, you have the bottle in the house and are worried because you will not be using…

Nothing beats a tasty breakfast that you can prepare in just a few minutes. I don’t know about you, but my family loves pancakes. Therefore, I always have a package of Bisquick in stock so I can quickly whip up some pancakes when we are in the mood for them. Over the years, Bisquick has…

Many people love eating pork because it’s high in protein and it is a versatile meat. It’s also cheap compared to other types of meat. It’s amazing how appetizing the parts of pork can be. However, pork smelling is not a good sign. Fresh pork should not smell. There must be something either in the…