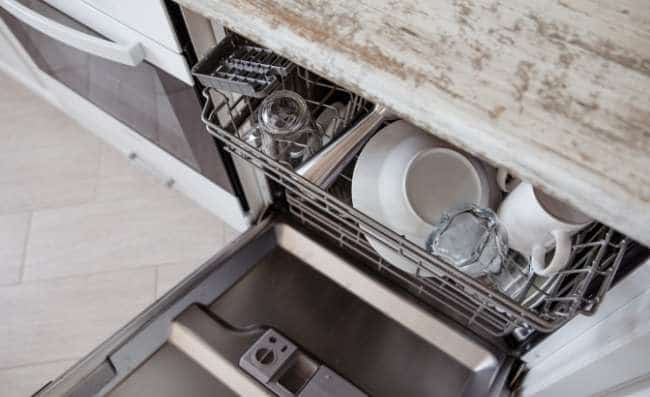 Before you lash out to call a professional, you should try to troubleshoot and see if you can fix the problem. Often, the problem is minute, and you can fix it.

Supposing your kitchen aid dishwasher stops mid-cycle, it might be because it’s old, has a faulty motor, or has a tripped circuit.

To fix it, you can do the following;

Stay with me as I discuss the causes for your Kitchenaid dishwasher stopping mid-cycle and how to fix them. Let’s dive in.

Why is my Kenmore Dishwasher not draining? Click to Read.

There are various reasons why a dishwasher can stop mid-cycle.

It can be a mechanical problem, or maybe it has seen better days. Keep reading to know the reasons in detail.

We will also focus on how to troubleshoot each issue. Keep up.

Also, Check Out The Best Dishwasher Under $700 Reviews. HERE

Check the door latch first if you are busy doing your dishes and the machine stops mid-cycle. The door latch can cause the dishwasher to stop the mid-cycle if;

How to Fix Door Latch Problems

If you are doing your dishes and your KitchenAid dishwasher stops mid-cycle, the first thing to check should be the door latch.

Supposing you realize your latch is intact, the problem is you have overloaded the dishwasher. Unloading some utensils will create space and allow the door to close completely. Your dishwasher will then start a cycle and complete it.

Maybe you have not overloaded your dishwasher. What then?  The problem might lie in the door, the latch, or perhaps you have installed the dishwasher incorrectly.

If your KitchenAid dishwasher stops mid-cycle and you have not overloaded it, do the following.

Like all electrical appliances, a dishwasher has a fuse that limits the power that the dishwasher receives.

A fuse helps to prevent appliances from catching fire. So, if your KitchenAid dishwasher stops mid-cycle and it is not the door or the latch, it might be a tripped fuse.

To be sure it is a tripped fuse, check your other appliances. Supposing they are working, you are sure your dishwasher is the one with a problem.

Check whether the indicator light in your dishwasher is on. Or try to see if the other appliances are functioning correctly.

Supposing they are, it means the fuse has tripped. It is not hard fixing a tripped fuse. Locate the fuse and switch it back on.

A tripped fuse is not a red flag if it has tripped just this once. You should, however, be wary if it keeps on tripping. It might mean that the dishwasher is faulty and needs replacement.

A thermal fuse prevents the dishwasher from overheating. Its work is to sense heat. If the heat is too much, the thermal fuse will blow.

As a result, it will protect critical components of the dishwasher from becoming damaged.

An electrical fuse and a thermal fuse work on the same principle. They sense when there is too much power or heat. They then go off or get blown, causing the dishwasher to stop.

Although a thermal fuse gets blown because of excess heat, other factors can cause it. They are;

How to Fix a Blown Thermal Fuse

If your dishwasher’s thermal fuse is blown, you cannot go around it. You will have to replace it.

It is not a hard job replacing a thermal fuse. If, however you feel like you cannot do it, you should call a professional to assist.

Supposing you are up for the task, follow these steps;

I will not bore you with the technicalities of how a dishwasher works. To put it simply, a dishwasher has a pump that drives water into a motor. The motor rotates, spinning the spraying arms that help clean your dishes.

During a cleaning cycle, you can hear the motor humming. If suddenly the motor stops humming and your KitchenAid dishwasher stops mid-cycle, there is a considerable likelihood that the motor is damaged.

Although the motor can wear out due to the dishwasher being used for a long time, it is mainly caused by clogging. Sometimes, you may tend to use too much when doing your dishes.

Over time, this soap will clog the motor, making it stop. When this happens, your dishwasher will stop its cleaning cycle.

There are times when the dishwasher is not cleaning, but you can still hear the motor hum. When this happens, the motor is not receiving enough power.

How to fix a Damaged Motor

The best way to deal with a damaged motor is to replace it.

Supposing you realize your dishwasher stopped mid-cycle due to the motor, follow the following steps to replace it;

Also, Read on : How Long to Knead Bread dough in the KitchenAid Mixer.

5. A Faulty Control Board

Look at it his way; the control board is like the brain of the dishwasher. Our brains are the ones that ensure that we feed, sleep, learn, and do all the things we are supposed to do to survive.

There are various reasons why the control board can stop working. The main ones are that power is not getting to the dishwasher or short-circuited.

How to Fix a Faulty Control Board

Sometimes the issue is not severe. Maybe it just needs resetting.

Supposing resetting is not the issue; you need to replace it. If you cannot handle the task, it is always wise to look for a professional.

Most electrical appliances have fans. The outlets of these fans are called vents. The work of the fan is to rotate and supply cold air to cool the systems.

If the fan of your dishwasher stops working, the system may overheat. This will cause the thermal fuse to be blown, stopping the dishwasher mid-cycle.

You can fix a faulty fan or vent by replacing it. If you are like me and cannot handle it, get some help.

There are numerous reasons why your KitchenAid dishwasher can stop midcycle. The first step to troubleshooting the dishwasher is knowing what its problem is.

After you have recognized the problem, you can try to fix it. Some of these problems are easy to mend. Some of them are hard, and if you are not talented in that department, you will need professional help.

Now that you know why your dishwasher might stop mid-cycle, you will not be dumbstruck the next time it happens.

Dishwashers are expensive. I will advise you to try and maintain yours as best as possible. Whether buying a new one or replacing some parts, it will cost you. Take care.

We are in an era where cooking has become easier because of all the cooking gadgets on the market today. At times, you become confused about which appliance is best to invest in because there is no way you are going to fit all of them in your kitchen.  There are various ways of preparing…

When it comes to kneading dough with dough hook, you will need to find the best one in the market. Kneading dough with a KitchenAid hook will help you spend little time in the kitchen and get the best baked products. Anyone who kneads bread dough for a long time knows that it’s much more…

Which is the Best Blender For Juicing Fruits and Vegetables? If health and nutrition is your priority, then you know that blending fruits and vegetables is a fantastic way to pack a load of much-needed nutrients in one delicious drink. Not only do smoothies satiate your hunger and stop you from reaching for the dreaded…

Cooking in cast iron comes with a lot of advantages. I love cast iron because its surface is naturally non-stick, it has exceptional heat retention and it also has unbeatable durability. Cast iron is virtually indestructible. Cleaning Cast Iron Utensils made of cast iron usually come with a list of several things you should not…

Whoever invented air fryers deserves the very best in life. We didn’t even know we needed air fryers until they existed. Air fryers make mealtimes a breeze. Honestly, my life has become way easier than when I didn’t have one. Most American households have embraced air fryers. If you love deep fried foods then you…