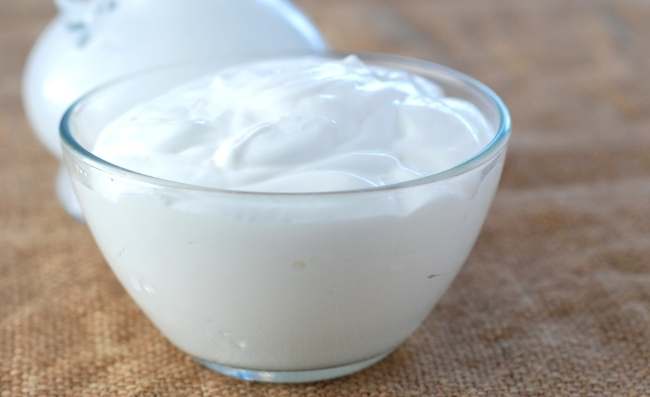 Typically, sour cream is made by allowing the cream that has been taken off the top of milk that has been left to be fermented at moderate or normal temperature.

Similarly, it can also be made through souring pasteurized cream using acid-producing bacteria.

Sour cream is just one of those ingredients that you can find a use for in both sweet and savory recipes as well as a condiment with cooked dishes and a topping for baked goods.

Sour cream can also be relied on as the main ingredient in things like bread and tasty desserts.

The use of sour cream in cooking and more specifically in recipes adds richness, moisture, and even spark to a recipe.

When it comes to how to freeze sour cream, it is advisable to do it using an ice tray. This way, when you want to thaw it, you can thaw only the exact amount needed for your recipe instead of the whole bag.

Ice trays also take up very little space in the freezer which is an added advantage.

If somehow all your ice trays are lost, you can still use a freezer-safe Ziplock bag but be sure to leave room in the bag to allow for the expansion of the sour cream when it freezes.

Can you freeze sour cream? Although not the most recommended method of preservation, freezing sour cream is totally possible.

Though a change in texture is to be expected, frozen sour cream will keep well for up to six months.

How do you revive frozen sour cream?

If you ask around, you will find that most manufacturers advise against freezing sour cream. This is because just like most other dairy products, sour cream tends to separate when it is thawed thus changing its consistency even after whipping it again.

That means that freezing sour cream works only for use cooked and in baked dishes. If, say, you’re making a soup, the changed texture of sour cream won’t affect it that much because you will stir the dairy product in either way.

To thaw or defrost frozen sour cream, simply transfer the amount of sour cream you need to use into the refrigerator and let it thaw for several hours. You will notice that the texture may end up being just a bit watery and the mixture separated.

To fix this, simply use a whisk and whip the sour cream until it gets to reach a smooth consistency. Additionally, you can go a step further and also add a teaspoon of cornstarch and whip it again to reach your desired consistency.

Also, Click to check out; The Best Cream of Tartar Substitute.

Can you microwave sour cream?

While sour cream is for the most part typically thought of as a cold item, I know you have wondered what would happen if you stuck it in the microwave or better yet if you can microwave sour cream at all.

Well, the simple answer is yes. You can definitely microwave sour cream. In addition to this, there are a few tips and important things that need to be considered before and during the microwaving process of sour cream. These include:

What is the shelf life of sour cream?

Similar to plenty of if not all other food products, sour cream comes with an expiration date printed on the packaging.

This is typically how long the store has to sell the sour cream before it starts to deteriorate in quality. Ideally, a closed container of sour cream should last between 7 to 10 days past this date. However, if mishandled the sour cream can go bad even before its best by date.

When it comes to an open can of sour cream, it can remain fresh for a period of up to 2 whole weeks. This is, however, entirely dependent on whether it is stored properly.

Since sour cream is already sour, it will typically usually retain its quality for longer periods of time than other dairy products.

How do you properly store sour cream to prevent it from going bad?

Just like yogurt and ice cream, when it comes to dairy products, sour cream has to be refrigerated. Ideally, you should put it in the fridge as soon after purchasing as possible.

Also, ensure that the temperature in the refrigerator is constant and place them in a section that is preferably not accessed that directly for instance in the vegetable drawers.

Once a can or container of sour cream has been opened, it should be transferred into a container that is resealable and airtight. This should be done especially before placing the sour cream in the refrigerator. The tight sealing is to prevent the drying out of the sour cream and keeping out any strong odors.

It is also beneficial if you use clean spoons to scoop out the sour cream from its container. This prevents the risk of contamination.

How to make sour cream

For this process, you will need just two things really. The first is fresh cream that has a fat content of between 18 and 20 percent and a fermenting agent such as milk, lemon, or even buttermilk and yogurt in some cases.

Once the cream is ready, you can choose whichever flavor you like and add to it.

If your sour cream turns out a bit thinner and runnier in consistency than usual, do not worry about that. It is simply because the store-bought cans of sour cream usually have thickener added to them during their manufacturing.

You can also choose to make your sour cream more instantly if you are swamped for time, simply add lemon into heavy cream and whisk until the cream is slightly stiffened.

Going the way of making your own sour cream at home is beneficial in that it is easy to make, versatile to use, and inexpensive to acquire.

Signs of spoilage in sour cream

Because sour cream can and does go bad, there are a few things to look out for to keep you from eating or consuming bad sour cream. These signs include:

Sake is a Japanese wine that is commonly known as nihonshu. Manufacturers make it using fermented rice.  In Japan, sake is a popular ingredient in most households. Most people serve it on special occasions. Sake has also gained popularity in the United States and is available in most restaurant menus. Sake is quite versatile. You can drink…

Can You Freeze Ricotta Cheese? If you’re like me, you purchase fresh food in large quantities that you may not use up all at once. So, you’re always searching for safe, hygienic, and creative ways to store and lengthen the shelf life of your foods. One of the questions most asked is can you freeze…

Apples are popular fruits in the United States, so it is no surprise that most people love apple juice. Apples contain natural sugar and are low in calories. They are super nutritious and have numerous health benefits.  You can buy apple juice at a local store near you or make your own at home. If…

Milk is one of those items that is ever-present in the kitchen. You can consume it as it is or use it as an ingredient. It is such a versatile ingredient. You can use it in your pancakes, desserts, salads, or even dishes like pasta. Milk is a dairy product. It is produced by mammals…

All fruits go bad, and avocados are no exception. I am a great avocado lover, and so are my family members. It is very easy to tell when other fruits like mangos, bananas, or apples go bad. Avocados on the other hand are a bit complicated. You can’t tell whether or not they have really…