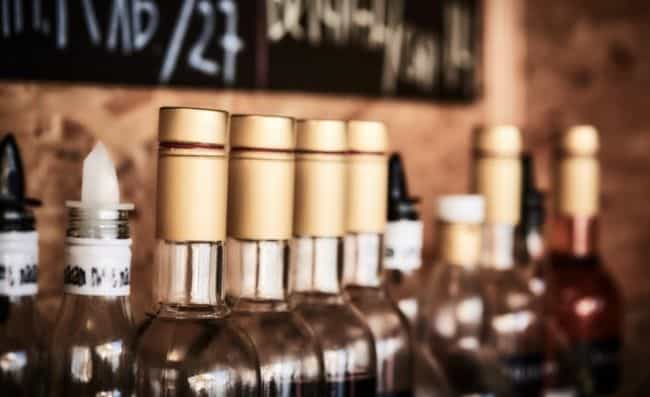 Falernum is a Caribbean sweet rum liqueur. It is flavored with several ingredients, including limes, ginger, almond, and other spices.

Most people use this sweet rum liqueur to flavor tropical cocktails, but since it is not readily available, you need to know falernum substitutes you can use in its place.

Despite being a liqueur, falernum is commonly described as syrup because you can use it to flavor drinks without adding any alcohol content.

You may need to substitute falernum with something else for various reasons. Maybe the liqueur stores close to you don’t stock them, or you want to experiment with a different flavor.

Whatever the reason, you are in luck because there are several possible substitutes.

In this article, we will look at these substitutes in detail and discuss their possible applications, but before that, let’s educate ourselves about falernum to know how best to substitute it.

As mentioned above, falernum is a sweet rum liqueur. It has a rich flavor and a thick consistency.

When you add falernum to a cocktail, it spices it up and also brightens the sour notes.

You only need to use a little bit of falernum in your cocktails to achieve good results.

The origin of falernum can be traced back to the 1700s. Sources claim that Henry Parkinson invented the drink in 1750. Arthur Stansfeld, Parkison’s great-great-grandson, registered it and introduced it to the United States in 1934.

Falernum has gained popularity over the years. Most mixologists include it in their cocktail recipes to give the cocktails unique flavors.

There are two main varieties of falernum in the market; alcoholic falernum and non-alcoholic falernum. I have also come across a few manufacturers that produce gluten-free falernum, so if you have any dietary preferences, you can use it instead of the regular falernum.

Before substituting falernum with another ingredient, you need to know its ingredients. Manufacturers make falernum by flavoring sweet rum with allspice, ginger, lime, bitter almond, vanilla, and cloves.

Falernum is a great addition to tropical cocktails. Most people also add it to mai tais and zombies. Although falernum is mostly added to cocktails, you can enjoy it on its own over ice.

Falernum is an amazing ingredient, but it is not readily available. In case you come across a recipe requiring you to use falernum, you may have to use a substitute in its place.

Here are a few options for you.

Orgeat is a good falernum substitute that is milky golden in color. Note that this is a non-alcoholic option, so if you want some alcohol content, you can add a little bit of brandy to it.

There are several orgeat flavors available, including orange flower, almond, and barley. You can add orgeat to both tropical drinks and cocktails.

I recommend using French Garnier orgeat as an alternative to falernum. Its flavor is very similar to that of falernum, and it works well in most recipes.

Depending on your preference, you can use the pistachio, almond, mango, or banana flavored French Garnier orgeat. This substitute is readily available in the United States.

Just like orgeat, grenadine is a non-alcoholic ingredient you can use in place of falernum. It is a popular bar syrup that is readily available.

In terms of flavor, grenadine is sweet and tart. It also had a bright red color, making it the go-to substitute in cocktails since it gives them a pink or reddish color and a fine flavor.

You can use grenadine in both cocktails and non-alcoholic drinks. You can also enjoy it on its own over ice. It makes for a refreshing drink.

If you love fruity flavors, you should use fassionola as a falernum substitute. Fassionola is a syrup that is popularly used in tropical drinks.

There are different fassionola varieties in the market. The varieties have different colors, including green and gold, and the flavors also vary slightly.

I highly recommend using fassionola in hurricane cocktails, but you can also use it in other cocktail recipes that call for falernum.

Horchata is a plant milk beverage. Its color and flavor are similar to that of falernum.

You can substitute falernum with horchata in both cold and hot drinks. Add it to ice cream, rumchata, and cookies to enhance their flavor.

There are different varieties of maple syrup you can choose from, including the Canadian and American versions.

Most people use maple syrup on pancakes, waffles, French toast, oatmeal, and porridge. It is also used to sweeten your baked goods.

You can add maple syrup to cocktail recipes that require you to use falernum.

Pog is a tropical juice drink that is made from orange, guava, and passion fruit.

The three flavors complement each other perfectly.

There are different Pog varieties available in the market. You can cause it as an alternative to falernum in cocktail recipes.

If you need a falernum substitute and have some time on your hands, you can make your own at home by following a simple recipe.

The ingredients you need are readily available and relatively cheap.

You will also need a few tools; a mason style bottle or jar, funnel, cheesecloth, and a medium-sized bowl.

If you do not have falernum in stock, you can use any of the substitutes above in its place.

My favorite substitutes are orgeat, grenadine, and fassionola. If you have time, you can make homemade falernum.

When using the substitutes, begin with small quantities, then adjust to your liking by adding more bit by bit.

Try using any of the substitutes we have discussed above, and let me know how your recipes turn out.

Potatoes being one of the most common vegetables globally have a ton of health benefits. And it is also the most celebrated since everyone loves French fries. If you decide to buy potatoes from the grocery store but you store them in your pantry for far too long you just aren’t sure if they are…

I’m sure you are wondering, what is this talk about salt going bad, right? I mean, after millions of years in seawater (for sea salt) and even perhaps in rock form (for Himalayan rock salt), what is the fuss over a couple of weeks, months, or even years of it being in the pantry? Does…

Tomatoes are a common ingredient. They are used to make several tomato products that are a great addition to dishes. First things first, what is tomato puree? Tomato puree is a thick sauce that is made from briefly cooked tomatoes whose skins and seeds have been strained. The only additive in tomato puree is salt…

I am a huge fan of syrup. I use it when eating pancakes, waffles, and bread, and when I am feeling motivated, I drizzle some on my French fries. Before you come for me, that is the beauty of life. You can eat anything with anything, as long as your body is not complaining. I…

The use or discovery of chili, which is the key ingredient in hot sauce, can be traced way back a whopping 7000 years. The first findings of chili were discovered by archeologists in Peru. As for their spread to other parts of the world, it is believed that birds played a key role by carrying…