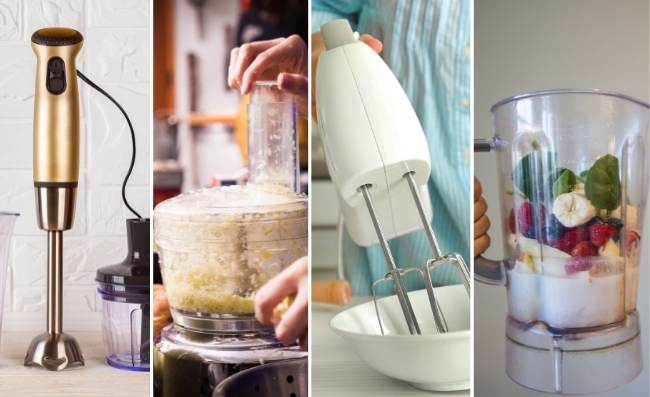 An immersion blender, in simple terms, is a stick that has blender blades at one end. Many cooks use this blender to mix soups, smoothies, or any other mixture that they want blended.

If you are a committed cook, you have had an immersion blender in your kitchen at one point or the other.

It comes in handy when you want to mix some ingredients and do not want to use the regular blender for various reasons.

I mostly use an immersion blender when dealing with large amounts of mixtures. For example, when preparing food for a large group of guests, I will use this blender to puree a large bowl of soup.

The advantage of using an immersion blender with large mixtures is that you avoid the hustle of blending many times using the regular blender. What do I mean?

The regular blender does not hold a large capacity for ingredients. So, if you want to blend a large amount of a particular mixture, you will have to do it bit by bit. This will be both tiring and time-wasting.

Sometimes, despite how much we want to use an immersion blender, it won’t work because it is either spoilt or you misplaced it. What then do you use in its place?

Immersion blender substitutes are; the blender, a hand mixer, an electric whisk, the potato masher, a chopper bowl, the stand mixer, and a food processor.

Also: Check Out How to use a hand (Immersion) blender for chopping. HERE

The Immersion Blender and its Uses

I have covered a little bit of what an immersion blender is and what it does above. Let us now see some of the primary uses and importance of having it in your kitchen.

This blender is simple to use and clean. To start using it, plug the electric cord into a socket that works. Put the end that has the blender blades in whatever you are blending and ensure that the blends are completely submerged.

Start the blending process by switching the immersion blender on and then holding it in place to blend.

After a while, move the blender around whatever you are mixing to ensure that the mixture is blended uniformly.

This blender is powerful and blends all food substances, including meat. Some ways that you can use this gadget are;

● Puree some potatoes or pasta

● Blend some fruits and vegetables

● Smooth soups and sauces when cooking

Also, Check Out: The Best Blender For Juicing Fruits and Vegetables: A List of the Top 7

These substitutes will work best for different purposes.

Ensure that you pay close attention to what every gadget in this list is best known for. This way, you will get the best results. Let us get to it.

The only downside to using the regular stand blender is that you must blend several times if you are dealing with a large mixture.

I have started with this blender because it is the most common on this list. Almost every household has one. You have a blender if you love smoothies or some natural juice.

You use the stand blender to puree your soup, make a smoothie, chop some fruits, or even smooth sauces. Some stand blenders are strong enough to blend some tough substances like meat.

So, if you want to puree your soup and you cannot seem to locate your immersion blender, use your stand blender. It will serve the purpose.

Another downside to using the stand blender is that it is not as simple to clean as the immersion. Also, the chances of it failing after blending coarse substances are high.

So, I advise you to use this blender to blend soft substances. Again, it is best to use this stand blender when you want to mix less material. You will waste a lot of time if you have many ingredients you need to blend.

Do not confuse a hand mixer with a hand blender. A hand blender is another name for an immersion blender, and some people confuse the two.

There is a clear difference in the physical appearance of the two, although they have similar roles.

A hand mixer is a kitchen appliance with a plastic board and two beaters that look like egg whiskers. It is electronic and uses a rotating mechanism to move the whiskers.

Do not confuse the hand mixer with a stand mixer, for there is a difference. A hand mixer does not have a stand where you put a bowl to blend the ingredients.

Instead, it has a handle. You hold the handle and put the two whiskers inside the ingredients you want to blend.

A hand mixer is the best alternative to the immersion blender. You blend the ingredients in the same bowl they are in when using either appliance.

Another great reason a hand mixer is an excellent substitute for an immersion blender is that it can blend large amounts of ingredients. Using a hand mixer, you do not have to puree your soup in small portions.

Food processors have been in the market for some time now. A food processor makes an excellent alternative to an immersion blender because they do the same tasks. That is, puree, shred, chop, blend, and make smoothies, among others.

A food processor is a bowl mounted to a motor with a feed tube. This bowl has a lid that is made of the same transparent material. The feed tube is what you use to put food substances into the food processor.

This culinary appliance is suitable for chopping, shredding, and grinding harsh food substances like meat. On the other hand, you can also use it to blend soft ingredients like fruits to make some juice or a smoothie.

Food processors come in different sizes. Some advanced brands, however, sell a single blender with different bowl sizes. This way, you use the bowl size that suits your needs.

Supposing you have a food processor in your kitchen, use it in an immersion blender if you do not have it.

Although some folks cannot differentiate a stand mixer from a hand mixer, there is a noticeable difference.

The difference is that a stand mixer has a stand where you put the bowl with whatever you want to mix. On the other hand, a hand mixer has a handle that you hold while you blend your mixture.

A stand mixer is also perfect when shredding, chipping, grinding, or cutting coarse substances. It is built to do such heavy duties and will not stop working because of it.

Like an immersion blender, the stand whisker mixes your food substances in the same bowl, so transference is unnecessary. So, even if you mix a large portion of food substances, you will just do it once.

When looking for an alternative to something, we frequently want the option to have a similar look and function to what we are replacing. If that is the case for you, an electric whisker is a perfect substitute.

An electric whisker and an immersion blender look the same. The only difference is that the whisker has whisks while the blender has blades at the end.

Other than that, they look the same, operate the same, and you can use them for the same functions.

An immersion blender and an electric whisk can be sold as the same appliance. Some appliance manufacturers make the same gadget and sell different attachments to accompany it.

So, you can get one with whisks, blender blades, or beaters.

If you buy such a whisk with other attachments, you can use it to perform all the tasks that an immersion blender can.

As the name suggests, a chopper bowl is a large bowl that cuts or chops food by rotating it around some chopping blades.

The chopping blades are inside the bowl, and you turn the blades manually. The working of this kitchen appliance resembles that of a food processor in a way.

A chopping bowl is the most likely list appliance to use in this list. In desperate times, however, you can use it.

One thing that an immersion blender can do is mash potatoes. When you have cooked your potatoes, you can put this blender in them. It will cut through them, and the result will be some mashed potatoes.

A potato masher does the same thing, though, differently. People use it to mash potatoes or other food substances like cooked yams.

If you wanted to use an immersion blender to accomplish such a task as mashing, you could easily replace it with a potato masher.

A significant advantage of using this kitchen appliance is that it is manual. With or without electricity, you can use it to accomplish your task.

Also, Click to Read On: The Best Portable Blender for Travel.

Blenders are essential appliances in the culinary world nowadays. Cooks use them to accomplish different tasks that make cooking more accessible and enjoyable.

An immersion blender is one type of blender that is common in the kitchen. People use it to do different tasks like chop, grind, blend, and puree.

It is, therefore, somewhat devastating if you misplace yours or can’t seem to find it.

There is no need to panic, though, because after going through this article, you now know what you can use to accomplish the same tasks if you do not have an immersion blender.

It is always my pleasure to make cooking effortless and more enjoyable for you. So, try these appliances and continue cooking delicious meals.

Most people use white pepper to spice up various dishes, including cream past, white soups, and dips.  It is a preferred condiment because it doesn’t alter the color of the dish you are making. White pepper is an excellent addition to dishes, but what if you run out yet are using a recipe that calls…