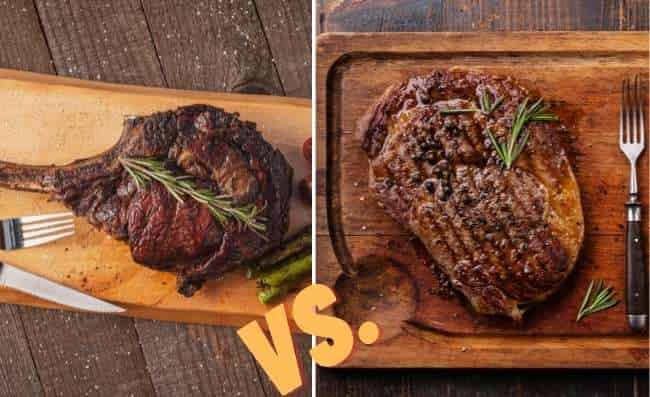 The conversation surrounding boneless and bone-in steaks can be endless, with everyone defending their love for one over the other. The primary and most noticeable difference between these two is that one has a bone while the other does not.

Fort worth ribeye and bone-in ribeye are cuts that butchers cut from the shoulder part of the cow.

They are also some of the most delicious cuts you can come across. This fact can be hugely attributed to the fact that they have some fat layers that add flavor.

This article will cover some of the similarities between the two cuts and help you reach a verdict. Which is better, fort worth ribeye or bone-in ribeye? Let’s dive in.

Are the Two Steaks That Different?

As mentioned above, the main difference between fort worth ribeye and bone-in ribeye is the bone. Otherwise, the ribeyes are taken out from the same part of the cow.

You might be wondering then why this is a worthwhile discussion. For most meat enthusiasts like my dad, you have to call it what it is to avoid confusion. Some restaurants might refer to these cuts as simply ribeye steaks.

Supposing you went to such a restaurant looking for a boneless ribeye, and you are served with the bone-in steak. You would not be happy. It is, therefore, crucial to call them for what they are to avoid confusion and frustrations.

Looking for the Best Gas Grill Under $150? Click to Here.

Despite the two steaks having similarities, various things set them apart.

We have already established their main difference, and therefore we will now cover the other things that set them apart.

Here are the main differences between fort worth ribeye and bone-in ribeye.

Mostly, people prefer cooking fort worth ribeye by baking and bone-in by smoking. Bone-in ribeye does not cook well under high temperatures.

It takes a long time to cook thoroughly, and high temperatures will drain all the moisture from the steak leaving it dry. It is therefore ideal for cooking it under low temperature. As such, smoking is the best method of cooking it.

On the other hand, fort worth ribeye cooks fast. High temperatures will not affect it, and therefore you can grill or bake it.

The boneless steak will allow heat to penetrate faster through the meat and evenly.

The bone in the bone-in steak is an insulator of some sort. Therefore, the flesh surrounding the bone will take longer to cook.

Even when cooking the bone-in ribeye, the meat will cook unevenly. The logic behind this is, the meat nearest to the bone will take longer to cook. All the while, the flesh furthest from the bone will have cooked and become tender already.

Since you will give the steak more time to cook, the nearest meat to the bone might be undercooked, or the meat furthest from the bone might overcook.

For the fort worth ribeye, the entire meat chunk will cook evenly.

Why Are Short Ribs So Expensive? Click to Read

When I say texture, I mean the feel of cooked ribeye. This is because both ribeyes feel the same to the hand when raw. After cooking them, the texture changes.

Generally, bone-in ribeye is more chewer than forth worth ribeye. This fact results from the thickness of the muscles in each steak. What do I mean by this?

The boneless stick has thinner muscles as compared to bone-in steak. Due to that, it cooks evenly and better than the bone-in steak. It is, therefore, less chewer and tough.

The bone-in steak has thick muscles due to the bone. It cooks unevenly and longer than the fort worth ribeye. It is, therefore, tougher and chewer than the boneless steak.

In case you are looking for a soft and evenly cooked ribeye, fort worth ribeye will be your choice. It is juicy, and you won’t experience any tough parts.

It is also good to feed a kid who does not have the strength to chew for long.

Some people prefer the chewiness of the bone-in ribeye. As my dad puts it, it makes you feel the experience of eating meat.

Whatever texture you are comfortable with, the important part is enjoying the ribeye.

As I have already mentioned, both ribeyes taste the same. Some people think that the bone in the bone-in ribeye changes its taste.

Some meat lovers will disagree with me. They will swear that the bone marrow changes the taste of the bone-in ribeye. I do not see this as the case, especially considering I have eaten both ribeyes.

The main difference in taste between these two ribeyes is experienced after seasoning. The boneless steak has a considerable surface exposed for the seasoning. As a result, the seasoning is uniform and covers every inch of the steak.

On the other hand, the bone-in steak has a small surface exposed due to the bone. In the end, the seasoning is uneven, affecting the taste of this steak.

The shapes of fort worth ribeye and bone-in eye are different. The latter takes the shape of the bone, while the former will have an even form.

Tabular Representation of the Differences

This article aims to help you decide which ribeye is better. Is it fort worth, or is it bone-in? The ribeye is generally the same meat cut from a cow’s shoulder. They taste the same to some people while others say they do not.

As we have seen, the main difference is the presence of a bone or not. Fort wort ribeye is boneless, and the bone-in ribeye has a bone.

Other than that, we have covered some of the significant differences. After reading through those differences, I hope you have decided which is better for you. That is not a decision I can make for you.

Supposing you decide you love them both, it is also allowed. When all is said, you alone know what you want.

As an avid eater who always wants to try new wines with my meals, I can confidently say I wouldn’t substitute Sherry for other drinks at my table. With its many variables, Sherry is my favorite startup wine. However, can Sherry go bad? Yes, I believe it does since it’s packaged for consumption. It has…

In this article, we shall be talking about this not so commonly used yet wonderful and nifty tofu. If we are being honest, tofu really neither looks nor tastes good when it is removed from its packaging. A common answer to the question on the taste of tofu is that it is quite literally tasteless…

Achieving the perfect cookie dough consistency can be tricky, even for the most experienced bakers. You may have wanted to bake fresh cookies for your family only to notice that you used too much flour and the dough consistency is tough and crumbly instead of pliable and soft. No one likes dry cookies, and baking…