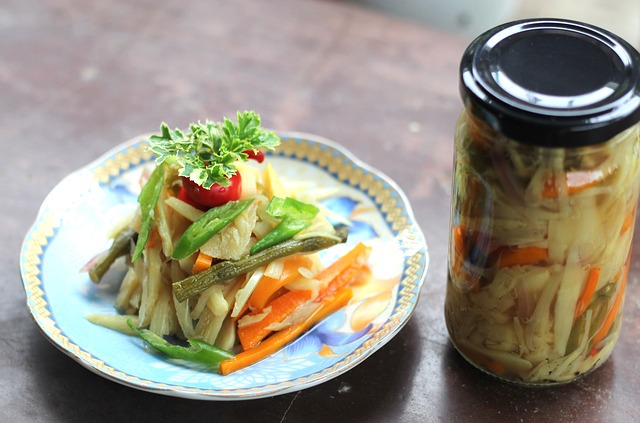 Bamboo shoots, a predominantly Southeast Asian and East Asian delicacy, are edible shoots of the bamboo plant.
They are cone-shaped, cream-colored, and are about 15 cm long. These young, tender shoots are popular in countries like China, Taiwan, Japan, and Northern India.
Fresh bamboo shoots are usually a seasonal delicacy, generally in early spring and summer.
The bamboo tree is native to China and has many variations and regional adaptations.
The hearts of these bamboo trees which are the bamboo shoots are usually harvested in early spring or during summer.
This dish is highly sought after and has been prepared for thousands of years. It is due to its sweet taste and crunchy texture. We will find out how to cook bamboo shoots in this post.

Bamboo was first introduced into the United States in the 19th century
They are considered one of the most useful and healthy foods because of their rich content of proteins, vitamins, carbohydrates, fiber, and shallow-fat content.

They are one of the vegetables with the lowest calories.
Bamboo shoots are rich in vitamin B complex groups such as thiamin, niacin, riboflavin, and vitamin B-6, which are essential for optimum cellular and metabolic functions.

They also contain minerals such as copper and manganese;

This food has many anti-inflammatory properties, keeping cholesterol on the check and strengthens your immune system.
Bamboo shoots are highly used in Chinese medicine due to their detoxifying properties.
Preparation of fresh bamboo.
At home, you should prepare fresh bamboo shoots as soon as you harvest to maintain its flavor. Raw bamboo shoots need further processing before they use in cooking.

One of the easiest methods of peeling bamboo shoots is to cut it lengthwise into halves and then peel the outer leaves from the base towards the tip.

Click Here to View The Top 7 Best Knives For Your Kitchen.

You can then proceed to dice your stalks into desired sizes while dipping the cubes into cold water to keep them from turning brown.

You should treat the cubes in boiling water to detoxify.
Tip: (Boiling in uncovered salted water for twenty to twenty-five minutes is the best way to remove any toxins.)

Bamboo shoots contain a compound known as taxiphyllin, a cyanogenic glycoside that you should remove before cooking.
This is effectively done by boiling.

You can purchase your bamboo shoots in three forms; either fresh, dried or canned.

Check the ones that are firm and have heavy sprouts, preferably having a broader base.
If possible, avoid shoots that have dry roots. A good indicator is to check the base of the root, whether it is turning greenish or not.

Greenish coloration can be an indication of too much exposure to sunlight and can be very bitter.
Fresh bamboo shoots have a unique and sweetest taste of all the forms.

The canned bamboo shoots are usually cut into flat, uniform, and long strips.

You can choose to purchase the larger cans of shoot strips, which you can cut and size into the shape you want. There are also frozen packaged bamboo shoots. You can find bamboo shoots in many international stores, and you can ship then on online retail stores. (Though it will be very costly.)

There are also dried bamboo shoots, which are more useful for international shipping and off-seasons. For these, you would need to soak them for several hours before you use them.

The purpose of doing this is to rehydrate them. The flavor and texture of these dried shoots, however, are not the same as that of the fresh bamboo shoots.

Where to Buy Bamboo Shoots.

You can mostly find bamboo shoots at your local Asian market or Chinatown. Many mainstream stores and supermarkets are also stocking bamboo shoots.

However, be careful not to buy dried bamboo fungus, which, although it is edible, is not a substitute for bamboo shoots.

The main difference between the two is the appearance; the fungus is whiter in color and appears more like a lacy coral.

How to cook bamboo shoots.

Bamboo shoots have a crunchy feel, crisp texture, and mild flavor. They are widely used in many dishes across Asia.

There are many ways of preparing bamboo shoots. It is important to note, however, that they are only edible after boiling.

It is also possible to make soups, salads, and noodles as they do in China for instance. Bamboo shoots are great for adding texture to everyday dishes and are very versatile.

One widely standard recipe for preparing bamboo shoots is the bamboo shoot stir-fry.
For this recipe, you will need;

Method to follow.
To make the bamboo shoot fry, heat an iron skillet on medium heat.

Another interesting vegetarian recipe made with bamboo shoots is the Buddha’s delight.
It is a delightful dish usually savored during the Chinese New Year.

There are 18 different ingredients in the original Buddha’s delight to represent the various apostles.

For this recipe, you will need;

It is important to note that there are many different variations to this recipe, owing in part, due to the difficulty of accessing some ingredients.

How to store bamboo shoots.

It is advisable to eat bamboo shoots as soon as you harvest them, to enjoy their unique taste and flavor as well as prevent the sprouts from becoming bitter.

When you have extra bamboo shoots, keep them unpeeled and wrapped in a paper towel, then store them in the fridge where they can stay fresh for a few days.

You can also store fresh bamboo shoots in a bag, then place in the refrigerator where they can last for several days.

Alternatively, to store any leftover bamboo shoots, as well as blanched or boiled fresh bamboo shoots, you can place them in a plastic container and cover with fresh water.

Seal this well and store it in the refrigerator for a few days.

It is possible to bamboo shoots in the freezer for up to six months before use.

You are at the store and are on the search for the perfect brand of pudding to buy that you can eat without fear of having to deal with an upset stomach afterward. You have scoured the store and you now have two options in your hands. Well, technically speaking, the pudding in your hands…

There’s nothing better than scrambled eggs served alongside bacon and toast in the morning. In most American households, scrambled eggs are the go-to breakfast option. They are easy to make, and you can whip them up in just a few minutes. You may be disappointed when you make scrambled eggs only for them to turn…