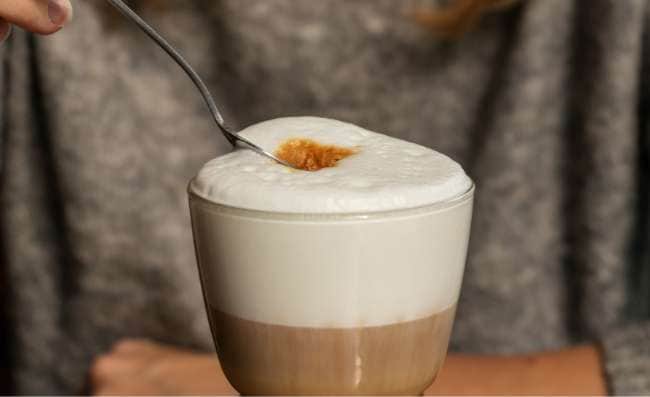 Milk foam; also called cheese foam, milk cap, milk mustache, or cheese cap is used to make boba tea. Taiwan is credited with being the birthplace of the popular beverage known as Bubble Tea with Milk Foam, which can be found in East China and most Asian countries.

The tea is quite famous in the United States. A milk or bubble tea base is used in the preparation of cheese tea, which is then topped with “cheese foam.” Cream cheese is used to make cheese foam. Cheese foam can be found at many tea shops around the world under these names.

You may make cheese foam by beating cream cheese with heavy whipping cream, milk, sugar, and salt until it becomes foamy.

Once it has reached the desired consistency, cheese foam can be used as a topping for different types of bubble tea and other popular drinks such as milk teas and iced tea.

It has a rich flavor that is comparable to cheesecake, and when combined with tea, it turns creamy and lends a faint tang to the drink while still allowing the other flavors to shine through.

Cheese foam is not designed to be consumed on its own; rather, it is intended to be used as a creamy foam in a beverage such as a boba drink of the flavorful bubble tea drinks.

Milk foam is used when making almost of kinds of milk tea or hot drinks, except for teas such as black tea, fruit tea, and oolong tea, which don’t require milk. You can use it on any of your favorite beverages.

Why this recipe works

The cream cheese foam is created by combining cream cheese, milk, and whipped cream into a single combination known as a cheese mousse.

This foam has a flavor that is comparable to that of a milkshake or a cheesecake with a foamy topping.

This foam does not only have a flavor that is rather appetizing, but it also has a visual appearance that is fairly appealing.

What Is The Flavor And Taste Of Cheese Foam?

The cheesy foam has a flavor and taste that can only be described as delicious, and they go hand in hand.

It has a flavor that is comparable to milkshakes that taste like cheesecake. Matcha green tea, bubble tea, red bean milk tea, or coffee are the beverages most commonly made in boba shops that use a cheesy foam topping.

Regarding consistency, the cheesy foam is smooth, velvety, and foamy all at the same time. You have the option of leaving the cheesy foam floating on top of your base drink or any type of tea.

Because of its name, it is reasonable to think that the cheesy foam will be packed with flavors that are reminiscent of cheese.

On the other hand, it has a trace of a savory mixture and a hint of sweetness. During the process of creating the cheesy foam, a pinch of salt is sprinkled on top to give it a savory bite.

Cream Cheese- In order to achieve superior results, cream cheese is typically folded into whipped cream. The cheese foam gets a flavor that is slightly sweet and sour with the addition of this ingredient. Use one-half cup of room-temperature cream cheese in the recipe.

Whipping Cream: Whipped cream is used to make a rich, foamy topping for cakes, pies, or drinks. Coconut milk or a blend of soy milk and olive oil are two viable alternatives to consider if you do not have access to the original ingredient.

Sugar – It is imperative to include sugar in the process of preparing the cheese foam. The viscosity of fluids is increased as a result. Be sure to use regular sugar and not powdered sugar in the recipe. The cheese froth will have a more manageable consistency if you use granulated sugar.

Salt: To suit your taste, sprinkle a little bit of sea salt.

Stand Mixer – Use a stand mixer to give the whipping cream a lovely and fluffy texture by beating it.

Bowl – Whisk the sugar, milk, and cream cheese together in the bowl provided.

Whisk – Use a whisk to combine all of the ingredients in an even manner.

Coffee Cup -The drink should be served in a glass mug topped with a layer of creamy cheese foam.

Also, check out: The Best Tea Kettle for Gas Stove Reviews-Essential for your Tea experience.

Well, considering that it is referred to as “cheese” foam, replacing the cream cheese with anything else will not really give you the intended outcome.

In any case, if you need to brew cheese foam tea but do not have any cream cheese, you may substitute sour cream for the cream cheese and still achieve the desired results.

However, in order to achieve a consistency that is slightly more substantial after it has been combined with other ingredients, we advise whipping the sour cream first. Additionally, because sour cream is more liquid than cream cheese, you need to be careful about the amount of milk or water that you add to the mixture.

The finished “sour cream foam” will have a thinner consistency than cheese foam, which will make it easier to incorporate into the tea once it has been made.

Due to the fact that it has a lower fat content than the original cheese foam, it will not be as rich either.

Because sour cream has a flavor profile that is noticeably different from that of cream cheese, it is important to keep in mind the amount of sugar needs to be adjusted in order to maintain a harmonious taste; otherwise, you run the risk of your tea becoming bitter.

You can keep it in the freezer for up to two months if you seal it well.

Cheese foam can be made ahead of time and then used later in its creamy milk foam. Make a big batch and store it in the fridge in a container that keeps air out.

It can last for as long as five days. But it will taste best when it is new.

Is there a vegan alternative to cheese tea?

Are There Different Kinds of Milk Tea?

Yes! There is a wide variety. Boba milk tea, Earl Grey Milk Tea, Hong Kong Milk Tea, Taro Milk Tea, Brown Sugar Milk Tea, and many more can all be distinguished from one another by the type of tea used.

Can I Use Sour Cream To Make a Cheese Cap?

You could, but the flavor would be affected. For the best results, whip up some cream cheese with some heavy cream and some milk.

Use Appropriate Equipment – The preparation of the cheese froth to the required consistency is a labor-intensive operation. Utilizing the appropriate tools and gear is the most efficient approach to getting the job done correctly.

You can make the process simpler and more efficient by using a stand mixer. The ideal choice will be a stand mixer that also comes with a portable attachment.

Be careful not to overwhip the whipped cream; instead, stop whipping when soft peaks begin to form so that the consistency of the foam is not altered. The cheese foam that you make shouldn’t be the least bit runny in terms of its consistency.

Do not overmix- Both over-whisking and over-mixing are harmful practices. Continue reading the recipe in order to determine the ideal density of the cheese foam at each successive stage.

I am a great lover of pancakes. They are a must-have for me and my family over the weekends. It has become some sort of tradition for us. I like my pancakes fluffy and moist on the inside with lots of my favorite syrup which is chocolate syrup. There is something about having pancakes for…

A colorful, attractive fun no bake rainbow rice krispie treats recipe is suitable for home-making club activities for children. It is an excellent addition to the list of snacks at a kid’s birthday party or any occasion.  About the recipe  My eldest daughter had just joined regular school and was excited to join the homemakers…

We all aspire to live a healthy lifestyle but life can make one so busy. The thought of cooking all your meals every day often feels impossible considering all the work you have to do and this is where meal prep comes in. Meal prepping is a must if you go to work, school or…

Incorporating vegetables into my diet takes daily effort. This meal prep recipe is one way to ensure I eat my vegetables. How to eat the salad This specific salad is best eaten cold since warming it would make the spinach wilt but if you prefer it warm then you can go ahead and warm it….

What’s better than the smell of freshly baked Danish? I really can’t think of any other dessert that makes my whole family (no exaggeration here), wait anxiously for the treats to cool down so they can have a taste. They love it, and so do I. There is absolutely no way we can all have…