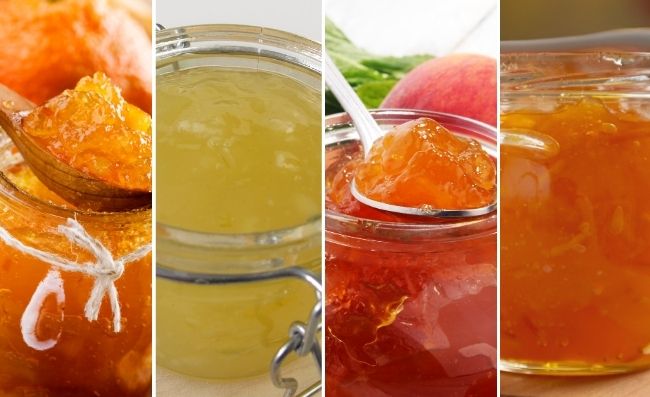 If you are into preserves, I can bet you have interacted with orange marmalade in one way or another. Orange marmalade is a versatile citrusy preserve that is used in both savory and sweet dishes.

It pairs perfectly with everyday meals and snacks. I love orange marmalade because I use it in several dishes including baked goods, salads, vegetables, and meat. I stock it but I also tend to run out of it very fast.

I would describe the flavor of orange marmalade as slightly sweet and citrusy with a distinctly bitter flavor. The bitter flavor is actually what distinguishes it from a jam.

We have all been there, a recipe requires you to use orange marmalade and you realize you ran out. This is where the substitutes come in.

Substituting orange marmalade is actually quite easy. You can use jam, jellies, juices, preserves, citrus zest, or even chutney.

Orange jam and jelly are suitable orange marmalade substitutes. Manufacturers basically use the same process to make jam and marmalade.

The only major difference is that orange jam does not have the bitter flavor that orange marmalade does. Therefore, it may not give you the same results.

I suggest using orange jam on toast, desserts, and pudding. You can also use them as a glaze and as a spread on brownies.

There are several brands of orange jam and jelly in the market and most supermarkets stock them. In case the one close to you doesn’t, just buy it online.

Orange juice is one of my favorite orange marmalade substitutes because it is readily available. Chances are that you have it in your refrigerator right now as you are reading this article.

There are two main varieties of orange juice in the market. The sugar-free one and the one that contains sugar.

If the one you have is sugar free, you will have to add a little bit of sugar to your recipe to get a flavor similar to that of orange marmalade.

I suggest using this substitute in sauces, marinades, and salad dressings.

You can use lemon marmalade or any other citrus marmalade in recipes that call for orange marmalade.

You can replace orange marmalade with lemon marmalade in equal amounts. All you need to do is make sure that the lemon flavor complements that of other ingredients.

Lemon marmalade may overpower some dishes, so add it little by little to your dish until you get the flavor you want.

Fresh or dried orange zest can come in handy when you do not have any orange marmalade on hand.

Both fresh zest and dried zest work well as substitutes. I suggest using this substitute in baked goods as well as desserts.

Do not use too much zest as your dishes will turn out to be too bitter. Use it sparingly and add sugar to the dish to balance out the bitter flavor

Apricot is another amazing substitute for orange marmalade. Apricot jam and orange marmalade have similar flavor profiles. Their texture is also the same. Therefore, you can use them interchangeably.

If you want the flavor of the jam to give you the same results that orange marmalade does, add a dash of lemon to your dish. The results will be perfect.

I highly recommend using the apricot jam as a substitute for baked goods and spicy dishes. The jam complements these two dishes perfectly.

Mango chutney can be used in several recipes that call for orange marmalade. You can buy it from the supermarket or make it at home. It is quite easy to make and you will need very basic ingredients.

To make your own mango chutney at home, cook mangoes, mustard, onions, ginger, and white vinegar on low heat until the mangoes become soft.

I suggest using this substitute in savory dishes. Use it as a coating for roast meat or use it to flavor your curries.

It is important to note that fig jam may have a much sweeter flavor compared to orange marmalade depending on the age of figs used to make the jam.

Therefore, it lacks the distinct bitter flavor that orange marmalade has.

I suggest using this substitute in baked goods and desserts because of its sweet flavor. You can also use it as a marinade as well as a spread on toast and brownies.

Simply cook peaches, brown sugar, ginger, and apple cider vinegar on low heat until the peaches become soft. Use the ginger sparingly because most people do not like the flavor or find it too strong.

Homemade orange marmalade is one of the easiest things to make.

In case the grocery store near you does not stock orange marmalade yet you are a fan of it, you can just make your own at home. Here is a simple recipe for homemade lemonade.

Store homemade marmalade in a cool, dry place. It will be safe to consume for up to one year.

Once opened, homemade marmalade should be stored inside the refrigerator. It will stay fresh for up to 3 months.

What can I use as a Peanut Butter alternative? Click to Read.

Orange marmalade is a popular ingredient in most parts of the world. In case you run out or can’t find any in a grocery store, you can substitute it with any of the ingredients we have discussed above.

Making savory dishes that require orange marmalade? Use chutney, jelly or the marmalades we have discussed above.

Apricot jam and fig jam work perfectly in sweet baked goods and in poultry. Use any marmalade on toast or bread to replace orange marmalade.

In case you are making a spicy dish, I suggest using apricot jam or peach chutney. They pair perfectly with spicy dishes. Orange juice is perfect for seafood.

It is quite easy and the recipe is straightforward. Let me know how your dishes turn out when you use these substitutes.

A recipe that challenges me is one of the reasons I relish cooking. When I come across a recipe that requires me to use an ingredient I have never used or heard of, I am thrilled. I want to discover the ingredients and see if I will love them. I am not always lucky in…