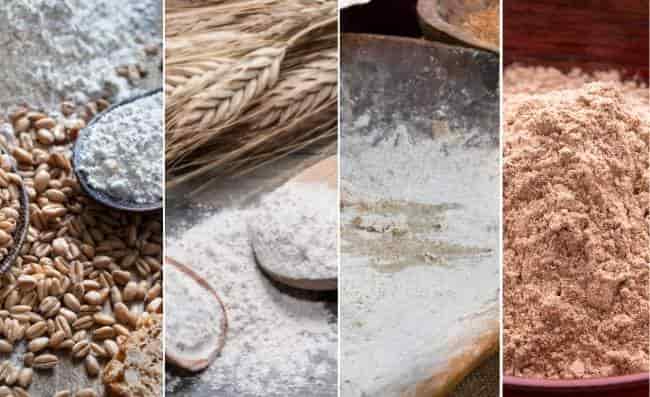 Spelt flour is flour that people derive from a specific subspecies of wheat. It contains brown freckles with some white in it.

Cooks use spelt flour to bake all types of delicacies. You can make cookies, cakes, pancakes, brownies, and any other treats you want with spelt flour.

Although this flour is healthy with more proteins than regular wheat flour, I dont like its taste, and I often use other alternatives.

Rice Flour vs All-Purpose Flour for Frying. Which is Best? Click to Read.

To understand what spelt flour is, we need to understand spelt wheat. we can trace this wheat from a long time ago. When processed, it produces two types of flour, white and brown.

Now, most people don’t use this flour for the following reasons:

● It has a lower gluten level than modern flour, making it weaker. Therefore, bread made from this flour does not have strong bonds.

● It has a lower volume. I mean that you need more spelt flour to make a loaf of bread than you need regular flour like wheat flour.

● It does not have that good a taste though this depends on personal preference.

I will discuss the best alternatives to spelt flour I know for this list. Read on to know them.

Spelt flour has low gluten levels compared to all-purpose wheat flour. That said, I want you to realize that having low gluten does not mean being gluten-free. It means that it has gluten, only that it is low level.

Gluten is responsible for your baking goods sticking together and not falling apart into crumbs. Wheat flour has high levels of gluten, and if you are looking to replace spelt flour because of its weakness, then wheat flour is the best alternative.

I love using wheat flour for all baking. It is sweet, and I can bake anything with it. I realized that when I use spelt flour to bake, especially bread, the volume of the bread significantly reduces compared to when I use all-purpose wheat flour.

Most probably, you have wheat flour in your kitchen. So, if your recipe requires you to use spelt flour and for some reason, you realize you don’t have it, or do not want to use it, you can use wheat flour in its place.

Einkorn flour, like Spelt flour, is ancient. People have cultivated einkorn wheat for a long time, and it’s one of the purest forms of grain.

It is one of the best substitutes for spelt flour because both the flours have a couple of similarities. They have low gluten levels and a higher protein level than other modern types of wheat. They are rich in antioxidants and minerals.

Emmer flour is an ancient flour that people extract from emmer wheat. It has a nutty flavor, a commonality it has with spelt flour. It has low gluten and is high in proteins.

This flour is another excellent substitute for spelt flour. It has a lower gluten level than spelt, and people commonly use it to make pasta. You can also use it for baking bread, cakes, and cookies.

If you want a substitute for spelt flour close to its taste, emmer flour is an excellent choice. Emmer flour, einkorn, and spelt flours are pretty similar.

Barley flour is flour that people get when they grind dry barley.

It has a ton of health benefits. It is one of the best-spelt flour substitutes because you can use it for baking practically any delicacy you can bake with wheat flour.

If you want to replace spelt flour with barley flour, I would advice you to mix it with all-purpose wheat flour. Seeing as barley flour is weak, you strengthen it with wheat flour.

In addition to that, combining the two flours makes the taste better than barley flour.

Amaranth flour has a nutty taste like spelt flour. The flour, however, is derived from amaranth seeds and not from grain. It is a good substitute for spelt flour, especially if you want to replace it with something with the same taste.

If you are looking to use amaranth on its own, you should use it for baking food that does require a lot of rising, like pancakes, if you want to use it for baking bread, for example, I would advice you to combine it with some other flour like wheat flour.

Amaranth flour is sweet and healthy. It is gluten-free, and if you are gluten intolerant, it is a perfect substitute.

Spelt flour has a low level of gluten, but that does not mean it’s gluten-free. Therefore, amaranth flour is a good substitute if you want a gluten-free substitute.

Rice flour is a perfect substitute for spelt flour if you are looking for a gluten-free alternative. This flour will serve you, especially if you substitute spelt flour because you are gluten intolerant.

Due to rice flour being gluten-free, it is weak, and you can mix it with another type of flour to strengthen it. However, you can use the four independently but not for baking bread.

This flour is made from rice, and you can buy it in grocery stores. It is rich in starch, and if you mix it with wheat flour, you can make some very delicious food.

Rice flour is an excellent alternative for spelt flour if you are gluten intolerant or just looking to eat healthily.

Kamut flour is another type of flour that people get from the ancient Kamut grain. Kamut and spelt grains are both ancient grains.

Even if the two types of flour have different tastes, they share various similarities. They both have high protein levels, rich in minerals, and have multiple vitamins.

It is a perfect substitute for spelt flour because it has a higher nutrient level than standard flour, just like spelt flour. As mentioned earlier, Kamut flour tastes nothing like spelt flour despite the numerous similarities.

Kamut flour is not gluten-free. Although it is lower than the gluten in wheat flour, it has gluten. You can use Kamut flour on its own to bake anything.

What is a Suitable Arrowroot Flour Substitute? Click to Read.

Spelt flour is not standard, and most people don’t use it. However, you might love using it because of its numerous health benefits. Or maybe, you come across a baking recipe that requires you to use spelt flour.

If you are in the middle of a recipe and you realize the spelt flour you have is not enough, I have discussed the seven best substitutes you can use in its place.

Some of these alternatives are simple to come by, and maybe you already have them in your kitchen, like wheat flour. Some of them have the same characteristics as spelt flour hence being excellent alternatives.

After reading these alternatives, I hope you will test each option. This way, you will realize what works best for you.

Whole milk is essential in most American kitchens. It has so many uses and a lot of people use it to make those delicious baked treats. You may need to substitute whole milk with something else for various reasons. The first and most obvious one is when you realize you have none in stock yet…

Gochujang is basically a Korean fermented chili paste. It is the perfect combination of hot, sweet, and savory flavors in one. In Korea, the locals use it as a condiment for octopus. In the United States, it is used in several dishes including salads, soups, meat, and vegetables. You can also add gochujang to rice…

Alum, also known as aluminum potassium sulphate, is a chemical agent with several culinary uses. You can use it in baking to leaven dough, keep pickles firm, and make bread spongy and crispy. Besides its culinary uses, alum has several uses in leather tanning, skin products, vaccines, water purification, and styptic pencils. Alum is a…