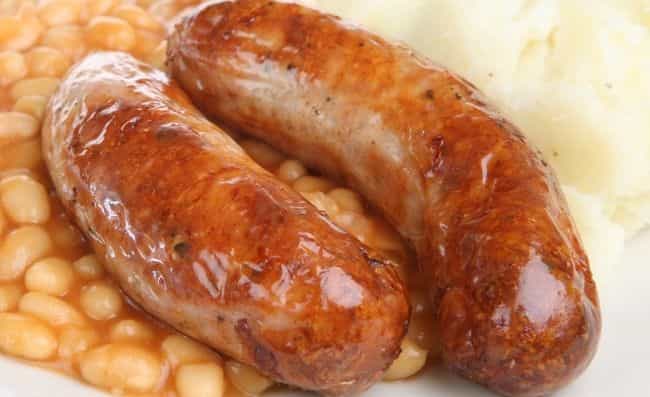 In the UK, most people call sausages bangers. If you’ve always wondered where the name comes from, this article is for you.

Sausages are called bangers because people nicknamed them during the Second World War since they used to explode with a bang while being fried.

This article discusses sausages in detail. We will look at their history, interesting facts, and the different types, but first, let us look at why they are called bangers.

Why are they called Bangers?

People have used the term bangers to describe sausages since time immemorial.

It was prevalent during wartime (both world war 1 and 2) when sausages used to ‘explode’ when being fried. However, the term was more common during the Second World War.

As discussed above, the slang bangers came up due to sausages bursting during cooking.

The bursting was primarily due to shrinkage of the sausages’ tight skin. At the time, most butchers also used cheap sausage fillers that couldn’t withstand the heat.

Another reason why the sausages burst so often was that butchers filled the sausages with more fat than meat. During the world war, meat was scarce.

Therefore, the butchers filled the fillers with a little bit of meat and a lot of fat. Due to the fat content, sausages would violently explode when placed in the pan.

How Long Does Deli Meat Last? Click to Read.

Manufacturers started making sausages over two thousand years ago, and they still do today. With time, manufacturers have adopted technical-scientific knowledge that has improved sausage production.

Sausages have been part of man’s diet for several centuries. The first mention of sausages is in a Greek play written in 500 BC. The Greek play is ‘the Orya,’ which translates to ‘the sausage.’

Why Are Short Ribs So Expensive? Click to Read.

Where do sausages come from?

The term sausage comes from the Latin word salsus, which translates to salt. Natives used the term salsus to refer to dishes with salt as a primary ingredient.

Several centuries back, there was no refrigeration, so people used salt to preserve various dishes, including meat.

Although the word sausage comes from a Latin word, it did not originate from Rome. Sausages reportedly originated from; Mesopotamia and Turkey.

Most people who lived in this region were Sumerians. They reportedly invented sausages in 3100BC.

The Turks also introduced sausages in 1000BC after inventing spices to dry and preserve sausages.

Sausages were convenient since they made it easy for locals to travel with their meat. Spices common at the time significantly influenced the sausage flavor.

Also, Check-Out: Why are My Dumplings Doughy?

Today, sausages are famous all over the world. They contain different meat varieties, including pork, beef, chicken, and mutton.

Manufacturers also garnish them using various spices. Typically, you serve sausages with other condiments or sauces.

Here are a few of the most popular sausage varieties.

These sausages contain chicken meat. Usually, they are softer in texture and more flavorful than pork and beef sausages.

Manufacturers make these sausages by curing them with aromatic wood. They burn the wood to produce smoke.

Salami, also known as Italian sausage, is a cured sausage. Manufacturers make it using fermented meat they air-dried. They use either pork or beef.

Salami is pretty famous in central and southern Europe, where it was once considered a peasant meal.

Blood sausages, also called blood pudding, are sausages filled with blood. Manufacturers cook or dry the filler containing blood until it can solidify when cooked.

They use blood from pigs, ducks, goats, sheep, or cows.

As the name suggests, manufacturers use boiled meat to make boiled sausages.

Manufacturers make beef sausages using ground beef. They are arguably the most common sausage variety and are more succulent than liver sausages and chicken sausages.

Cooked sausages is a term that refers to all sausage varieties that you can cook in the same way, i.e., frying, baking, curing, and smoking.

Most people around the world consider sausages a delicacy. There are different varieties made from various kinds of meat and seasoning.

Most people call sausages bangers in the UK. During the second world war, they got the nickname because they ‘exploded’ or burst during cooking.

I hope this article answered your question on why sausages are called bangers.

There are a few meals that taste as great as beautifully seared pork chops with a combination of vegetables and other delightful ingredients. Preparing a delightful and tantalizing meal of pork chops may not always be an easy task. There are some tips you can use to definitely use to prepare tender, juicier and tastier…

Almost all savory recipes start with one common ingredient- onions. I can bet that most, if not all, the savory dishes you’ve cooked in the past month contain onions. Onions are a base for most recipes. Although several people don’t appreciate the distinct onion aroma during cooking, they remain one of the most popular ingredients…

Also known as red oranges, blood oranges are flavorful and attractive citrus fruits. They are smaller than other orange varieties and have thick skin. The skin may have red blush, but they look like regular oranges more often than not. These oranges thrive in warm, temperate climates. In the United States, they grow in parts…