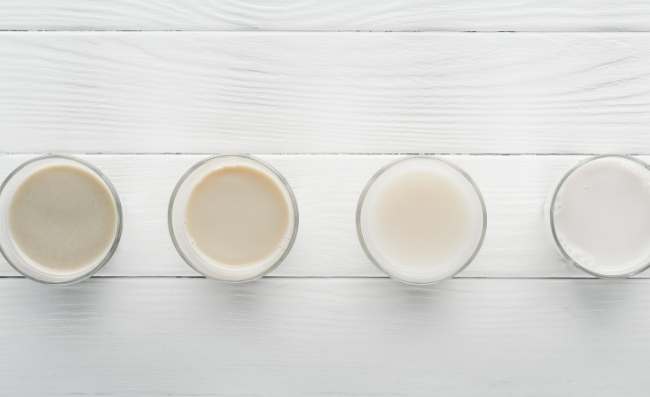 Whole milk is essential in most American kitchens. It has so many uses and a lot of people use it to make those delicious baked treats. You may need to substitute whole milk with something else for various reasons.

The first and most obvious one is when you realize you have none in stock yet your recipe calls for it. For some reason, I run out of whole milk without noticing. This is part of the reason why I started doing my research on whole milk substitutes.

Secondly, you might have just found out that you are lactose intolerant and need some non-dairy substitutes for whole milk. Another possible reason is that you are trying to cut down on your calorie intake.

Whatever the reason, we are lucky enough to have several whole milk substitutes available in the market. It is entirely up to you to decide which one you prefer more or which one best suits your diet.

Without further delay, let us delve into the details of these amazing whole milk substitutes.

Powdered milk is one of the best substitutes for whole milk. I love it because it has a very long shelf life compared to other substitutes.

Manufacturers make powdered milk by removing all the moisture from whole milk. The powder that remains is packaged and sold as whole milk.

I suggest using powdered milk as a substitute for whole milk in savory sauces and soups.

It adds creaminess to the soups and sauces as well as elevates the flavor of the dish. You can also add powdered milk to milkshakes and smoothies. Powdered milk can also be used in baking.

Powdered milk is one of my go-to substitutes because it is very easy to use, especially in baking.

To use powdered milk as a substitute, you should follow the instructions on the package to change its form from powder to liquid.

You will need to mix it with water to form an equivalent of the whole milk that your recipe requires.

What is the Best Substitute For Evaporated Milk?

Heavy cream is another good substitute for whole milk. The caveat with it is that it has a higher milk fat content compared to whole milk. Therefore, if you are watching your fat intake you may want to skip this one.

Heavy cream has a very thick consistency. It also has a rich flavor. A lot of recipes that call for heavy cream take advantage of the milk fat content to give the dishes a smooth texture. Heavy cream also enhances the flavor of every dish it is added to.

To use heavy cream as a whole milk substitute, you will have to dilute it with water. If you recipe requires you to use 1 cup of whole milk, mix ¾ cup of heavy cream with ¼ cup of water.

The combination makes for a perfect whole milk substitute.

Just like powdered milk, evaporated milk has a very long shelf life. A lot of people confuse evaporated milk with sweetened condensed milk but the two are very different.

Evaporated milk usually comes in cans. Manufacturers make it by removing some of the water content in the milk. The end result is usually milk that is more flavorful and with a deeper color.

You can use evaporated milk as a substitute for whole milk in baked goods, sauces, and soups. It is actually very simple to use. All you need to do is add some water to it and you are good to go.

Remember to look at the fat content in your evaporated milk before purchasing it. Some varieties have a high-fat content.

Half and half do not have a thick consistency similar to that of heavy cream. This makes it a good substitute for whole milk.

All in all, you will have to add a little water to half and half before using it as a substitute for whole milk. For every cup of whole milk that your recipe calls for, mix ¾ cup of half and half with ¼ cup of water.

Skim milk is the perfect substitute for those who love the taste of milk but are trying to reduce their calorie intake.

It is also readily available and you will have no problem finding it at the local grocery store.

Skim milk can be used interchangeably with whole milk. If your recipe requires you to use one cup of whole milk, just substitute it with one cup of skim milk.

Soy milk is one of the best non-dairy substitutes for whole milk. It is made from soybeans and is the go to option for those who are lactose intolerant.

In terms of flavor, soy milk has a very mild taste. However, this flavor may vary with different brands. Soy milk is also creamy and enhances the flavor of dishes it is added to.

I suggest using soy milk as a whole milk substitute in sauces and soups. The results will amaze you.

Coconut milk is actually my favorite non-dairy substitute for whole milk. It is made from the flesh of coconuts and water.

Coconut milk has a sweet but subtle flavor. It is also creamy thus a great addition to dishes.

Coconut milk also has numerous nutritional benefits. It has a significantly low fat content compared to whole milk and close to zero carbohydrates. Therefore, it is a good option for those on a low calorie diet.

You can use coconut milk in any recipe that requires you to use whole milk.

Almond is another good non-dairy substitute for whole milk. It is generally made from whole almonds. Some manufacturers make it by mixing almond butter with water.

Almond milk has a sweet and nutty flavor. I recommend using it as a substitute for whole milk in baked goods.  It also has a very low calorie content which makes it perfect for those on calorie diets.

Compared to other substitutes, almond milk is less concentrated because its main ingredient is water.

Rice milk has become very popular these days. It is made by milling rice and mixing it with water.

Therefore, if you are on a strict diet you may have to use one of the other substitutes.

Oat milk is also a good substitute for whole milk. It is generally made from oats and water but manufacturers add other ingredients like salts and oils to enhance the flavor as well as the texture.

Oat milk has a sweet and mild flavor. It can be used as a whole milk substitute in most recipes that call for whole milk. I like using it in my smoothies because it gives them that extra kick.

The only disadvantage with oat milk is that it has a high-calorie content. You may have to use another substitute if you are watching your calories.

Compared to the other non-dairy substitutes, macadamia milk is creamier and has a richer flavor. Looking to enhance the flavor of your smoothies? Use macadamia milk and thank me later.

Another advantage is that it has a very low calorie content. If you are on a low carb diet you should use macadamia milk instead of whole milk.

Cashew milk is another good non-dairy substitute for whole milk. It is made from cashew nuts mixed with water.

Like the other nut kinds of milk, cashew milk has a sweet and nutty flavor. This makes it a good addition to baked goods.  It also has a low-calorie content which is a plus.

Most of these substitutes work very well when used as alternatives to whole milk.

You have endless options. You can use any of the substitutes depending on your preference and dietary requirements.

Let me know how your dishes will turn out.

Currants are white, red, or blackberries with a mildly sweet and sour flavor. Additionally, they have a slightly acidic taste that balances out their sweetness. Dried and fresh currants are added to several recipes. You can eat them raw or add them to dishes that require cooking. Currants improve the flavor of dishes. Since currants…

If you are into preserves, I can bet you have interacted with orange marmalade in one way or another. Orange marmalade is a versatile citrusy preserve that is used in both savory and sweet dishes. It pairs perfectly with everyday meals and snacks. I love orange marmalade because I use it in several dishes including…