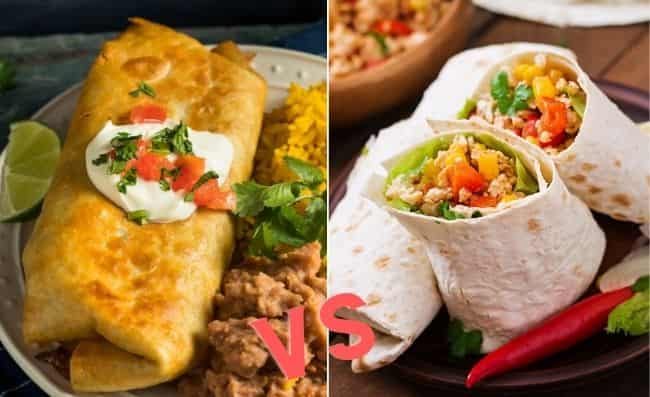 We all know that chimichangas are not burritos, but what exactly are the differences between the two?

The main difference between them is that burritos consist of tortilla wraps containing several ingredients inside them, while chimichangas are deep-fried burritos that you serve alongside a sauce, specifically sour cream sauce.

This article discusses chimichangas and burritos in detail. We will look at the main differences between the two and help you distinguish one from the other. Let’s dive in.

Loosely translated, the word burrito means little donkey. To date, it is unclear how burrito acquired its name since several myths are surrounding its origin.

It is believed that burritos originated from Mexico during the Spanish colonization when flour tortillas became popular.

Originally, the only fillings were meat and beans, but when the burrito was introduced to the United States, people started embracing other fillings.

A burrito is a Mexican dish that consists of a flour tortilla wrapped around various ingredients.

Also, Check out: Cheap Pantry Meals You Can Make! My Pantry Staple Meals

The two main ingredients in burritos are beans and minced meat. However, a burrito can contain several other ingredients including cheese, rice, salsa, lettuce, crema, and tomatoes.

Burritos may resemble tacos in a way, but they are completely different.

Currently, there are several burrito varieties available. You may come across veggie burritos, vegan burritos, small burritos, big burritos, and many others.

Where you come from may also determine the fillings in your burrito as well as its size. For instance, San Francisco burritos are usually large and contain several ingredients including cheese, beans, salsa, meat, rice, guacamole, and sour cream.

On the other hand, San Diego burritos are big and more often than not only contain guacamole, meat, and pico de gallo.

The constant is that the various ingredients are always wrapped in a flour tortilla.

There is a theory that chimichangas were accidentally created when a wrapped burrito that contained savory filling fell into a pan that contained hot oil.

Consequently, the burrito got deep-fried and ended up being crispy on the outside, but the filling inside remained juicy.

This accidental discovery resulted in chimichangas, a popular street cuisine that most people enjoy during lunch and dinner alike. They are said to have originated from Arizona in the United States of America.

To enjoy chimichanga, serve it hot alongside sour cream. It is usually crispy on the outside and the filling inside is usually juicy.

The two characteristics combined will satisfy your taste buds. Dip the chimichanga in sour cream for an enhanced flavor.

Also, Check out: Semolina vs flour (Is semolina better than flour?)

Differences between the two

There are several differences between chimichangas and burritos.

They include; the method of cooking, fillings inside the wraps, the serving method, origin, texture, and nutrition.

Chimichangas and burritos are cooked differently. Burritos are fresh wraps filled with different ingredients including minced meat, cheese, beans, salsa, and guacamole among others.

On the other hand, chimichangas are deep-fried, hence have a crispy outer layer.

Compared to burritos, the filling in chimichangas is usually meatier and spicier. Most burritos have less meat since beans are considered their main protein source.

If you are a meat lover, the chances are that you will enjoy chimichangas more since they contain a lot of meat. You’ll also enjoy them if you love spicy dishes. Burritos are more ideal for those who enjoy mild flavors.

Chimichangas and burritos are served differently. Normally, people serve chimichangas on a plate with side dishes.

Most times, chimichangas are topped with melted cheese or sauces, so you will need to use a fork and knife to eat them comfortably.

On the other hand, burritos are served like rolled sandwiches, usually wrapped in foil, so all you have to do is pick it up and bite into it the same way you would a sandwich.

Both chimichangas and burritos are now popular in most parts of the world.

In terms of nutrition, burritos may be healthier compared to chimichangas if you use ingredients that have a high nutritional value.

The beans in burritos contain fiber which plays a significant role in lowering the body’s cholesterol levels.

In comparison, chimichangas are not too healthy since they contain approximately 1500 calories per serving. They are deep-fried and topped with sauces, guacamole, or sour cream.

Which of the two is an authentic Mexican dish?

By now, you probably already know that burritos are an authentic Mexican dish. Chimichangas are not necessarily Mexican because they originated in Arizona. They are made by deep-frying burritos that have a savory filling.

Although there is a debate about the exact origin of burritos, it is an authentic Mexican dish. The original burrito consisted of a flour tortilla wrap that had minced meat, beans, and rice as the primary fillings.

Both burritos and chimichangas are found in Mexican restaurant menus, but the authentic Mexican dish is burritos.

Chimichangas and burritos have several similarities, especially in fillings, so it is no surprise that people easily mistake one for the other.

The main difference between the two is that burritos consist of fresh tortilla wraps that contain several ingredients inside them while chimichangas are deep-fried burritos that you serve alongside a sauce.

Other notable differences are the fillings, serving method, origin, texture, and nutritional value.

If you had a problem differentiating chimichangas and burritos, I hope you can now easily tell the differences between the two.

Gravy is a thick sauce made by thickening stocks with a roux made with flour and butter or oil. Usually, it is very satisfying with a fantastic flavor and texture. Gravy is relatively easy to make. However, it may end up tasting like flour for two reasons; you used too much flour, or your flour…

There is more that goes with tacos apart from the common sides of chips and salsa. Take your taste buds on a culinary adventure and try out one of these as a side during your family taco Tuesday, or whichever day you have tacos. Mexican Style Rice or Corn on the Cob Frijoles de Olla…

Polenta is a mush or porridge that is made from cornmeal. Usually, manufacturers use yellow corn to make polenta. Polenta is popular because of its versatility. It can be used to make a filling breakfast, a tasty lunch, or even an elegant dinner. In the past, polenta was considered the peasant meal in Northern Italy….

If you are asking yourself- What Does Cucamelon Taste Like? You are at the right place First things first, If you are a parent, I am sure the first thing that comes to mind is the cartoon series (cocomelon) that our toddlers have made us watch 1,000,000 times. However, Cucamelons are fruits that look like…

Also known as red oranges, blood oranges are flavorful and attractive citrus fruits. They are smaller than other orange varieties and have thick skin. The skin may have red blush, but they look like regular oranges more often than not. These oranges thrive in warm, temperate climates. In the United States, they grow in parts…