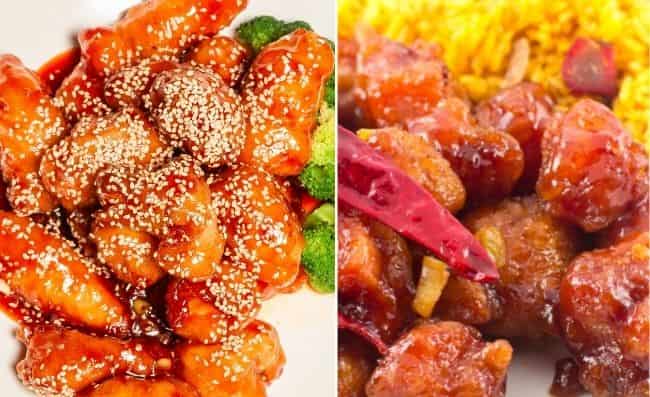 Did you know that it is estimated that in the United States of America, over 8 billion chicken wings and drumsticks are eaten every year? Imagine that.

With so many different ways to prepare chicken, sesame chicken, and general tso chicken are two of the top contenders.

Not to worry, this article shall cover both types of chicken in-depth, and in the end, I am sure you will be in a better position to pick what works best for you.

The sauce used on sesame chicken is usually made of vinegar, a bit of cornstarch, sugar, sesame oil (duh), chicken broth, and topped off with a sprinkle of sesame seeds. It is brown in color and has a semi-thick consistency (sticky if you’d like).

The seeds may either be roasted or not (this wholly depends on your preference and what you have available). Of course, you can choose to add spices such as ginger to your liking.

Curious about the name? It has been said that the moniker was picked from a martial artist and general by the name Zuo Zongtang. The stir-fried deliciousness is dressed in a sweet and sour sauce.

The recipe of which was curated by a Hunan cuisine chef based in Taiwan. In some places, it also goes by the name General Tao.

The sauce used in general tso chicken contains vinegar, soy sauce, rice wine, sugar, and other spices such as garlic. As opposed to the sauce used on sesame chicken, this one is thick in consistency and reddish in color.

During preparation, general tso chicken differs from sesame chicken in that it is prepared with some vegetables. During the stir-frying, onions and red bell peppers are added. Some people even go-ahead to serve it with broccoli.

So What’s the Difference and What Makes Them So Alike?

Also, Check out: How to Reheat Sweet and Sour Chicken

Which of the two is the Healthier Option?

Sesame chicken and general tso chicken are both dishes that burst with flavor and excite our taste buds. The question is, do they provide nutritional value in equal amounts?

Because the sauce on sesame chicken includes more sugar and carbohydrates, it is considered rich in fat. If you are watching your weight, it may not be the most ideal.

General tso chicken packs quite a punch in terms of cholesterol and protein. As such, both dishes should be taken with moderation and care.

How Sesame Chicken and General Tso Chicken Are Served

Sesame chicken is commonly served with a bowl of steamed or boiled rice.

Although, sometimes, but not always, it can be accompanied by vegetables such as broccoli and baby corn.

Steamed rice, broccoli, and carrots are the main sides that tend to be served with general tso chicken.

Also, Check out: How to tell if Chicken is done

How to Prepare Sesame Chicken at Home

How to Prepare General Tso Chicken In Your Own Kitchen

Although these two dishes have similar aspects, they also vary greatly.

All in all, both these dishes are delicious and, whichever you settle on, will be a hit with your guests.

Butternut squash is a delicious seasonal winter squash that is usually available between September and December. It is a great addition to both sweet and savory dishes. It is medium in size with a bell-like shape. Its long neck is attached to a bulbous end. Its skin is a light tan, and the skin is…

Everyone loves dumplings. They are savory and amazingly delicious. Simply put, dumplings are the ultimate comfort food. The balls of dough combined with tender meat, veggies, and rich, creamy broth are to die for. When cooked properly, dumplings should be light, tender, and fluffy. All you have to do is use a spoon to slice…