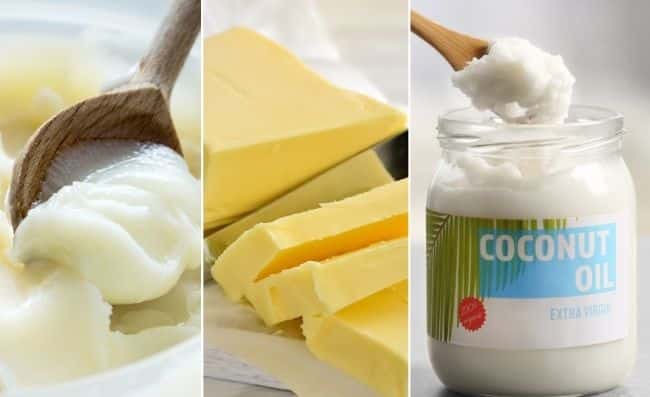 First things first, what is lard? Lard is a semi-solid ingredient that is made by rendering the fat tissue of the pig.

During the rendering process, manufacturers separate the pork fat from portions of a hog, the pork belly, or the pork shoulder.

Lard has been in existence since time immemorial. You are likely to find it in any old cookbook. It is used to improve the taste of roast turkey, slow-cooked casseroles, pie crusts, cookies, and even cakes.

Lard is pretty much odorless and tasteless. Additionally, it has a long shelf life. You can store it in your refrigerator for up to one year and it would still have its quality intact.

In the 1950s, a lot of people started avoiding lard because of the belief that it clogs arteries. At the time, a teaspoon of lard contained 115 calories.

However, lard made a comeback after new low-carbohydrate, high-fat diets made a debut.

There are several reasons why you may want to substitute lard with something else. Maybe the supermarkets close to you don’t stock it, or because it is made from pork which is not part of the Kosher or Halal diet, or you are on a diet that is calorie-restricted.

Another reason could be that you are on a plant-based diet and consequently can’t use pork fat.

I have come across several recipes (both old and new) that call for lard.

If you come across such recipes but have reservations about using lard or you just don’t have lard in stock, you can use a substitute in its place. Butter, coconut oil, beef tallow, olive oil, vegetable shortening, mashed banana/ avocado, and vegetable oil are some of the suitable substitutes for lard.

Without wasting more time, let’s discuss these substitutes and the various ways you can use them.

If you need an alternative in a recipe that requires you to use lard, try using any of the following substitutes.

Butter is my go-to lard substitute. It works well in most recipes, and it is a safe bet. Use butter to crisp up roasted poultry, in baking, in batters, and any other recipe.

I love butter because it is versatile and gives results similar to what lard does. It is important that you do not use high heat when using butter because its smoke point is lower compares to that of lard. Don’t use butter when making stir fry dishes because it will burn.

In case you have butter that is 85% fat, you may have to increase the amount that you use in your recipes. However, do not use it in baking recipes such as pie crust or cakes because the recipe will fail.

For every cup of lard that your recipe requires, use 1 ¼ cup of butter.

Coconut oil is another good lard substitute. I love it because just like lard, coconut oil has a high smoke point. Therefore, it is ideal for cooking on high heat and frying.

You can use coconut oil in baking recipes including biscuits and cakes. If you are on a plant-based diet, this substitute would also be ideal.

Substitute lard with coconut oil in equal measures. It is important to note that coconut oil will add a subtle coconut flavor to your dish, but other than that it will give you good results.

Beef tallow is very similar to lard. For starters, it is made by rendering down beef fat. If you don’t eat pork, or you are on a Halal or Kosher diet, this would be the perfect substitute for you.

Substitute lard with beef tallow in equal amounts. It will give you similar results in any recipe you use it in.

If you are on a calorie-controlled diet, beef tallow would not be an ideal substitute because just like lard, it is very high in calories. If you are on a plant-based diet, you shouldn’t use this substitute either.

If you want a plant-based substitute, olive oil is a great option. It would particularly work well in baking recipes.

It is important to note that olive oil may give your dish a mild olive taste. Therefore, it may not be an ideal substitute in all recipes.

Additionally, the smoke point of extra virgin olive oil is pretty low so it is not ideal for frying.  If you want to fry you should use another oil like canola oil.

Use the same quantity of olive oil as you would lard in any recipe.

Vegetable shortening became a go-to option in recipes that call for lard when people started avoiding lard in the 1950s. It is made from vegetable/ palm oil and soybeans and its flavor is very similar to that of lard.

Vegetable shortening is an ideal substitute for a wide range of diets including vegan, Halal, Kosher, and vegetarian diets. Additionally, it has a high smoke point which makes it ideal for frying.

As weird as it may sound, mashed banana and avocado would give you the same results that lard does in baking.

However, this substitute is not ideal for all baking recipes. I suggest using it when baking muffins, bread, cookies, and cakes.

The banana or avocado will give these baked goods the moisture it needs without the extra calories that lard has.

To substitute lard with mashed banana or avocado, use half the quantity that your recipe requires.

If while mixing the ingredients you notice the texture is not the way you want it to be, you can add more banana avocado. Just add a little bit at a time so that you don’t end up with baked goods that have a weird texture.

Vegetable oil would be a good alternative for frying because it has a high smoke point. If you are making a stir fry dish and don’t have any lard on hand, you can use vegetable oil instead.

The only disadvantage of using vegetable oil is that it generates high concentrations of chemicals. Therefore, it is important that you use it sparingly whenever you use it in place of lard.

Most of the lard substitutes we have discussed above are readily available. You can buy them at any supermarket or grocery store close to you.

The substitutes won’t give you the exact results that lard does. It is a little bit difficult to replicate the flavor and texture that lard gives dishes.

However, the substitutes we have discussed above will give you pretty decent results. Your dish will still taste amazing even without the lard.

I suggest that you try different substitutes on different occasions until you find one that works best for you.

It’s all about preference, what I think is the best option for me might not be yours, so experiment until you get one that is.

Try using the lard substitutes as discussed above and let me know how your meals turn out.

Falernum is a Caribbean sweet rum liqueur. It is flavored with several ingredients, including limes, ginger, almond, and other spices. Most people use this sweet rum liqueur to flavor tropical cocktails, but since it is not readily available, you need to know falernum substitutes you can use in its place. Despite being a liqueur, falernum…

Have you ever wondered how the raw fresh milk of a cow turns to the stringy snack that we love to tear and eat that is string cheese? I know I have. The process begins with whole fresh milk that is put in a pasteurizer. This step is important for the killing of any bacteria…

Feta cheese is an amazing ingredient used in numerous recipes. Most stores sell it in blocks. It has a crumbly texture and a unique flavor. It is kind of salty with a tangy flavor as well. Almost everyone I know loves the flavor of feta cheese. Feta cheese is made from a mixture of goat’s…

Salt pork is, by definition, salt-cured pork that is mainly obtained from pork belly. Salt-cured meat is, essentially, any type of meat that has been preserved using salt. Curing can simply be defined as a method of preservation or flavoring foods. The aim of adding salt is to ensure that any bit of moisture contained…