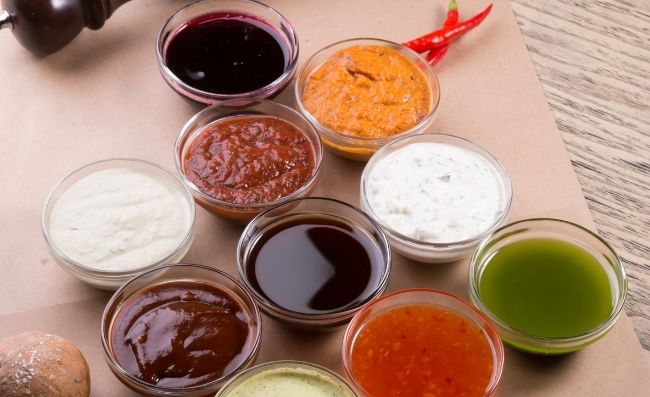 Are you looking for the perfect soy sauce substitutes for your recipe?

Soy sauce is a very popular ingredient, it is a must-have in my kitchen. There are three main varieties of soy sauce available in the market; light soy sauce, regular soy sauce, and dark soy sauce.

Dark soy sauce is a dark-colored sauce that is mostly used in Chinese cuisine. Compared to light soy sauce, it has a thicker consistency and a darker color, as the name suggests.

Dark soy sauce is popular for the umami flavor it adds to dishes and also the color it gives them.

It is commonly used as an ingredient in noodles and fried rice. Dark soy sauce is also added to marinades for a nice dark and shiny appearance.

In Asian kitchens, dark soy sauce is a necessity.  However, chances are that it is not one of the most commonly used ingredients in Western households.

If you ever need to use soy sauce in a recipe but have none in stock, you might have to opt for a substitute.

If you are feeling motivated, you can even make your own dark soy sauce at home.  Let’s discuss these substitutes in detail so that you know when to use which substitute.

There are several Asian sauces whose qualities are very similar to that of soy sauce.

Therefore, they can easily replace dark soy sauce in recipes. Here are a few substitutes that are readily available. You probably have some of them in stock right now.

Light soy sauce is one of my go-to substitutes because a splash of it gives my dishes a salty flavor similar to that of dark soy sauce and an umami flavor too. I particularly like using it in meat dishes because of how much it enhances the flavor.

Light soy sauce makes for a good substitute in recipes that call for dark soy sauce. If you are making an Asian-inspired meal, light soy sauce would not be out of place.

The only downside with light soy sauce is that its consistency is not as thick as that of dark soy sauce. Additionally, it is not as sweet as dark soy sauce and won’t give your dishes that dark color and silky appearance.

To make up for the sweetness, you can add a little bit of molasses. The molasses will balance out the salty flavor of the soy sauce.

If you are looking for a substitute that would add amazing color to your dish, consider using the oyster sauce. Other than the color, this substitute also enhances the umami flavor in chicken, beef, duck, and tofu.

It is important to note that oyster sauce will add subtle hints of caramel and oyster flavor to your dish.  Other than that, it works the same way that dark soy sauce does.

Use this substitute when making spicy noodles, simple beef dishes, or even kung pao shrimp.

Thanks to its dark and glossy appearance that resembles dark soy sauce, teriyaki sauce is one of my go-to substitutes. It has a sweet and salty flavor that is similar to that of dark soy sauce.

I love using this substitute in my stir fry dishes because of how irresistible it makes them look. You can use teriyaki sauce in savory dishes that call for dark soy sauce, marinades, and as a condiment.

It is notable that soy sauce is one of the main ingredients in teriyaki sauce. However, it contains other ingredients like garlic and ginger which may slightly alter the flavor of your dish. Personally, I feel like these two ingredients make my dishes taste even better.

Double black soy sauce is a dark soy sauce. It is much darker, thicker, and sweeter compared to the regular dark soy sauce as a result of using molasses as one of the ingredients.

It is essential that you use this substitute sparingly as it is much sweeter. Using too much of it would make your dish too sweet for your liking.

Hoisin is a colorful marinade that is very popular in Asian restaurants. It is normally added to vegetables, beef, chicken, pork, and duck.

I would describe the flavor of hoisin as sweet and salty, and that is probably why it makes for a good dark soy sauce substitute. I particularly love adding it to my stir-fry dishes.

Hoisin sauce won’t give you the exact results that dark soy sauce does because it has several other additional ingredients.

The texture and color of mushroom flavored dark soy is similar to that of dark soy sauce and it would therefore work well in recipes that call for dark soy sauce.

Worcestershire sauce has a salty and tangy flavor. This is the perfect substitute if you want to enhance the umami taste in your dish. It is perfect for marinades, sauces, and burger patties.

The only downside with this substitute is that it lacks the sweetness that dark soy sauce offers. Additionally, its consistency is thinner compared to that of dark soy sauce.

How to make dark soy sauce at home

Dark soy sauce and light soy sauce have several differences. For starters, has a thick consistency and a dark color. It adds both sweet and salty flavors to recipes.

On the other hand, light soy sauce has a thinner consistency and is more common in Western households. It is not as sweet as dark soy sauce and neither is it as dark.

Dark soy sauce is added to several savory dishes, marinades, and is often used as a dipping condiment. Light soy sauce is used in the same dishes too, but the main difference would be the color and lack of extra sweetness.

If you are looking to replace dark soy sauce in your recipe, your best bet would be light soy sauce, oyster sauce, or teriyaki sauce.

Homemade dark soy sauce is also a good option if you have some time to spare. It is quite easy to make and the recipe I have shared with you is straightforward and easy to follow.

Most people just use dark soy sauce to simply add color to the dishes they are making. Leaving it out would not have a major effect on your dish. It would still be enjoyable. So if you can’t get your hands on the substitutes we have discussed above, just leave it out.

Let me know how your dishes turn out when you use any of the substitutes we have discussed above.

How long should fruit be soaked for Christmas cake? The Christmas season is here, and with it, all the traditions that spell out its preparation. From putting up the Christmas tree and decorating it, to brightening up the house with an array of colorful lights, filling up stockings and laying out gifts, baking gingerbread cookies,…

First things first, what is sage? Sage is a herb from the mint family that has a distinctive aroma and flavor. Its leaves are greyish green in color. They also appear a little bit fuzzy. Sage has a very powerful warm flavor that tends to overpower other flavors in the dish. Its scent also overpowers…

Adobo seasoning is a flavorful spice mix. It is quite popular in Spain, Mexico, the Philippines, and part of South America. It is mildly spicy, hence appealing to most people. Adobo seasoning has several uses, but most people use it as a rub to enhance the flavor and color of meat. All you need to…