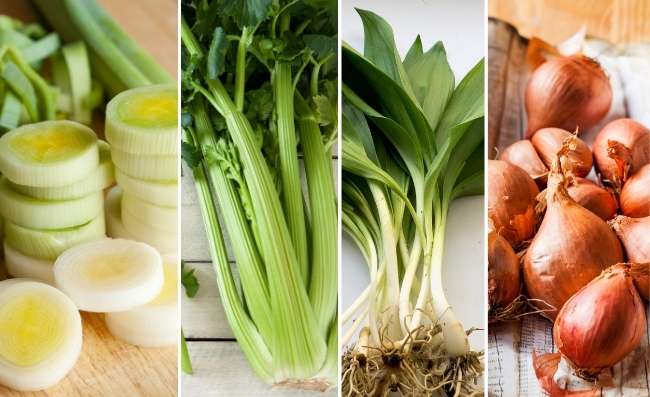 Leeks are vegetables that belong to the Allium family. In terms of appearances, they look like large scallions.

Leeks are a common ingredient. I have come across several recipes that call for leeks including salads, stews, soups, and several other cooked dishes.

You can either add leeks to your dish while cooking or cook them separately and eat them on their own. Some people also eat raw leeks. The white part of the bulb is the one that can be eaten raw.

I am of the opinion that you should only use the white and light green parts of the leek in your recipes. The dark green parts are not suitable because your body takes very long to process.

How To Cook With Leeks

To use leeks in your dishes, you first have to cut off the dark green parts and the roots.  Always keep in mind that the white and light green parts are edible parts.

Rinse the leeks and remove any dirt that may be trapped in the leaves. Part the leeks dry then slice, chop, or dice them.

Cooking with leaks is very easy. You can just use them the same way you use onions. You can fry, roast, boil, or braise them. You can also sauté or caramelize them using either butter or olive oil.

When cooking leeks, you need to be careful not to overcook them. If you do, they will get mushy and lose their amazing crunchy texture. If you are cooking leeks on their own, just cook them until they are tender.

In case you are adding the leeks to a dish, add them towards the end of your cooking so that they maintain their texture and flavor. Raw leeks are commonly used as an ingredient in salads.

Although leeks are an amazing ingredient, you may not always have them in stock. Therefore it is important that you know a few leek substitutes that you can use when you run out.

Shallots, onions, spring onions, wild ramps, celery, garlic, scallions, and onion powder are leek substitutes that you can use for tasty meals. Without wasting any more time, let’s discuss these leek substitutes.

There are a few things you need to consider when choosing a leek substitute.

First, although leeks belong to the same family as many other vegetables including shallots, onions, and garlic, the flavor and texture are quite different.

If you are simply looking to add flavor to a dish that has several other ingredients, then most of the substitutes we will discuss below will work just fine.

However, if leeks are the primary ingredient in the dish, you may have a little trouble substituting it with something else because the substitute needs to have a similar flavor and texture. Here are some suitable leek substitutes you can use for tasty meals.

Shallots and leeks belong to the Allium family. They have a delicate and mild flavor that can easily be confused with that of leek

Shallots are a suitable leek substitute. Although shallots do not have the bite that leeks have, they are still a decent substitute. Shallots will add a garlic flavor to your dishes.

To use shallots as a leek substitute, use 2 large shallots or 4 medium shallots for every large leek that your recipe requires. In case your dish does not have a lot of seasoning, you can use more shallots to boost the flavor.

Shallots are a good addition to sautés, soups, and risottos.

Just like shallots, onions belong to the Allium family. Both white onions and sweet onions are good leek substitutes. Yellow onions can work too if they are your only option

It is important you keep in mind that onions generally have a stronger flavor compared to leeks. Leeks have a mild and subtle flavor.

Personally, I prefer using sweet onions because their flavor is milder compared to white onions.

However, if white onions are the only ones you have in stock, you can use them. I don’t like using yellow onions because they have the strongest flavor of the three varieties.

For every large leek that your recipe requires, use one medium-sized onion. The flavor of your dish may vary slightly but the difference is hardly noticeable.

Spring onions have a sweeter and mellower flavor compared to the other onion varieties. This makes it one of the best leek substitutes. Its similar appearance is also a plus.

For every cup of chopped leek that your recipe requires, use one cup of spring onions.

I’m pretty sure you have come across wild rumps in grocery stores. Well, most of the time, leeks are packaged as wild ramps. So if you see wild rumps at the grocery store chances are that you are looking at leeks.

Don’t get me wrong, wild ramps do exist. However, the chances of them being sold in the United States are quite slim.

All in all, whether you buy the real wild ramps or not, you can use them as leek substitutes. Substitute leek with wild ramps in equal amounts.

If a recipe calls for one cup of leek, use one cup of wild ramps. They will give you similar results.

In appearance, leeks and celery are very similar. You can use celery as leek substitutes. However, there are a few things that you need to pay attention to.

First, celery cannot withstand long cooking times. It has the tendency to break down and get mushy when cooked for long periods of time.

Therefore, you should avoid using it in dishes that have a long cooking time including stews and soups. Alternatively, add the celery towards the end of your cooking to prevent it from breaking down.

I add celery towards the end of my cooking so as to maintain its crispy and crunchy feel. Celery is also my go-to substitute because it has a lot of health benefits.

Substitute leek with celery in equal amounts. If a recipe calls for one cup of chopped leek, use one cup of celery instead. Remember not to cook it for too long or it will become mushy.

I suggest using celery as a leek substitute in salads, stir-fries, and fried dishes.

Just like leek, garlic belongs to the Allium family. This is one of the reasons why it is a good leek substitute.

However, you should know that garlic has a more pungent flavor compared to leek. Therefore, they are a suitable substitute if your main goal is to add flavor to your dish.

You can either use roasted garlic or chopped garlic as leek substitutes. Just add a pinch to your dish to enhance its flavor.

If you want a substitute that will give you a texture that leeks give you, consider using one of the other substitutes.

Scallions are another suitable substitute for leeks. In fact, a lot of people have argued that they are the best leek substitute. Scallions are also referred to as green onions.

There are a few scallion varieties that have a stronger flavor compared to leeks, but most have a mild, subtle flavor.

However, they will not give you the same texture that leeks do.

In case you have none of the substitutes we have discussed above but you can use onion powder.

Onion powder generally works best in dishes that do use leeks as a main or primary ingredient. It is best suited for soups and stews.

To substitute leek with onion powder, use one teaspoon of onion powder for every cup of chopped leeks that your recipe calls for.

Leeks are one of my favorite ingredients because they have a lot of health benefits.

Research has revealed that leeks improve the body’s lipid profile for those with high cholesterol levels.

They also have flavonoid antioxidants that ensure your blood vessels are not damaged. On top of all this, they add an amazing flavor to dishes.

We all have those moments when we don’t have leek yet a recipe requires it. Luckily, the substitutes we have discussed above will give you amazing results.

Scallions are my favorite substitute because their flavor is very similar to that of leeks. I have used onion powder in my soups and stews and they turned out just fine.

I have also used shallots and onions as substitutes on several occasions and I have never been disappointed.

Let me know how your dishes turn out when you use these substitutes.

There is nothing as delectable as a well-prepared short rib. Short ribs are palatable, succulent, and rich in flavor. They are a must-have in catered events, gatherings, catered events, and reunions, thanks to their unique flavor and texture. Short ribs are versatile. You can slow-roast, braise, or grill them. They go surprisingly well with most…

Marash pepper is one of the most popular spices out there. For several years, chefs have used it in several dishes at restaurant kitchens. Marash pepper is a native to Turkey. Therefore, it is not readily available. Most people choose to use substitutes for Marash pepper in their dishes. You can use Marash pepper fresh…

Currants are white, red, or blackberries with a mildly sweet and sour flavor. Additionally, they have a slightly acidic taste that balances out their sweetness. Dried and fresh currants are added to several recipes. You can eat them raw or add them to dishes that require cooking. Currants improve the flavor of dishes. Since currants…

I am sure we all know about sriracha sauce and just how amazing and versatile a hot sauce it can be in the kitchen. Native to Thailand, sriracha sauce was introduced to the United States of America in the early 1980s and has since become the hot sauce of choice in many households. In Thailand,…

You are reading this article so chances are that you know exactly how awesome an addition curry leaves are to recipes. Talk of a picture-perfect herb. Obtained from the curry leaf plant they add a distinctly citrusy, aromatic flavor with a nutty aroma. These leaves are best, more flavorful when they are used fresh but…

Ham comes in a variety of vibrant tastes, and I believe this makes it stand out from any other ingredient for your sandwich. But how long does ham last? This mostly depends on the processing method because some may stay longer than others may. I come from a family of people who believe in fresh…