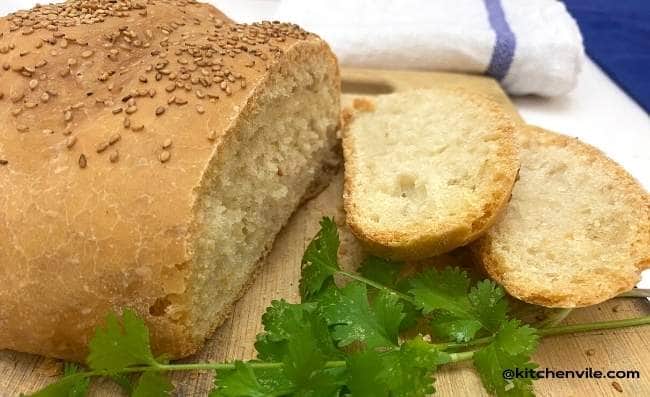 This Semolina bread recipe has a rich earthy flavor and a nutty undertone. It is one of my favorite bread recipes because of its salty-flavor. It is my go-to for French toast in the morning, bruschetta for lunch, or dipping in soup on a cold evening. It’s also excellent sandwich bread. I have to agree that Semolina flour makes the best bread.

My children love to watch the sequel of stories known as Story Keepers. Ben, the baker, was a local baker living in Rome during the tyrant rule of Nero. He owned a bakery where he had a stone oven and a pizza reel with a lon…ooo.ng handle that he used to remove his numerous loaves for sale or for Nero’s kitchen.

He used to make crusty loaves with beautiful shapes and visible cuts. Semolina is Italian bread, probably the recipe he used to make! “Bake bread like Ben the baker!” urges my daughter anytime she knows I am baking bread.

Let us briefly discuss the basic ingredients that form this perfect bread with a crispy crust. The specific amounts used in this recipe will be described in the recipe card.

I love primitive or what you may call ancient grains. They are nutritious and possess high fiber content.

I love Semolina flour because it is a high protein wheat and a versatile ingredient and can be used in so many recipes, including instant pot recipes such as semolina pudding, upma, and porridge.

This flour, found in most grocery stores, is a great alternative for other whole and ancient grains. I used Bob’s Red Mill Semolina flour, but you can use any brand.

Semolina dough can make many other goods other than bread, the dough can be cut into smaller parts forming various pasta shapes.

A very nutritious oil cold pressed from olives, a Mediterranean fruit. Olive oil is rich in flavor, and it moisturizes semolina bread dough. Semolina is suitable for vegans because olive oil is non-dairy.

To get the rich flavor and fantastic texture, I decided to use a poolish as a starter because it is high in moisture content. The poolish was left to ferment for two hours and then incorporated into the dough.

Sesame is an ancient oil-rich seed that has been cultivated from time memorial. The tiny weenie seeds possess a strong nutty flavor that can never go unnoticed when included in any recipe. An Italian bread known as pane siciliano, a lot of sesame is sprinkled on the top of the dough, a tradition handed down from generation to generation. The pane siciliano is a bread made from semolina flour.

These flours are lighter in weight than Semolina. We add it in order to make the bread less dense. The only difference between all purpose flour and bread flour is the amount of gluten in each. Bread flour contains more gluten, it gives the bread a chewy interior. In this recipe we use all purpose flour.

Let us find out how to make this delicious, golden brown bread with a beautiful crust.

Step 1: In a small bowl, whisk the yeast (you can also use active dry yeast), sugar, and flour, then add water as you continue to stir. The result should be a runny dough.

Step 2: Cover it with plastic wrap and let it rest for about one and a half hours. You can prepare the poolish, preferably a day before.

The average baking time of the loaves is about 30 minutes at 302 degrees f (150 degrees Celsius). The bread should sound hollow when tapped. The resulting loaf is golden crust bread with a soft, chewy interior.

If you do not have a pizza reel or stone, go ahead and bake directly on the baking tray that is lined with parchment paper.

Remove from the oven and place on a wire rack. You can serve the semolina bread warm or when they have completely cooled.

The sprinkling of the sesame seeds on top of the loaf semolina adds a nutty flavor and crunchy texture. This Semolina bread perfectly pairs with cold salads, delicious hot soups, and dips.

I find it absolutely delightful with pickles and jams for breakfast too! Try to make french toast; semolina bread and french toast are delightful.

It is a good idea to use this kitchen appliance if you have it, as it work a whole lot easier. It saves a lot of time and energy. All you have to do is place all the ingredients as listed above, let it begin the mixing, kneading, and first rise.

When the dough is twice the size, the timer should ring. You can let the bread bake in the bread machine or remove the dough and have it baked in an oven.

If you have a dutch oven, you can as well bake the bread in it, the only difference is that you will have to change the shape of the bread. This recipe does not require a dutch oven.

Yes, this is a nutritious bread rich in fiber that slows digestion, keeping you fuller for a long time. It is rich in folate, a B vitamins that is very important in early pregnancy for the baby’s development. Semolina flour contains iron and protein as well. Consuming this delicious bread carries with it numerous health benefits for your body.

No it is not; Semolina flour is obtained by milling durum wheat. All varieties of wheat contain the protein gluten. Semolina actually has higher gluten content than white flour.

Semolina Bread can stay fresh for up to three days at room temperature if it’s sealed in a plastic bag. However, it will keep fresh longer in a plastic bag or in an airtight container within the refrigerator.

As an experimental home baker I have learned this over my years of baking. Semolina flour tends to absorb a lot of water from the bread dough.

There’s a tendency that your bread will be very hard on the exterior and thus it is considered a crusty bread. Make sure you monitor the hydration and add water in case the moisture in the polish is not enough for

The dough, if the dough is sticky, grease your hands before handling it and resist the temptation of adding flour.

Make sure you monitor the hydration and add water in case the moisture in the polish is not enough for the dough.If the dough is sticky, grease your hands before handling it and resist the temptation of adding flour
Keyword bread recipe, semolina bread, semolina flour, sesame seeds

This Puppy chow recipe without peanut butter is one of the great recipes you can include for your holiday parties. I love it because it an easy no-bake dessert that I can prepare in less than 10 minutes. Puppy chow or Muddy Buddies must have gotten its name from its resemblance to puppy food! This…

My sons absolutely love pumpkin so we have been eating a lot of it lately and pumpkin pancakes are no exception. They enjoy having pancakes for breakfast so what’s better than having two of the things you love most mashed into one? I don’t even like pumpkin but I devour these pumpkin pancakes. Pumpkin pancakes…

Don’t we all just love potatoes? Generally, potatoes have always been a personal favorite. You can do so much with a potato. I won’t go into the details because if I do I would not be able to stop, so let’s just focus on today’s super amazing recipe. This recipe is all about potatoes, with…

I am a great lover of pancakes. They are a must-have for me and my family over the weekends. It has become some sort of tradition for us. I like my pancakes fluffy and moist on the inside with lots of my favorite syrup which is chocolate syrup. There is something about having pancakes for…