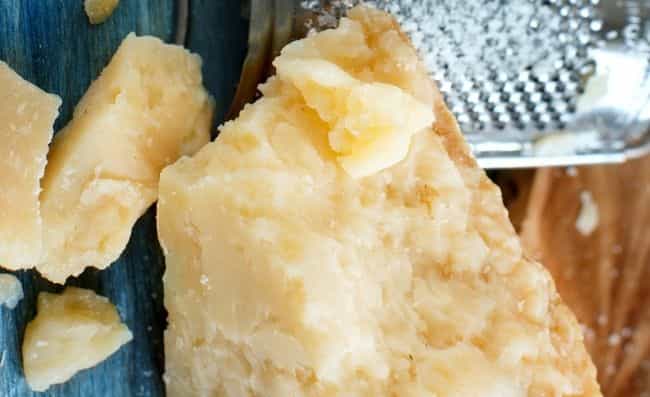 From soups to vegetables, cheese is an ingredient you probably use in your recipes. Romano cheese is quite famous, and I bet you have already used it or come across a recipe that requires you to use it.

It originated from Rome hence the name. It has a salty yet sharp taste and has a hard limpid texture. I usually use romano cheese toppings when making pasta, in baking, and I grate on pizza. It gives my dishes a unique but sweet taste.

Whether you have ever used romano cheese or are planning on using it for the first time, you should know that it is expensive and sometimes hard to find. It is also rigid, and you can eat it raw.

You can use it to complement and as a topping to your recipe.

It does not melt at room temperature, and when it is aged entirely, it is hard to melt under regular cooking heat.

That is why I have developed a cheese list that you can substitute it with if the need arises.

You might be trying out a new recipe that requires you to use romano cheese. But what do you use if you don’t have it? You can use grana Padano, asiago, parmesan, Piave, Spanish manchego, and nutritional yeast.

How to Substitute Romano Cheese

Romano cheese has a little sharp, salty, and nutty taste. If you are using it in a recipe due to its flavor, you must use an alternative similar or close taste.

If you are not using the cheese for its taste but other characteristics like its hardness, you must choose a replacement that has similar features.

In most cases, the replacement ratio of Romano cheese with any other cheese will be one is to one.

As a result, it means that if you were using one slice of romano cheese in your recipe, you would also use one slice of any other cheese that you choose as a replacement.

Romano cheese melts at an incredibly high temperature and may fail to melt under average cooking temperature. That is why most people use it as a compliment or toping. I use it to complement my soups, meatballs, and pasta, to mention a few.

Also, Check Out, the 7 Best Lard Substitutes when Cooking or Baking. HERE

The Substitutes for Romano Cheese

Now that we have covered what Romano cheese is, how it is used, and what to look for when replacing it, let’s dive into each substitute. We will see what makes them good alternatives.

Grana Padano is a hard cheese that originates from PO valley in Italy. It is manufactured from dairy cattle, and it takes somewhere from eight to twenty months to age.

Due to its hard texture, Grana Padano is a bit dry; thus, it is not that creamy. Compared to other hard cheeses, though, it is creamier than most. It has a high melting point, just like Romano cheese; thus, it is commonly used when raw, either as a compliment or topping.

It has a nutty flavor; hence, it is close to Romano cheese. Both kinds of cheese are both made in Italy.

Asiago cheese is another excellent replacement for Romano cheese. It is also from Italy in a town called Asiago. It is made from dairy cattle milk and is hard at the oldest age. When it is starting to mature, Asiago is semi-solid and very creamy.

If you want to use asiago cheese as a replacement for Romano cheese, you will use the fully aged cheese. The aged Asiago has similar characteristics as Romano. It is hard, does not melt quickly, and has a deep and salty flavor.

It can be used for pizzas and salads, to mention a few.

Young Asiago cheese is soft and creamy. The taste changes slightly and can quickly melt at room temperature. You can use it for cooking, unlike aged Asiago.

When you purchase Asiago cheese, ensure you check the age to ensure you get the right one to substitute your Romano cheese.

This delicious cheese has its roots in Italy. It is so fascinating how many types of cheese originate from Italy. It is like a cheese mine.

Parmesan is a hard type of cheese produced from cow’s milk. It takes a significantly longer time than Romano cheese to age. To entirely age, parmesan cheese takes anywhere between twelve to thirty months.

Parmesan cheese is a hard cheese that takes a lot of heat to melt. Thus, it is one of the best Romano cheese supplements. You can grate it over soups, pasta, pizza, or even eat it raw. I was so fascinated when I realized that I could boil it without melting and eating it.

It varies just a little bit in taste as compared to Romano cheese. Yes, it has a nutty flavor but with a touch of fruitiness in the taste. It is a perfect substitute for Romano cheese, especially if you want extra sweetness.

As expected, Piave cheese originates from Italy. It derives its name from the river Piave. It has a nutty taste with a touch of tropical fruit flavor.

It has a bit of bitterness, but it is almost undetectable. Piave comes from cow’s milk, and it has a crystalline texture.

Piave cheese has five aging stages. The first one is the softest and takes a maximum of sixty days. The last stage is the hardest, and it takes approximately one to one and a half years to mature.

When it has aged to its maximum, it has a hard texture and can be grated and used as a compliment or topping in different recipes that would have required you to use Romano cheese.

It has an almost similar taste to Romano cheese and is widely available in the united states and Europe. Thus, it is an excellent substitute.

Spanish manchego cheese originates from an area called la Mancha in Spain. It is made from sheep’s milk like Romano cheese, which can be scarce. It takes one to twenty months to fully mature.

It is rigid and compact with a butter-like texture when fully mature. You can use it for toppings in your recipes.

Although both Romano and Spanish Montego cheese are made of sheep’s milk, their taste varies. Romano cheese has that distinctive nutty flavor, while Spanish manchego has a fruity taste.

So if you are looking for a compliment depending on taste, manchego is not the way to go. However, if it is other characteristics, you are sorted.

This Romano cheese alternative is for my vegan friends who don’t consume animal products. I don’t want you to feel left out since all of these products we have talked about are from animals.

Nutritional yeast is one of the best vegan substitutes for romano cheese. Most stores sell it in granules, yellow flakes, or powder form. It is easy to find since it is sold almost everywhere.

It has a rich nutty flavor that is cheesy and creamy in a way. This taste is the one that makes it an excellent alternative to romano cheese, especially if you are looking for a vegan option.

The taste may not be precisely like Romano cheese, but it is close. However, it is rich in proteins, antioxidants, and vitamins, like romano cheese. It is an excellent vegan alternative for Romano cheese.

Romano cheese is a common but expensive cheese. At times, we find that we cannot afford it and are in dire need of replacement. Sometimes, we can afford it, but it is rare, especially original romano cheese(made from sheep’s milk).

A great substitute goes a long way in helping us at such times. That is the purpose of the above list. I discuss in detail what each replacement consists of and why it is a good alternative.

The ball is now in your court when all is said and done. Try each alternative and see which one works for you. Some are more pocket friendly than others, while others are sweeter. You know your taste.

If you are vegan, you can use nutritional yeast in place of Romano taste.

Now that you are covered discover your best substitute for Romano cheese with the help of the above recommendations. Cheers.

I first came across bulgur several years ago when I had tabbouleh, an amazing Middle Eastern salad that I came to learn has been around for thousands of years. This salad contains onions, tomatoes, herbs, and bulgur wheat. The salad tasted amazing. I had to ask what was in it, and that is how my…