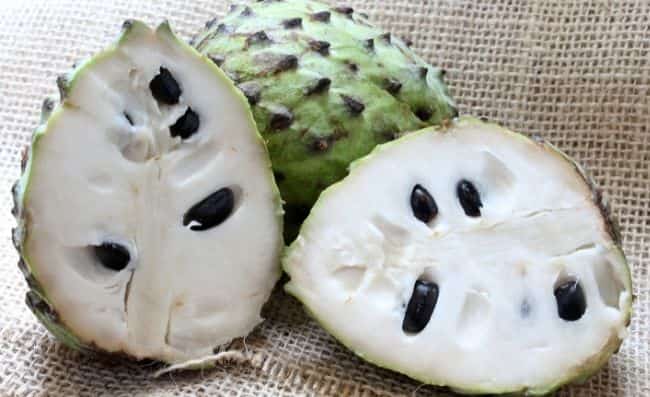 If you have never heard of soursop, you are not alone.

This tropical fruit is not too common in the United States, so chances are you won’t find it in your typical produce aisle.

Despite it being uncommon, it is widely in cooking as well as for nutritional purposes.

This article discusses everything you need to know about soursop including the flavor, where to buy it, how to eat it, nutritional benefits, and so much more.

It is a tropical fruit whose origin can be traced back to the American tropics and the Carribean.

The Annona muricata tree produces the soursoap fruit which is normally greenish-yellow in color.

Its skin is normally prickly and underneath the skin there is creamy white flesh.

For a long time, people have used soursop for medicinal purposes.

It has an enzyme called Annonaceous acetogenins which reportedly prevents the multiplication of cancer cells.

Also Read on : What does crocodile meat taste like?

The taste of soursop

The ripeness of soursop greatly influences its flavor. Its flavor can range from tangy to sweet depending on how ripe it is.

Personally, I would describe the taste of soursop as a combination of pineapple and strawberry. It also has a citrus-like flavor, but with a sweeter finish compared to other citrus fruits.

The flesh of ripe soursop usually has an edible white seed at the center. Although it is edible, most people find the seed unpleasant to eat.

This is because the seed has a gritty feel when chewed and also has an acrid taste.

When you eat soursop flesh after peeling off the skin, you’ll notice that it has a sweet-tart flavor.

If the fruit isn’t ripe enough, chances are that it will taste bitter and will have no hints of sweetness.

If you do not like the taste of soursop on its own, you can try blending it with other fruits like papaya or pineapple. Most people find the taste of this blended juice very pleasant.

Soursop leaves are also very useful. They are brewed to form tea.

The taste of brewed soursop leaves is very strong, therefore, you may have to use a sweetener to balance the flavor. You can use honey as a sweetener.

To make the beverage more palatable, spice it up using cinnamon, nutmeg, or ginger. You can drink soursop tea as a hot beverage or make it into iced tea.

What is Soursop’s Texture

Soursop texture is creamy and smooth, very similar to custard. However, it also has a fruity texture.

From my personal experience, I would say eating soursop is a totally different experience from eating other fruit.

Where to buy Soursop

Like I mentioned earlier on, soursop tends to be a bit difficult to find. You are unlikely to get it at the grocery store or supermarket close to you.

The best place to buy soursop is at international grocery stores. You’ll get the fruits at the produce section, next to other tropical fruits.

If you want ripe soursop go for the ones that are more yellow in color. The green ones are usually unripe.

Remember to store ripe soursop in the fridge. It will retain its quality for up to four days.

How to Cook and Eat Soursop

As discussed, soursop has a sweet flavor and creamy texture. Therefore, it is only natural that it is used in sweet dishes and not savory dishes.

It is commonly used as an ingredient for juices, smoothies, ice cream, and several other beverages.

There are several ways you can enjoy soursop. For instance, you could blend it with bananas, honey, and ice to make the perfect smoothie. You could also mix the soursop flesh with milk and blend until it is nice and smooth.

If you have never eaten soursop before, I suggest that you try eating it on its own to get the full experience.

Can you Eat Soursop Raw?

First things first, soursop skin is not edible. It is tough, and spiky.

Before eating soursop, you’ll have to use a knife to cut the rind away by making a cut at one end of the fruit and peeling it the same way you peel a banana.

The seeds of soursop should also be discarded before eating the flesh.

You can eat soursop raw, but you have to exercise caution since it can contain a toxin called piperine.

It is important that the soursop you eat raw is ripe. This way, it will not release any harzadous chemicals to your body.

Soursop has a striny texture, so cutting it up in cubes may prove a bit difficult. I suggest that you scoop out the flesh with a spoon instead.

Just discard the seeds in the process because they are unpleasant to eat.

Soursop has several health benefits. This is one of the reasons why it appeals to so many people.

It contains Vitamins A and C and is believed to relieve pain, reduce inflammation, and even aid in weight loss.

It also has a good amount of antioxidants which boost the body’s immune system.

The medicinal use of soursop is a bit controversial. Some studies have claimed that this tropical fruit can potentially fight against and even eliminate cancer cells.

However, most experts have warned against using it since they have not conducted conclusive studies in humans.

Other studies have shown that soursop has anti-bacterial properties and it has the ability to reduce blood sugar levels. Be warned that these studies are not conclusive.

Generally, soursop is a healthy fruit and would be a great addition to your diet.

Soursop is actually a very tasty free. If you have the opportunity to try it, I don’t see why you shouldn’t.

Its flavor is very exotic, more of a combination of pineapple, banana and strawberry. It also has other additional flavors that make it even more irresistible.

Other than its amazing taste, soursop has numerous health benefits. This should be enough reason for you to give it a try if you haven’t.

Try soursop today and let me know whether you like it.

Apple varieties have increased over the past years since growers are working tirelessly to create the perfect apple. Different varieties are usually crossed to form new ones. Growers take into consideration the shelf life, texture, flavor, and appearance while breeding different varieties to form exciting new ones. Jazz apples are one of those varieties achieved…