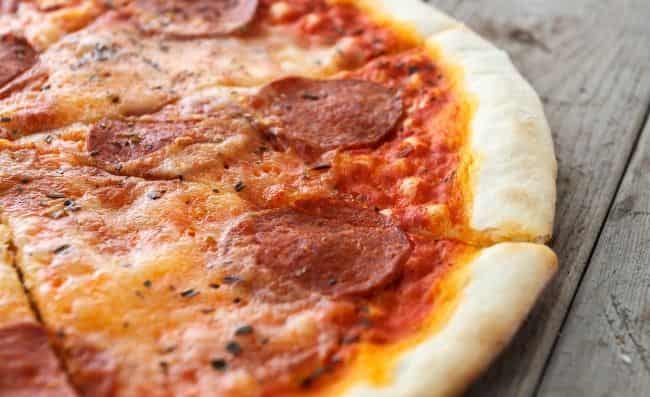 I haven’t met anyone who doesn’t like pizza (yet), which is probably why it is ranked one of the best appetizers. There are so many options available, and old-world pepperoni pizza has recently become the go-to option for many.

Old world pepperoni is an irresistible pizza topping. It tastes as amazing as it looks. If you’ve never tasted it and are wondering what it is, this article is for you.

We will discuss everything you need to know about this wonderful ingredient. Let’s dive in.

Old world pepperoni is a salami made from pork and cured beef.

It is usually bright red in color as it is seasoned with paprika and chili. The paprika gives old world pepperoni a classic smoky flavor.

When cooked, it curls up.

This characteristic sets it apart from regular pepperoni. When the pepperoni curls up, the edges cook up quicker and turn crispy.

Does cooked bacon need to be refrigerated? Click to Read.

How old world pepperoni is made

Additionally, they inject the meat with lactic acid bacteria. The bacteria lower the PH levels and preserve the pepperoni.

Once the meat is ready, they stuff it into collagen or natural casings and cook at low temperatures.  After that, they dry the pepperoni for approximately 20 days.

A brief history of pepperoni

Pepperoni emerged in the United States in the early 1900s when Italian migrants began opening pizzerias and butchers. So Italian migrants may be the ones that introduced this amazing topping to Americans.

Initially, pepperoni was only used as toppings for pizza in Italian delis. However, with time, manufacturers made subtle changes to the meat to make it more appealing.

This resulted in American-style pepperoni, which has artificial casing and finer ground meat.

Compared to regular pepperoni, this is much thinner with a tough texture. Additionally, it is brighter in color.  You will notice that it is harder to slice through.

Regular pepperoni also doesn’t curl up when cooked, and neither do the edges turn crispy. So if you like your pepperoni a little bit crispy, you should buy old world pepperoni.

Another difference is that it is spicier compared to regular American-style pepperoni. It is also smaller in size.

Despite these differences, the two have several similarities.

Where to buy old world pepperoni

Here are a few places you can find it

Before buying a whole sausage, you should consider buying pizza topped with this.

Most pizzerias have old world pepperoni pizza on their menu. If you like it as a topping, you can proceed to buy the whole sausage.

You can buy old world pepperoni at specialty stores, butchers, and delis.

Most retailers stock it, but if you don’t get it in stock, you could request the store manager to get it for you.

You could buy old world pepperoni online. I have come across several credible vendors who stock it. This is an ideal option if you live outside New York.

To be safe, choose one that is deep red in color. It is a little difficult to predict how your old world pepperoni will turn out when cooked, but the deep red one almost always tastes amazing.

If you buy it in bulk, you should freeze them for them to last longer.

Most people think that they can only use pepperoni on pizza. However, this is not the case. You can use it in several recipes.

Here is how you can use old world pepperoni.

If you want to enjoy the rich, spicy, bacon-like flavor, serve it with accompaniments.

For example, try serving it with toasted bread, cheese, and macaroni. You can also add it to your potato salads and sandwiches.

Another way you can enjoy sliced pepperoni is by serving them alongside crackers, cheeses, fruits, and baguette on your cheeseboard.

The flavor complements that of creamy cheese.

One unique feature about it is that it’s edged curl up when cooked.  When the edges curl up, they form a small lip. The lips cook faster than the base and usually have a crunchy bacon-like flavor.

So why exactly does it curl up when cooked? Two factors contribute to the curling;

The natural casing is made from sheep gut which shrinks when exposed to heat. This explains why it curls when cooked.

First, it is quite thick. Therefore, the bottom part of the pepperoni heats up slowly compared to the top part.

Thus, the top part shrinks at a faster rate and pulls the edges upward. As a result, the sides of the pepperoni cook quicker and become crispy.

Is pepperoni the same as salami?

Pepperoni and salami have several similarities, but they are not the same. Both of them contain pork and beef. Additionally, they have the same appearance.

Compared to salamis, pepperoni is way spicier. Additionally, it is primarily used as pizza toppings.

Note that the term salami refers to a variety of sausage sticks. Although salami is occasionally used as pizza toppings, its widespread use is in antipasto platters and sandwiches.

If you want to make your pizza at home, I recommend using this recipe. My pizza always turns out amazing.

The pizza has a rich flavor that you will fall in love with.

This is a versatile ingredient that you should consider stocking up on.

You can use it to make tasty pizza when you have guests over or satisfy your pizza cravings. Alternatively, serve it with the accompaniments we discussed above.

If you have never tried old world pepperoni, you are missing out. Try it today and let me know how you like it.

Cinnamon rolls are a favorite in most American households. They are usually, sweet, fluffy, and flavorful. There is nothing better than a warm, fluffy cinnamon roll on a Saturday morning. Cinnamon rolls are made with a lot of care and precision, which is why they are super delicious with the perfect texture. Unfortunately, there are…