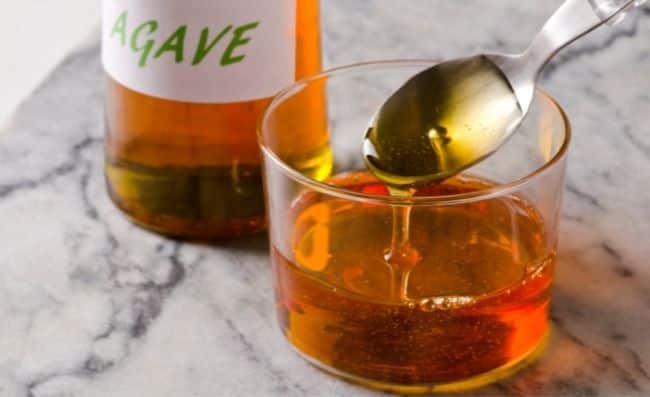 Agave nectar is a natural sweetener that you can use for topping, baking, or adding sweetness to drinks. If you are a vast baker, you might have encountered agave nectar.

It is sweeter than sugar and tastes like honey though the viscosity varies.

I prefer using agave nectar in baking since I wouldn’t say I like it in drinks. It is a bit expensive, and I find myself running to other alternatives regularly.

There are various sweeteners that you can substitute with agave nectar if you do not have it or don’t like it. They are honey, simple syrup, White sugar, Marple syrup, brown sugar syrup, molasses, and fruit syrup.

What is Agave Nectar?

Agave nectar is a syrup that people harvest from the agave plant. It is a natural sweetener meaning humans extract it from a plant. It is widespread in Mexico and is one of the ingredients used to make tequila.

Whichever way you decide to use it, you must remember that it is delightful, and you should be using it in moderation.

This syrup is not standard in the united states. It mainly grows in South Africa and Mexico. Its consistency is the same as honey, although it is slightly thinner.

I will cover the seven best substitutes that I believe can best replace agave nectar.

Some of these substitutes will have a different taste and even different consistency from agape nectar.

If you use one of the alternatives and you don’t get the feeling you want, you can add another one. Let us dive into the substitutes.

Also, Check-Out: What is a Perfect Apricot Nectar Substitute?

Honey is typical in all parts of the world. It is among the most known sweeteners. It has many uses, such as people using it as a preservative, a sweetener, a topping, in making drinks, and for medicinal purposes.

In this context, we are going about honey as a food substance. That is, as a sweetener and for toppings.

If you use agave nectar for baking or any other form and realize you ran out of it, you can use honey. Honey is something most of us have in our kitchens already.

Honey is one of the best agave nectar substitutes. It is very close to agave nectar in terms of consistency and sweetness. The viscosity and flavor may differ slightly, but it will do the trick. Plus, honey has more health benefits than agave nectar.

Simple syrup is a sweetener that comes from mixing sugar and water. It is a simple and cheap alternative to agave nectar.

You can buy it in any grocery store, liquor store, or make some for yourself. It is easy to make simple syrup since all you need is warm water and sugar mixed in the ratio of one 1:1.

Most people use Simple syrup as a sweetener for drinks. You can use it to add taste to iced tea and some alcoholic beverages.

Even if you don’t have anything else in these alternatives, I believe you have white sugar in your kitchen. We use sugar in the kitchen a lot. To bake, add sweetness to tea or coffee and a general sweetener.

If you are a rampant cook like myself, you already have white sugar since various typical recipes demand you use it. Even if you don’t have white sugar, you can buy it in the nearest grocery store.

It is cheaper than agave nectar and easier to find. The taste of white sugar differs from that of agave nectar, but if all you are looking for is sweetness, you can go ahead and use it.

To effectively replace agave nectar with white sugar, you need to add some water or oil to ensure even distribution in your recipe. However, if you are using it to sweeten your tea or coffee, you can go ahead and add it to your taste.

When I hear maple syrup, pancakes come to mind. I have grown with maple syrup as the designated pancake topping and associate it with them.

Marple syrup is sweet, and its sweetness is very close to agave nectar. If you replace agave nectar with maple syrup, you can do so in a 1:1 ratio.

Now, the consistency of maple syrup is not the same, but the difference is barely noticeable. That is why maple syrup is an excellent substitute for agave nectar. If you are using it, the measurements you use are the same. You don’t have to make any adjustments.

If you are a fan of waffles or breakfast, you might already have maple syrup. If you don’t have it, it is available in almost all grocery stores.

Molasses is a common sweetener, especially in the United States and Canada. In this case, I am talking about molasses made of sugarcane. Molasses made from sugarcane is what people primarily consume.

This syrup has an almost similar viscosity to honey though it is not as sweet as honey. You can use it as a sweetener in baking and drinks, and some people even use it as a topping.

Due to its widespread use, molasses is available in grocery stores. If you have tried a recipe that required you to use molasses, you might already have it in your kitchen.

It is also significantly cheaper than agave nectar and easier to find.

So, if you come across a recipe requiring you to use agave nectar and you don’t have it, you can quickly get it from the grocery store and use it instead.

The sweetness of molasses is almost the same as that of agave nectar. As a result, you don’t have to make many adjustments when substituting agave nectar with molasses.

You should note that they taste completely different, so the final taste of your dish or drink will be altered.

Fruit syrup is a sweetener that you can extract from fruits. It is a natural sweetener and is a suitable replacement for agave nectar. It comes from different fruits like grapes and pineapples, and so it tastes nothing like agape nectar.

This syrup is sweet, and you can use it in various cooking and baking recipes. You can also use it as a package syrup.

Because it is a product of natural fruits, it’s healthy and contains various vitamins and minerals. It is also pretty easy to prepare it at home, another reason why you can use it to replace agave nectar.

If you use fruit syrup as a substitute, note that the flavor is very different. It will sweeten your dish or drink, but it will taste different.

Brown rice syrup is the last agave nectar substitute I will recommend because it is not common. I recommend it because it is high in sugar levels. In short, it is very sweet hence a perfect sweetener.

As the name suggests, brown rice syrup is a product of brown rice. It has dark brown color and is made by adding enzymes to cooked brown rice. The enzymes break the starch from the cooked rice into small granules of highly concentrated sugar.

This syrup is not common in the kitchen, but you can still get it in some stores. If not, you can as easily order it online.

Due to its high sugar levels, brown sugar is not the best healthy alternative to agave nectar if you are concerned about your health. It, however, cannot hurt to use it once in a while.

Agave nectar is a somewhat expensive and not a so healthy sweetener. You may come across a recipe that requires you to use it, and you don’t like, or don’t have it. Or, you may be looking for a healthier alternative.

Whatever your inspiration, the substitutes I have recommended above will go a long way in ensuring your recipe is sweet as you intend it to be.

Some of these agave nectar substitutes, like fruit syrup, are healthier alternatives. Like white sugar and molasses, some of them are easier and cheaper to acquire, or you already have them.

They all have differing consistencies, tastes, and viscosity. For that reason, you might find that the substitution ratios differ from one alternative to the next.

When using some substitute, you might be required to use more to acquire the same level of sweetness as very little agave nectar. In some other cases, the ratio of substitution will be the same.

Now that you know what you can use to substitute agave nectar choose according to availability and your preference. Cheers.

Can scrambled eggs be frozen and reheated? Scrambled eggs are fast and easy to make as a delicacy, especially for breakfast. Eggs generally contain a lot of protein, folic acid, and other minerals and vitamins. This makes them nutritious and healthy. They are also versatile and can be made into many different recipes and forms,…

When I think of the mystery ingredients I used to see in my mom’s pantry, cream of tartar always comes to mind.  It is one of those ingredients whose use you can’t guess at all. You either know it, or you don’t. There is no room for guesswork. In the past years, I have come…

Celery seed has always been my go-to seasoning whenever I want to add natural flavors to my dish. It blends in perfectly with almost all my other spices which makes it a great addition to my favorite dishes. Celery seeds are harvested from the wild celery plant. In the past, most people used celery seeds…

Cardamom as we know it is a spice that is used in meal preparation throughout the world. That is, from India to Spain and all over Europe to the Americas and even in Africa. Cardamom is one of those versatile spices that is somewhat complex in flavor. This is because it simultaneously delivers spicy and…