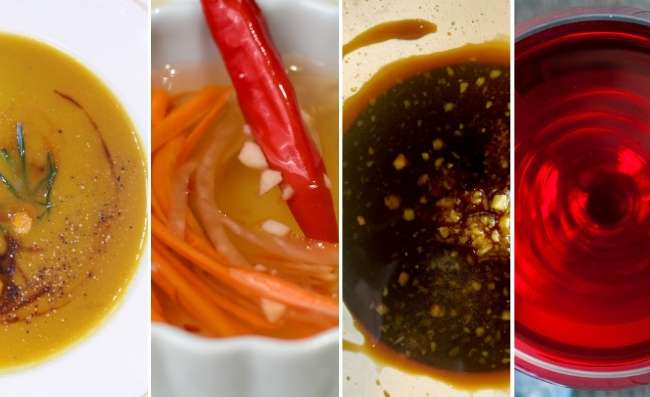 I have come across so many recipes that call for Worcestershire sauce. It is a popular ingredient that is added to a variety of dishes.

Wondering how it’s pronounced, well, Worcestershire is pronounced as “Woo-ster-shirr”. So what is this ingredient?

Worcestershire sauce is basically a concoction made from fermented malt vinegar and other elements like molasses, garlic, onions, anchovies, lime, tamarind, soy sauce, and palm sugar among other seasoning agents.

The combination is then poured into wooden barrels made of oak and left to mature for several months.

They came up with the original “The Original Lea & Perrins Worcestershire Sauce” which is legendary.

When to use Worcestershire sauce

This sauce works perfectly in savory dishes. If you want to intensely flavor a dish, then Worcestershire sauce is exactly the ingredient that you need. A small amount of this amazing sauce goes a long way.

You can also use Worcestershire sauce in meat marinades. The flavor brings out is just out of this world. The same goes for stews and stews.

This sauce is also a great addition to salads. I’ve also seen people using it in sweet-savory cocktails and they taste amazing.

Worcestershire sauce also complements cheese dishes. Be it a cheese sauce or a cheesy toast, it will test better with some Worcestershire in it.

These are just a few of the recipes where you can use Worcestershire sauce. It is evident that the sauce is versatile and the possibilities are endless.

We have all had those moments where we need to use Worcestershire sauce in a recipe and realize that we have none left.

At times like this, running to the grocery store to buy some is out of the question. So what do you do?

Before getting into the details of these substitutes, we need to know the exact flavor we are going for. For starters, Worcestershire sauce has a unique combination of flavors.

Most substitutes will not have the exact flavor that Worcestershire sauce has, but with a few alterations, they will taste very similar.

The more flavor notes you are able to achieve, the better your substitute will be.

Save for oyster sauce, fish based substitutes are made from fish sauce.

You can use the fish sauce on its own or add more ingredients to make it more similar to Worcestershire sauce. Here are a few of the fish based substitutes you can use.

Naturally, fish sauce is very salty. It also has a slightly sweet and funky flavor. Since it is made from fermented anchovies, its flavor is similar to that of Worcestershire sauce.

Substitute Worcestershire sauce with fish sauce in equal amounts. I suggest using this substitute in soups, chili, and meatloaf.

This combination makes for a great Worcestershire sauce. The red wine vinegar tones down the pungent flavor of the fish sauce.

To make the substitute, combine equal amounts of fish sauce and red wine vinegar then add a pinch of salt.

Be careful with the salt because fish sauce already contains salt and adding too much of it would make your dish too salty.

Some varieties also contain cornstarch as a thickening ingredient. Oyster sauce is a great addition to stir fry’s because of the sweet and umami flavor that it adds to them.

When using the oyster sauce as a substitute for Worcestershire sauce, you should keep in mind that it has a very low salt content. Therefore, you may need to add more salt to your dish.

The combination of fish sauce and tamarind concentrate is a good substitute For Worcestershire sauce.

To make the substitute mix equal amounts of fish sauce and tamarind concentrate. Mix the two ingredients together until they are fully combined and you can’t see any lumps.

Fish sauce mixed with tamarind concentrate has both sweet and savory notes which is the flavor you want to achieve.

Fish sauce, soy sauce, and brown sugar are a perfect combination if you want a fish based Worcestershire sauce.

Just make sure that you dissolve the brown sugar completely.  You can use this substitute the same way you use Worcestershire sauce for your recipes.

Soy based substitutes work quite well because they have a tangy, salty, and slightly sweet flavor.

They also undergo a fermentation process which gives them a funky flavor that is similar to that of Worcestershire sauce. Here are some of my favorite soy based substitutes.

Miso paste is a good substitute because just like Worcestershire sauce, it undergoes a fermentation process.

Simply dilute the miso paste using water, mix till the two ingredients are completely combined, and then add it to your dish to get that amazing flavor. Don’t use this substitute in cocktails because it is cloudy.

This combination makes for a good Worcestershire substitute because of the salty-sweet-tart-umami notes. Just mix soy sauce and apple juice in equal amounts and you are good to go.

It’s the safest option if you are skeptical about mixing soy sauce with other ingredients.

I suggest using this substitute in meatloaf, burgers, stews, and soups. If you are making a salad dressing or cocktail, use another substitute because this particular one may be too thick for your liking.

Using wine as an alternative to Worcestershire sauce will also give you good results. The best part is that you only need to substitute them in equal amounts.

Wine based substitutes won’t have the spicy notes that Worcestershire sauce has but they will still give you good results by elevating the flavor of your dish.

Here are some of my favorite wine based substitutes.

Red wine has a bold flavor that will definitely elevate the flavor of your dish. I love using it in braises, meatloaf, stews, and burgers.

When using red wine as a Worcestershire substitute, use the same amount that a recipe calls for.

Dry sherry is actually fortified with brandy. It has a floral, funky, and earthy flavor which elevates the flavor of any dish it is added to.

When using dry sherry as a Worcestershire substitute, you should add a little bit of salt to your dish because it does not have savory or spicy notes.

Chinese rice wine is a good Worcestershire substitute because it is salty and your dish will not end up having an alcohol aftertaste.

Vinegar is usually aged and fermented so they have a flavor profile that is similar to Worcestershire sauce.

In case you do not have any of the substitutes we have discussed, you can use barbeque sauce.

Barbeque sauce is sweeter compared to Worcestershire but if you do not mind the sugar, it will work just fine.

If you are like me you have several questions about tortillas. How long are tortillas good for? Do they expire or go bad?  How do you store them so that they have a longer shelf-life? Well, you would be glad to know that I have answers to almost all your questions. First things first, what…

Challah is a traditional bread popularly made by Jewish people. It is particularly common during Jewish events, and most people laud it for its sweet eggy taste. The bread is normally golden yellow in color due to the eggs used in the recipe. You can make challah bread using simple ingredients. Challah bread recipes may…

What can you replace lemongrass with? Lemongrass is a unique herb, a tropical island plant of the grass family. Common in the dishes and cuisines of Southeast Asian countries such as Thailand, Cambodia, the Philippines, and Vietnam, it adds a zing to your meals- an intense herbal and citrus flavor, and pleasantly indescribable scent. Many…

Parchment paper is every cook’s best friend. If you are an adamant baker, you might have come across this paper. It is also known as baking paper, and you can use it in various ways. Personally, parchment paper is what I use when baking cakes and cooking meat. It ensures that my cookies and cakes…

A while back, I was looking for ‘a perfect’ cheese that I could use in my recipes and eat it raw, maybe with some fruits. I came across a few options, but it ended my search when I discovered Havarti cheese.  This is a cheese that you either grill, slice, or melt. It is perfect…