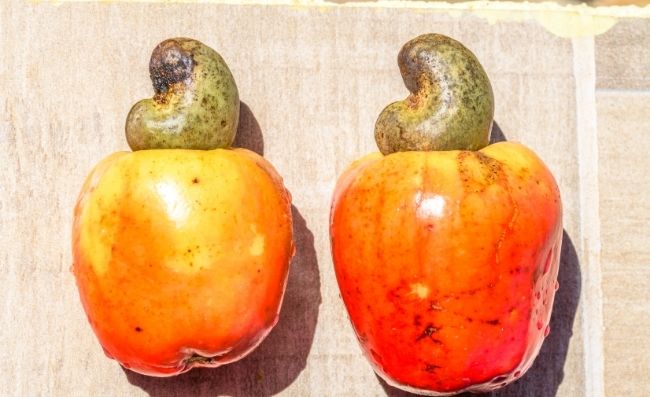 The cashew apple is commonly referred to as the cashew fruit.  It is a fleshy fruit that is usually attached to the cashew nut.

Ripe cashew apples are usually red or orange-yellow in color. Like most tropical fruits, they have a sweet and fruity aroma.

If you are here because you have no idea what cashew apples taste like, then you are at the right place. Simply put, I’d say cashew apples have a bitter-sweet flavor with acidic undertones.

We will discuss in detail the flavor of cashew apples as well as their texture, appearance uses, and how to serve them.

Although cashew apples have a tropical flavor, the taste is not entirely fruity.  I usually detect mango, citrus, cucumber, and other non-sweet flavors. To sum it up, I would describe the flavor of cashew apples as bitter-sweet and slightly acidic.

Cashew apples also have a very unique texture. The apple is not as hard as the cashew nut.  It is densely fibrous. As you eat it, it becomes rather juicy.

The cashew apple is squishy but not as squishy as the mango. It is also chewy which is unlike most tropical fruits. I’ll be the first to admit that the first time I ate cashew apples the chewy texture surprised me since I was not expecting it.

If you are wondering whether you will like the taste of cashew apples, chances are that you will.

No one in my circle hates the taste of cashew apples yet we all have very different preferences.  If you like mangoes or guavas, you will definitely like cashew apples.

I insist that the best way to enjoy cashew apples is by mixing them with other ingredients. By this, I don’t mean any ingredient. You need to go for the right ones that complement the flavor of cashew apples.

If you are making a smoothie, mix the apples with bananas or pineapples. These two fruits enhance the flavor of the smoothie.

Some people do not like the astringency of cashew apples.

If you are one of them, I suggest steaming the fruit for approximately 5 minutes before washing them in cold water. Alternatively, you can steep the fruit in boiling salt water.

Are cashew apples edible? How to serve them

This is a very common question since most people are only familiar with cashew nuts. Cashew apples are edible.

The most traditional way to consume them is in tea. Jamaicans use apples to make cashew apple juice which is very popular in the region.

Cashew apples can be eaten fresh or cooked. They are a common ingredient in several recipes. You can roast them, stew them, braise them, or even blend them into your smoothies.

If you want to serve them fresh, simply chop them up and season with your favorite ingredients. I usually add one diced red onion, fresh cilantro, and a squeeze of lime.

This makes for the perfect side dish or condiment. You can even add it to your vegetable tacos as a topper.

When cooking with cashew apples, the goal is to accentuate the tart and sweet flavors. I do this by adding a splash of lemon juice and a sweetener like brown sugar.

You can use cashew apples in curries for an authentic bitter-sweet flavor.

As we all know, preserves are made by chopping small pieces of fruit and mixing them with sugar and syrups. They are mostly used in cooking and baking. You can use cashew apples to make homemade preserves.

Chutney is a gluten-free condiment made of vegetables, fruits, herbs, spices, and vinegar. It balances out or highlights specific flavor profiles in dishes. Try adding cashew apples to your chutney for the best chutney you have ever made.

You can use cashew apples to make jam. Cashew apple jam is one of my favorite jam flavors.

If you want your smoothie to taste better than it usually does, blend in some cashew apples. You will love the flavor it brings out.

Like I mentioned at the beginning of the article, Jamaicans add cashew apples to tea as they brew it. The flavor of the tea is amazing. I personally loved it the first time I tried it.

In India and Tanzania, cashew apples are mashed, fermented, and distilled to make strong liquor.

Discarded cashew apples that are unfit for consumption are used as animal feed.  Animals also eat cashew apples straight from the trees.

Cashew apple/ cashew fruit is basically the fruit that attaches itself to the cashew nut.  It has a soft texture and a distinct bitter-sweet flavor that I find very pleasant.

You can eat cashew apples fresh, mixed with seasoning, or use them in baking or cooking. You can even blend them into your smoothies or add them to your vegan tacos.

Next time you see cashew apples at the store, buy them and try them out. They might just become your go-to fruit. They have several uses so you do not have to stick to eating them fresh only.

Many studies have shown that the consumption of turkey has grown considerably from the 1970s until the present time, and is currently the fourth largest protein choice among Americans. In fact, a report by the University of Illinois Extension shows that as of the year 2012, the average American consumed at least 16 pounds of…

Leeks are vegetables that belong to the allium family that also comprises of onions, scallions, and garlic. They are prized for their combination of a mildly sweet and subtle sour onion-like flavor that makes for a delicious taste and aroma. Younger leeks are favored in raw preparations such as salads because of their more delicate…