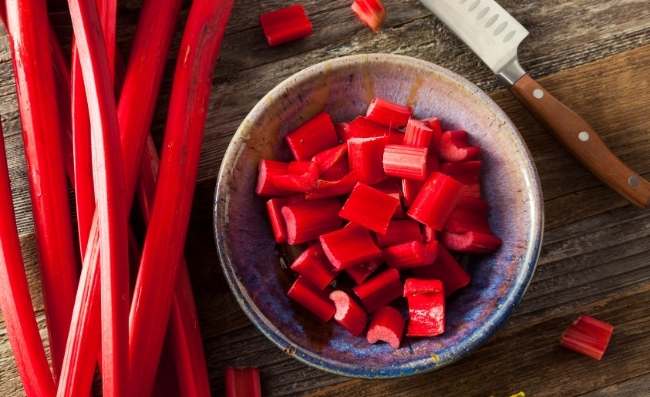 Although it can be consumed raw, it probably will not be enjoyable since it is quite sour and has a bitter taste in that state. It is no wonder a lot of people prefer to cook it with some sugar.

In other simpler words, the rhubarb plant has one of those tastes that we commonly refer to as an acquired taste.

What does rhubarb taste like? To be quite honest with you, rhubarb is one of those plants that are low in sugar content that is naturally occurring in plants. What this means is that it is quite sour, especially when taken raw. Thus, you may need to add some sweeteners as you use it.

Looking at it for the first time, I am sure many have confused rhubarb for some version of reddish-purple or greenish-red celery. I know I have.

Rhubarb which originates from Asia is a perennial plant that has long been used for mainly medicinal purposes but can also be used for culinary purposes. You may be wondering what it looks like.

Well, rhubarb has broad leaves with a thick, fleshy pink stalk. Botanically speaking, rhubarb is treated as a vegetable however, the stalks of the plant are often taken and treated as fruits in their preparation.

Further, there are essentially two main types of rhubarb. These are forced rhubarb and maincrop rhubarb. Forced rhubarb is usually characterized by having rather long and pinkish stalks and leaves that are yellow or lime green in color.

They are also considered to have the most delicate flavor. Maincrop rhubarb on the other hand have much thicker stalks that are bright red with leaves that are brighter green in color.

However, their stalks can also be pink, pinkish green, or green. In terms of flavor and taste, maincrop rhubarb is said to have a more pronounced flavor to it.

How To Harvest Rhubarb

Let us just say that growing rhubarb is for those with loads of patience. This is because, to begin with, rhubarb takes up to one whole year to grow.

Sometimes they may even take two to three years to mature. The wait can be totally worthwhile though once you have your rhubarb in front of you and you are enjoying it in a meal.

A lot of farmers state that there are many ways to plant: from seed, crown, bare root, or division. In addition, if you do not have enough space in your kitchen garden, you can always opt to grow your rhubarb in containers or sacks.

When it comes to knowing when it is ideal to pick the ready and ripe rhubarb all you really need to keep in mind is that the stalks of the rhubarb plant need to be at least 12 inches in length.

It is also advisable to wait until there are about 10 stalks on the plant since we want some to remain when we have completed the harvesting.

As for tools to use, the most ideal and suitable tool to use would be your hands. Yes, you can use a gardening knife but that would then risk accidentally cutting some young stalks that you may not have intended to cut.

Using your hands, all you need to do is to properly grip the particular stalk that you want to harvest preferably at the bottom, and give it a slight twist and a slight tag or pull.

Without a doubt eating rhubarb can have an added advantage to your diet in terms of it being much healthier. This is because rhubarb as a plant contains loads of vitamins and minerals that are important in some very key bodily functions.

These vitamins and minerals include lutein, vitamin C, and K, the B-complex, calcium, potassium, and so many more.

Below is a list of some of the health benefits that one can expect from eating rhubarb or incorporating it into their diet or meals;

How To Use Rhubarb

It is important to note that we only make use of the pink stalk of the rhubarb plant, the leaves are to be discarded.

This is because the triangular leaves of the rhubarb plant contain high levels of a chemical poison known as oxalic acid.

When consumed causes symptoms such as abdominal pain, seizures, shock, pain in the mouth, pain in the throat, tremors, throwing up, and burns and blisters where the acid may have made contact with skin, lips, tongue, or gums.

I am sure that none of us would want to experience any of the above and as such, it would probably be best to just avoid the leaves of the rhubarb plant.

Generally speaking, rhubarb can be prepared roasted, sauteed, stewed, or pureed with the most common way of preparing it being stewing it.

In this article, we will focus on the stewing method of preparation.

All you need for this method is ten stalks of properly cleaned and diced rhubarb, three cups serving of white sugar, a few cups of water, and a teaspoon of ground cinnamon to taste. The method is as follows;

How To Store Rhubarb

As is the case with almost every other natural ingredient, once it has been harvested from the main plant or the ground, rhubarb tends to wilt and soften quite quickly.

This is especially the case when it is left at room temperature. Because of this characteristic, you may want to store the rhubarb just as soon as you can in readiness for when you will be ready to use it.

It entails loosely wrapping the stalks in aluminum foil before putting them in the refrigerator. This method allows one to potentially extend the rhubarb’s fresh qualities for up to two weeks or even longer.

If you want to store the stalks for longer, you can go ahead and freeze them. The method is quite simple:

Gravy is a thick sauce made by thickening stocks with a roux made with flour and butter or oil. Usually, it is very satisfying with a fantastic flavor and texture. Gravy is relatively easy to make. However, it may end up tasting like flour for two reasons; you used too much flour, or your flour…

White meat is not my favorite type of meat. I eat it, but I like to avoid it when I can. Many of you love chicken; otherwise, fast-food joints would be out of business. It amazes me how many people eat Mcdonald’s chicken with fries. I have nothing against it, for I have also passed…