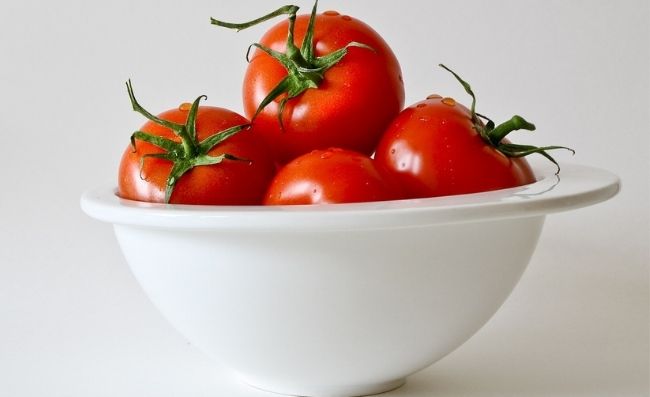 We’ve all come across recipes that direct you to use tomatoes measured in volume (cups) or weight (pounds). It can be a bit frustrating if you can’t weigh the tomatoes but you have no idea how many tomatoes are in a pound.

Luckily, this article will give you a selection of tomato conversions, so there is no need to weigh the tomatoes every time you need to use them.

Wondering how many tomatoes are in a pound? This article is for you. We will give you all the answers that you need.  We’ll also discuss other useful conversions, so keep reading.

How many are in a pound?

The smaller tomatoes will be more in a pound. For instance, if you have cherry tomatoes, you’ll have to use twenty of them. Approximately eight plum tomatoes make one pound.

How many cups of tomatoes are in a pound?

I can’t tell you the exact amount, but there are approximately 1 ½ cups of chopped tomatoes in a pound.

If the tomatoes are pureed you’ll need about three cups. These measurements are a pretty decent estimate, so don’t shy away from using them.

How many cups of tomatoes are in a can?

Personally, I stock them in my pantry since they come in very handy in the kitchen. One 16-oz can of tomatoes is approximately 2 cups of fresh tomatoes.

Next time your recipe calls for 2 cups of tomatoes just use the canned tomatoes you have in your pantry instead.

What is the weight of an average tomato?

How many cherry tomatoes in a pint?

How many tomatoes in a bushel?

How many tomatoes in an 8-oz can?

Where to buy tomatoes

I discovered that shopping local is the key to picking the best and most delicious tomatoes. So if you live close to a farmers’ market, it is the best place to buy tomatoes.

Supermarkets also stock tomatoes, but you should know that the suppliers pick the tomatoes while they are still green so that they do not bruise o transit.

This is a disadvantage since tomatoes do not continue to ripen once harvested. Therefore, despite them turning red and becoming softer, the flavor won’t be as good as it would have been if it was harvested when ripe.

Tomatoes bought from farmers’ markets may not have the perfect shape and skin that store-bought ones have, but the flavor is unbeatable. They have an amazing flavor.

Also, check out; How to Preserve Fresh Tomatoes without Freezing.

When buying tomatoes, go for the ones that are smooth, firm, and shiny. Be on the lookout for any bruises or soft patches. Tomatoes with bruises and patches are either overripe or have gone bad.

You should also smell the tomato. Fresh tomatoes usually have a pleasant fragrance. If there is no fragrance, chances are that the tomato won’t be flavorful.

If you do not get the best tomatoes, you can always opt to use canned tomatoes. They have an amazing flavor, and they complement most dishes including sauces and casseroles.

How to store tomatoes

If you buy tomatoes that are not fully ripened, you can store them in a plastic bowl and cover them with a lid that has holes drilled on it. This way, the tomatoes will ripen at a faster rate thanks to the ethylene gas trapped by the lid.

Store ripened tomatoes at room temperature. I usually store mine on the kitchen counter. Do not refrigerate tomatoes unless it is absolutely necessary.

For instance, if you have many extra-ripe tomatoes, you can store them in the fridge to slow down the ripening process.

How to get perfect looking baked tomatoes every time

I am a fan of baking and stuffing tomatoes.

In the past, I used to get very frustrated when they lost their shape during cooking until I discovered this simple trick.

If you want to get perfect-looking baked tomatoes, simply bake them in a lined muffin tray. They will be the best-baked tomatoes you have ever had.

There might be a slight difference, but on average there are eight small plum tomatoes or two large tomatoes in a pound. One pound of tomatoes translates to 1 ½ cups of chopped tomatoes.

In case you are making a dish that strictly requires you to use one pound of tomatoes, I suggest you weigh them.

This way, you’ll use the exact amount of tomatoes you need to use. If not, just use two large tomatoes or eight small plum tomatoes.

How To Use A Food Mill For Tomatoes. Click here to learn.

When you spend a lot of time trying to grow mung bean sprouts only to end up with a smelly mess, you may ask yourself; do mung beans smell? If your mung beans smell, something is wrong. There are several reasons why mung beans smell. The main reasons are; poor seeds quality, presoaking seeds for…

If you have never tried pomegranates, the chances are that the high price tag prevented you from the get-go. Pomegranates are somewhat pricey compared to other fruits. Pomegranates are expensive for several reasons. The two main reasons are; they have a lot of health benefits, i.e., they are a superfood, and most of them are…