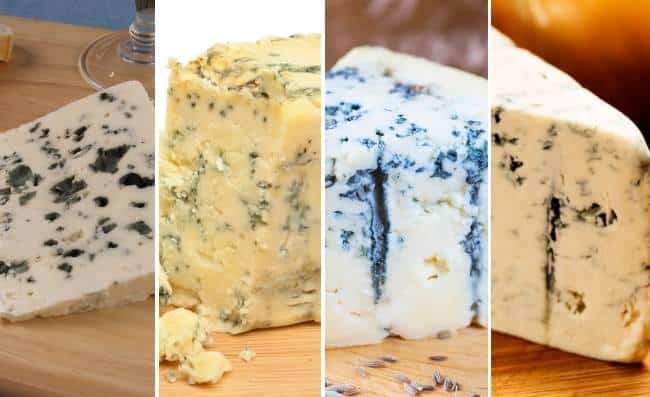 Cheese is one dairy product that is famous among Americans. I should know because I use it a lot. Even though mozzarella and gorgonzola are my favorites, I have tried Roquefort cheese occasionally.

It was easy getting Roquefort cheese in the grocery stores a while back. Nowadays, this cheese has become scarce.

The good news is that you can use a variety of other blue cheeses in Roquefort if you find yourself with a recipe that requires you to use it.

Other than not finding this cheese in the grocery stores and supermarkets, you might have different reasons you do not want to use Roquefort cheese. Personally, a milder blue cheese does the trick.

If you cannot find Roquefort cheese, or you want to replace it for another reason, I have the perfect substitutes that you can use.

What is Roquefort Cheese?

Roquefort cheese is blue cheese. Manufacturers term it blue cheese because it has all blue cheeses’ characteristic blue veins. It is cylindrical and has a thick and creamy texture.

Unlike most blue cheese types manufactured using cow’s milk, people get this cheese from sheep’s milk. We can argue that this is the reason Roquefort cheese has such a thick consistency.

This cheese is one of the most famous types of blue cheese. It is available worldwide and is cheap. It is, however, not legal in the united states for health issues.

Due to Roquefort cheese being illegal in the US, it is rare to come across it. Thus, you will need great substitutes to replace it.

Roquefort has a pungent smell and a tangy taste. It is also crumbly and is perfect when eaten raw. People it with pizza and fruits. They also snack on it or use it on a salad.

Even if this cheese is banned in America, it does not mean that other countries don’t have and use it. It is widely known, and people use it in all sorts of recipes.

We have already established that Roquefort cheese is banned in the united states.

For that reason, it is almost impossible to come across this cheese. What do you use if you come across a recipe that requires you to use Roquefort cheese?

Being a personal favorite, I had to start with this excellent blue cheese. Gorgonzola is a mildly tangy cheese. If you do not like the strong, pungent smell, like me, this will be your best alternative.

It is widely known and beloved in the united states, and you can buy it in almost any grocery store. Better still, it is approved!

This cheese’s slightly tangy and nutty flavor makes it perfect for most recipes that require cheese. I love preparing a cheeseburger with gorgonzola. It is the perfect combination of sweetness and tanginess.

It is also perfect to use as a pizza topping. Since its blue veins are pretty established, it gives a beautiful color to your salad.

Gorgonzola is semi-solid when not entirely aged. When it has wholly aged, it is crumbly. If you plan to use this cheese with a recipe that requires cooking, I advise you to use the semi-solid one.

Maytag cheese is another excellent substitute for Roquefort cheese. It has a semi-hard to hard texture depending on its age. It is soft when young and crumbly upon aging altogether.

This cheese is a perfect alternative because it is blue cheese and has a sharp pungent smell like Roquefort. It is also tangy, and you can use it in all the ways you can use Roquefort cheese.

I’m not too fond of the extreme tanginess of Maytag cheese. So, when using it, I compliment it with honey to curb the bitterness. But, we are different.

Maybe you want to substitute Roquefort cheese with something that is very tangy. If so, Maytag cheese is perfect for you.

You can buy Maytag cheese in almost any grocery store. It’s pretty famous, and you might already have it in your fridge if you love blue cheese.

So, if you come across a recipe that requires you to use Roquefort and you do not have it, grab Maytag cheese and use it instead. You might not even note the difference.

Stilton cheese has a very defined tangy flavor. It is also soft and crumbly, just like aged Roquefort. These characteristics are the ones that make it an excellent alternative for Roquefort cheese.

It is a white cheese with clear blue stripes. It looks like gorgonzola cheese from a glance. Unlike gorgonzola, this cheese has a somehow bitter taste.

The bitterness is another thing that it shares with Roquefort cheese, thus making a perfect replacement if you want to replace it with something with the same flavor.

In my opinion, stilton cheese is very colorful. It makes delicious and enticing salads. When making salads with it, you can add honey or any other sweetener if you do not like the tanginess.

This cheese is crumbly like Roquefort cheese, and you can use it as a pizza topping. You can also eat it raw.

The main difference between this cheese and Roquefort is the color. Roquefort has yellowish color with blue strikes while stilton is white with blue stripes. Other than the color, the two kinds of cheese taste the same and make perfect substitutes.

We have already established that this cheese has an intense and tangy flavor like Roquefort cheese. Moreso, this cheese is white with blue strikes. It makes your meal look enticing. It is also soft and melts quickly when cooking.

Due to this fact, this is a suitable replacement for Roquefort cheese, especially in recipes that require cooking. It melts and gives your dish a perfect consistency.

Danish blue is an excellent alternative to Roquefort cheese due to its similarities in texture and flavor. Also, bearing in mind that the government banned Roquefort cheese in the united states, danish blue becomes an even better replacement.

It is widely available, and it is cheap. You can buy it in the grocery stores and supermarkets. It also has a long shelf-life if you store it well.

Supposing you have eaten Roquefort cheese in the past and did not like its flavor, goat cheese is an excellent substitute. This cheese is not a type of blue cheese, unlike most substitutes on this list.

This cheese is a perfect substitute if you do not like the tanginess of blue cheese. It is creamy and soft, just like Roquefort, but not bitter.

We all have our reasons why we want to replace Roquefort cheese. The main reason is the scarcity of cheese in America. Another reason might be because of the bitter taste. If that is your reason, use goat cheese in its place.

People make goat cheese from goat’s milk. This cheese is different from many types of blue cheese, which are made from cow’s or sheep’s milk.

I am sure you must have heard of this cheese if you are a cheese fanatic. It is a popular type of blue cheese. It has a creamy and mildly tangy flavor.

This is another excellent alternative to Roquefort cheese for those who do not like extreme tanginess. It has a soft texture, and you can use it in any recipe that calls for Roquefort cheese.

This cheese is perfect for making a yummy risotto. It is also ideal for salads.

Supposing this is the only cheese you have, and you like the tanginess of Roquefort, you can use spices to increase the tanginess.

However, this cheese is very yummy, and I recommend you use it without the spices. The decision is yours.

Roquefort cheese is rare in the United States. The government banned it due to health issues. Because of this reason, you will find it hard to get Roquefort cheese.

In such circumstances, you will have to use an alternative. I have covered the six substitutes for Roquefort cheese that you can use.

I am sure we all know about sriracha sauce and just how amazing and versatile a hot sauce it can be in the kitchen. Native to Thailand, sriracha sauce was introduced to the United States of America in the early 1980s and has since become the hot sauce of choice in many households. In Thailand,…

When I think of my favorite dip, hummus is what comes to mind. Of course, I love guacamole and ranch, but they don’t give me as many options as hummus does. Grocery stores now have a variety of flavors when it comes to hummus. We now have more options than we did back in the…

Is there a perfect Horseradish Substitute? That’s a question I once asked. First, most people are familiar with the condiment that is made from horseradish root. The root itself is brown in color with a firm texture. Vendors sell horseradish in various forms, including dried, powdered, fresh roots, or ready-made condiments. I normally get horseradish…

This may be a good place to introduce yourself and your site or include some credits.