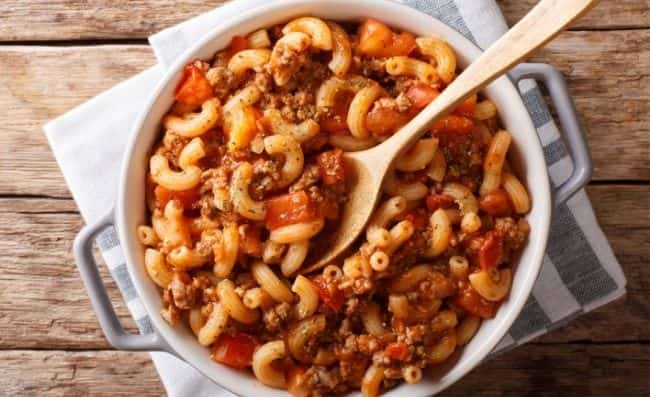 Milk is one of the key ingredients you will need to make an extraordinary helper, but if you run out of milk, you can always use a substitute in its place.

This article discusses the substitutes mentioned above in detail. Additionally, we look at how to store and reheat it.

We will also discuss its shelf life and alternatives for ground turkey in hamburger helper.

Also, Check Out: Substitutes for Milk in Mac and Cheese. Here.

Can you skip the milk altogether?

The role of milk in hamburger helper is to add a creamy texture and enhance the flavor further. If you don’t enjoy the taste of milk or don’t want to use it for health reasons, you can prepare your helper without it.

The only issue with skipping the milk is that your hamburger helper won’t have a creamy texture and creamy flavor that everyone loves.

If you choose to make a hamburger helper without milk, I use cream cheese to make it creamier and more flavorful.

Why Is My Cheese Sauce Gritty? Click to Read.

Cream cheese is an ideal alternative for lactose-sensitive people. Although it contains lactose, it is easier to digest.

Cream cheese has a thicker texture than milk. Therefore, you should reduce the amount you use in your recipe. If the dish requires 2 cups of milk, use one cup of cream cheese.

I love this substitute because it enhances the texture of the hamburger helper. It is readily available in supermarkets and grocery stores.

Evaporated milk is sweeter than milk, but it is still a suitable replacement. It will give your hamburger helper a creamy consistency.

Sour cream has a thick consistency and mildly tangy flavor. When you use it as an alternative to milk, it makes your hamburger helper dense and creamy. It also makes it slightly sour.

Sour cream has acidity, so be careful not to use too much in your recipe. Using too much sour cream may also make the helper unpleasantly thick.

If you watch your fat intake, non-fat dairy milk is the best alternative. Use it the same way you use milk in your recipe.

The downside is that the hamburger helper may not be as creamy as you are used to.

Therefore, it has a distinct coconut flavor. It also has a thick consistency, so it will make your hamburger helper creamy.

I recommend using unsweetened coconut milk for the best results.

If you want a non-dairy substitute, use almond milk. Its texture is thinner than milk, so your helper may become a little less creamy. If you prefer a creamy hamburger helper, add a little butter to thicken it.

I love this substitute because it makes the hamburger helper flavorful.

Greek yogurt works well as a milk substitute in hamburger helper. It has a thick consistency that will make your helper creamy.

If you run out of milk, try using Greek yogurt.

Red wine is a good milk substitute in hamburger helpers.

To use it, sauté your onions, carrots, and mushrooms until they are tender, remove them from the pan, add in your ground beef or chicken, and cook till it browns. Season the meat, then add the vegetables and a cup of red wine.

Simmer the mixture until the liquid reduces, then add butter. Your hamburger helper will be super delicious.

Butter can improve the texture of your hamburger helper and make it more flavorful. To use it, mix it with water, then add it to your recipe.

For every cup of milk that your recipe requires, mix 1 ½ teaspoon of butter with a cup of water and use it instead.

Chicken stock or broth is a great non-dairy alternative. It has a delicate, light texture and fantastic poultry flavor.

You can always use chicken broth in your hamburger helper if you run out of milk. It significantly enhances the flavor and improves the texture.

Margarine and butter have a similar flavor. You can use it to replace milk in a hamburger helper successfully.

To use it, mix it with water. If your recipe requires you to use one cup of milk, use 1 ½ teaspoon of margarine and one cup of water.

Mayonnaise is a great milk substitute. Its texture is thicker than milk, so a little goes a long way. If your recipe calls for three tablespoons of milk, use one tablespoon of mayonnaise.

Avoid using too much mayonnaise as it will make your hamburger helper too sour and unpleasantly thick.

Half and half is a good milk substitute. Its consistency is thicker than milk, so you may have to mix it with a bit of water to achieve a similar texture.

For every cup of milk, your recipe requires, mix ¾ cup of half and half with ¼ cup of water.

You can use whipping cream instead of milk while preparing a hamburger helper. Since its texture is thicker than milk, add some water to it and mix before adding it to your hamburger helper.

The flavor of whipping cream is slightly different from milk flavor, but it still makes for a good alternative.

Cream sauce mixed with pasta water is a great alternative. Substitute milk with this substitute in equal amounts.

If you don’t have any of the substitutes above, you can use water. Water has no flavor, so its only role would be to dilute the texture of hamburger helper. You should only use it if the helper is already flavorful enough as it is.

Combine the water with butter if your helper isn’t as thick as you want it to be. Butter will thicken its texture and make it more flavorful. Mix one tablespoon of butter with a cup of water for the best results.

Also, Check Out: Top 7 Cottage Cheese Alternatives You will Love.

How to store hamburger helper

The best place to store hamburger helpers is in the fridge. Transfer it to an airtight container, then store it in the refrigerator. If you want it to last for a long time, freeze it.

Do not store hamburger helpers at room temperature.

How to Freeze Hamburger Helper

You can freeze hamburger helper to extend its shelf life. Follow these steps if you want to freeze it properly.

Hamburger helper has a relatively short shelf life. If you store it in the fridge, it will retain its quality for up to five days. If you freeze it, it will last for three months.

How to Reheat Hamburger Helper

There are three ways to reheat hamburger helper, on the stovetop, in the oven, and in the microwave.

To reheat the hamburger helper on your stovetop, transfer it to a pan, add a little bit of water, cover it, and heat over a medium flame for approximately 12 minutes.

Remember to stir as you are reheating so that the helper heats up evenly.

To reheat the hamburger helper in your oven, preheat the oven to 350 degrees Fahrenheit, spread the helper in an oven-safe dish, and warm it in the oven for 30 minutes.

If you are in a hurry, you can reheat the helper in your microwave. Transfer it to a microwave-safe dish, cover it loosely, and reheat in the microwave for three minutes.

It would be best to remove the dish from the microwave every 30 seconds and stir to prevent overcooking.

Can you make a meatless Hamburger Helper?

It is possible to make a hamburger helper without meat. The process is straightforward.

You can also add your favorite veggies in place of the beef, but they may alter the consistency of your helper.

If you don’t have ground turkey, you can always use ground beef or ground chicken.

All the substitutes discussed above are ideal alternatives to milk in hamburger helpers.

The substitutes mimic the flavor and consistency of milk in hamburger helpers. The next time you run out of milk, use any substitute above.

Parsley is a common ingredient used in most, if not all households. Contrary to what most people think, parsley is not just a herb that you use to decorate food with. Parsley is a flowering plant that has several uses and health benefits. There are two main types of parsley i.e. the flat-leaf and the…

Gochujang is basically a Korean fermented chili paste. It is the perfect combination of hot, sweet, and savory flavors in one. In Korea, the locals use it as a condiment for octopus. In the United States, it is used in several dishes including salads, soups, meat, and vegetables. You can also add gochujang to rice…

Longan vs lychee? Are they the same? These are some of the tropical fruits that are hard to tell apart, especially if you do not interact with them often. I admit that I could hardly tell them apart at the beginning, but over time it got easier. Longan and lychee are closely related, and they…