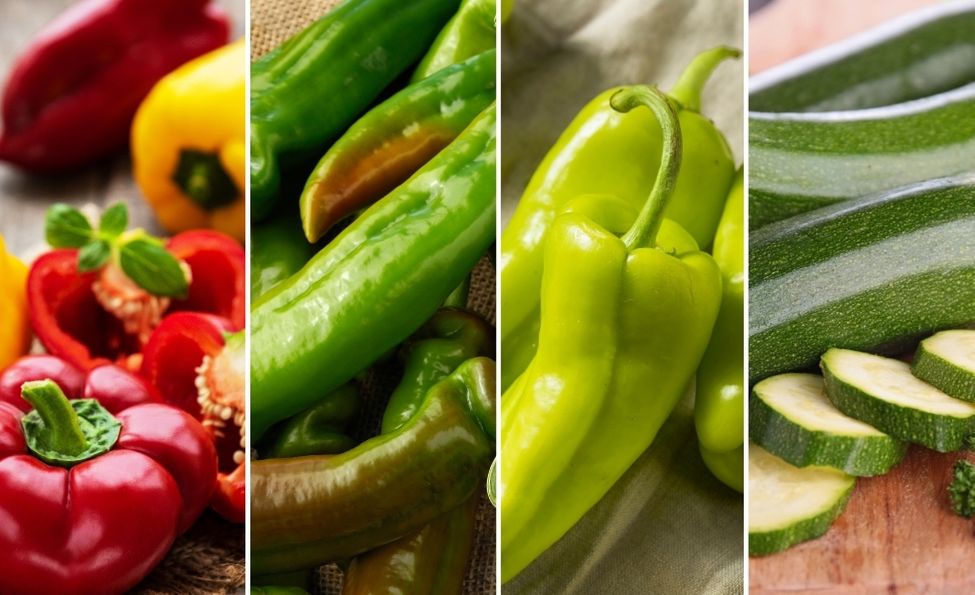 Bell pepper is a non-spicy variety of pepper that is quite common. I have come across so many recipes that call for green, red, or yellow bell pepper. Bell peppers are very versatile. I have used them in so many recipes including stews, stir-fry, casseroles, salads, and baked savory dishes.

From my personal experience, I have discovered that bell peppers which have glossy and smooth skin are the best, so I always choose the best when I go to buy them

There are several reasons why you may want to use a bell pepper substitute. Maybe you are suffering from indigestion problems, or you simply ran out and need an alternative.

Whatever the reason, there are several ingredients that you can use instead of bell pepper.

Poblano peppers, Anaheim peppers, Cubanelle peppers, Jalapeno, Pepperoncini, Zucchini, Pimiento, Onions, Bok Choy stems, and spices can be used as bell pepper substitutes.   You can also use broccoli when you have no other option

While choosing a bell pepper substitute, you first need to know the flavor you are going to.

You can either want a mild or subtle flavor, sweet and spicy flavor, or simply a spicy flavor. Different substitutes will give you different results, so keep your goal in mind when choosing it.

For starters, Poblano peppers have meaty, thick walls that hold their structure even when cooked. Poblano peppers also have a spacious internal cavity, similar to the one in bell peppers, which makes them suitable for stuffing.

My favorite thing about Poblano peppers is that they carry mild heat. Therefore, most people can handle it, including your little ones.

Poblano peppers are readily available since most supermarkets stock them. You’ll find them right next to bell peppers in the supermarket.

What is a suitable substitute for apple cider vinegar? click to read.

Anaheim peppers are my second choice whenever I’m looking for a bell pepper substitute. They add a fruity and slightly peppery flavor to the dishes they are added to.

Anaheim peppers also have thick walls. Therefore, you can use them for stuffing the same way you use bell peppers.

It is important to note that Anaheim peppers are spicier compared to bell peppers. However, the heat is tolerable. The heat of Anaheim peppers is similar to that of jalapeno.

All in all, Anaheim peppers will give you results similar to the ones bell pepper give you.

Another good bell pepper substitute is Cubanelle peppers. In case you do not like the grassy flavor of green bell pepper, these should be your go-to substitute.

Cubanelle peppers are sweet and crunchy. Their walls are thinner compared to those of bell pepper, but you can still use them for stuffing. I suggest using Cubanelle peppers as pizza toppings, in salads, and in casseroles.

Jalapenos are an excellent bell pepper substitute if you want to make your dish spicier.

If you do not like spicy food then I suggest using another substitute. I know several people who can’t handle the heat of the jalapeno. You can tone down this spiciness by removing the pith and ribs before adding it to your dish.

Green jalapenos are very similar to green bell pepper. They both have a grassy flavor. Therefore, you can easily substitute one for the other.

You can use pepperoncini as a bell pepper substitute. In terms of appearance, pepperoncini have a yellow-green color and bulbous shape.

Pepperoncini has a mild, sweet, and tangy flavor. Their walls are quite thin, so they are not ideal for stuffing. However, they work well in other recipes that call for bell pepper.

You can easily confuse pepperoncini with banana peppers, so be careful not to buy one when you intend to buy the other. Although they have a similar appearance, the two have different purposes.

Zucchini is another bell pepper substitute that I find very interesting. Zucchini can easily substitute any color of bell pepper, be it green, yellow, or red. The flavor of zucchini differs from that of bell pepper. I suggest using zucchini when you want your dish to have a subtle flavor.

Zucchinis have thick walls. Therefore, they are ideal for stuffing. You can use them to stuff chicken, veggies, or whatever meat you like.

Zucchini is also a great addition to savory baked dishes, stir-fries, and casseroles. They do not add extra flavor to the dish. Instead, the zucchini takes up the flavor of other ingredients.

What can you use as a Zucchini Substitute?

Pimiento peppers are smaller compared to bell pepper. They also have thin walls. Therefore, they are not ideal for stuffing. I suggest using pimiento peppers in stir-fry recipes, casseroles, and chili beans.

In cases where you intend to fry the bell peppers, onions can be a good replacement. When fried, onions become sweet and add a sweet flavor to your dish. They also tend to lose the typical onion flavor when cooked. Just like bell pepper, onions will give your dish a crunchy texture.

There are several varieties to choose from when you decide to use onions as bell pepper substitutes. Yellow onions work well in recipes that cook for a long time since they can withstand long cooking times. White onions should be used in recipes that call for raw bell pepper, especially salads.

Red onions can be used in soups, stews, or even salads to elevate the flavor of your dish.

Sweet onions and shallots are quite versatile since they cannot overpower your dish. Therefore, you can use them in any recipe that calls for bell pepper. Pearl onions are a great addition to sauces.

Bok Choy stems are not a common bell pepper substitute but they give good results. Personally, I have used them in so many recipes that call for bell pepper, and I have never been disappointed.

Bok Choy is Chinese white cabbage. It is a very common ingredient in Asian recipes. It is important to note that you should only use the white stalks when you want a bell pepper substitute. The dark green leaves usually have a bitter flavor.

Bok Choy stems are crunchy and have a mild sweet taste. You can easily chop the stems into small pieces before adding them to your dish.

Bok Choy stems can be used in recipes that require cooking. However, it is important that you do not overcook them. When overcooked, the stems lose their crunch feel and become mushy.

In case you do not have any of the substitutes we have discussed above, you can use spices to enhance the flavor of whatever you are cooking. There are a variety of spices you can use to give your dish that extra kick, and a flavor similar to bell pepper.

Some of the spices you can use include; ginger powder, garlic powder, cumin, oregano, and mustard powder.

The only downside with using spices is that they will not give you the crunchy texture that the other substitutes will give you. Otherwise, the flavor you get will be amazing.

In case you do not have any of the substitutes we have discussed above, you can try using broccoli. Broccoli holds its shape when cooked, so it will not become mushy or slimy.

Broccoli will also give your dish a crispy and crunchy texture. I suggest using broccoli in your stir-fry recipes for that extra crunch. You can also use broccoli in baked savory dishes. Broccoli will add a slightly bitter flavor to the dishes you add it to.

Can you substitute one color of bell pepper for another?

Additionally, red and yellow bell pepper does not have the grassy flavor that green bell pepper has.

Despite the differences, you can easily substitute one color of bell pepper for the other. Just keep in mind that the yellow and red bell pepper will add a sweet flavor to your dish.

Nestle Choco Bake must have been one of your go-to ingredients if you love and enjoy sweet cakes and chocolate-baked desserts. This pre-melted unsweetened ingredient is, however, no longer available.  Toll House ceased the production of Nestle Choco bake for a while now. So, you will have to use a substitute for any baking recipe…

Cooking Thanksgiving dinner can be intimidating, even for the most confident and seasoned of cooks. That is why it is important to know how to keep thanksgiving dinner warm for that perfect thanksgiving experience. I know, because despite many years of sweating it out in the kitchen and finally mastering the turkey, there is the…