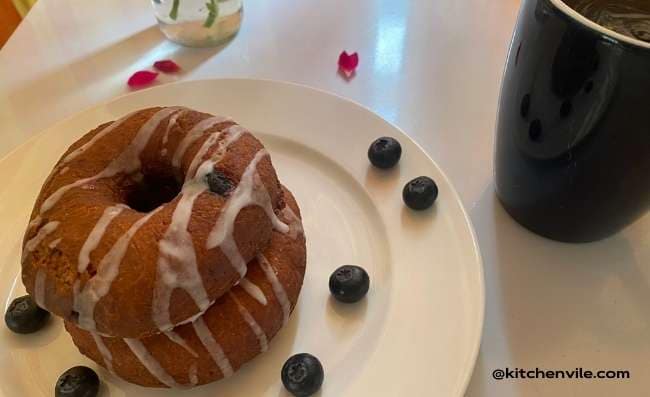 Great to give as a gift, eat as a dessert, or snack on after hiking on a challenging trail, and ALLLLLLL energy has been ultimately used up.

Dunkin donuts had been my favorite doughnuts until one day I ate a delicious donut from the Krispy kreme doughnut corporation. If you have a sweet tooth, you’ll definitely enjoy these donut recipes.

This cake doughnut recipe uses cake flour. This gives it a dense, soft and cake-like interior.

Butter introduces a rich fermented milky flavor in the recipe, providing moisture. The salt contained in the butter makes the other flavors pop out.

Vanilla is my all-time flavoring favorite in baking! Vanilla blends perfectly with the nutmeg and cinnamon exquisite flavors. The outcome will be more heavenly if you can access pure vanilla extract.

Blueberries combine beautiful natural contrast and natural sugars. They naturally contain the proper ratio of flesh to juice. This property makes most bakers love them. Use fresh berries, and soggy your doughnuts will not be.

Milk enhances the moisture and flavor in the Krispy Kreme Blueberry Cake Doughnuts. Buttermilk has a higher fat content giving you fluffier and perfectly moist cake doughnuts. To make buttermilk, add a few drops of lemon juice or white vinegar to your cup of plain milk, and let it sit for a minute.

The combination of the Nutmeg and cinnamon releases a lovely aroma into the baked blueberry donuts.

As an experienced home baker, I have learned that egg yolk acts as an emulsifier or, easily said it is a dough conditioner. (for those who condition their hair with eggs lol ). When egg yolk is used alone, the baked or fried product will be denser and contain the right amount of moisture. The crumbs will be more tender when you use the yellow part of the egg.

Any cooking oil, preferably vegetable oil, can be used. The blueberry cake Donuts are deep-fried in hot oil. I am not a fan of deep-fried foods, but deep inside of me, I knew the only way to achieve crispy-edged doughnuts was to deep fry. We fried our homemade donuts with soybean oil. Soybean oil possesses a sweet nutty enhancing the overall flavor of the cake doughnuts.

It would be best if you had the above to deep fry the doughnuts in hot oil.

This tool will be convenient when removing the blueberry delights from the hot oil. It allows extra oil to drip back into the pan.

A round mixing bowl is suitable for mixing wet and dry ingredients.

It is the best place to cool the Krispy Kreme doughnuts. Air flows from beneath, evenly cooling each doughnut.

This can be substituted with all-purpose flour or gluten-free flour for those following a gluten-free diet.

The above spices can be substituted with other spices, such as cardamom or star anise extract. Cinnamon sugar could be used in coating the blueberries too. This depends on your preference and appetite for kitchen adventures.

This ingredient can be substituted with salted butter but be sure to regulate the salt in the recipe. If butter is unavailable, you could use margarine instead.

This ingredient can be substituted by caster sugar or stevia (though pricier, it’s healthier!) You can dust the stevia powder onto the yummy blueberry donut, as they cool on the rack.

Instead of dairy milk, you can use coconut milk, almond milk, or cashew milk. These ingredients contain fat and are equally rich in flavor. Vegans feel at home with this kind of substitution in the recipe.

How to make this blueberry cake doughnuts recipe

I carved out two hours from my late afternoon schedule. I had happy, willing helpers, and my little girl constantly reminded us that she had been in a Krispy Kreme shop. She confidently explained to us the steps from start to end.

I was amused at her ability to grasp the steps in a young mind. In the steps of Vernon Rudolph, the founder of Krispy Kreme Cooperation, the little aspiring food scientist declared she would follow!

The steps were relatively simple and implementable by any home chef like me. If you have willing helpers in the kitchen, as I had, begin reading out the list of ingredients and have one of the helpers arrange the wet and dry ingredients on the counter.

In a separate small bowl, lightly beat the egg yolks, add milk and vanilla essence and mix well. Measure out the ingredients and set them aside in bowls. Whisk the dry ingredients in a large mixing bowl: the cake flour, granulated sugar, baking powder, and half of the cinnamon and nutmeg. Melt butter and mix with the egg and milk.

Pour the wet ingredients into the spiced flour mixture. Mix with a spatula then knead gently with clean hands until a smooth stick dough is formed.

In another bowl, instruct a little helper to lightly crush the blueberries and coat them with the remaining cinnamon and nutmeg. Keep an eye before the blueberries become so pulpy; we need some whole blueberries in our dough mixture.

Add the blueberries to the dough and fold them using a spatula. Ensure the fruity goodness is distributed evenly in the dough.

Grease your hands with nonstick cooking spray to handle the tacky dough, and move the dough on a floured surface. With a floured rolling pin, roll out the dough gently to 1.5inch thickness.

With a doughnut cutter, cut out the cake doughnuts keeping the centers aside.

Let the doughnuts rest on the surface for about 10 minutes. Heat the oil over medium heat; use a candy thermometer to check the oil temp, or use Grandma’s method by dipping a small piece of dough in the oil. The oil is hot enough when the little dough floats on the oil.

With a long, flat, floured spatula, carefully pick the doughnuts and dip them in the hot oil. I was careful to remind all my young helpers to avoid the hot oil. While this was happening, my teenage daughter was

preparing the powdered sugar glaze! We were having a splendid time as our little reporter supervised all the activities in the kitchen.

After cooking for two minutes, we flipped the doughnuts to cook on the other. Golden brown is the color to watch out for. Carefully I removed the golden brown doughnuts and set them on the wire rack to cool.

We piped some glaze on some doughnuts too. The serving of food and eating was done relatively fast that evening. Dessert time was unforgettable as the children feasted on the homemade Krispy Kreme Blueberry Cake Doughnuts.

The smooth texture and delightful blueberry flavor satisfied our little one, who had visited a Krispy Kreme shop earlier that day. ‘Mummy, I am so happy we can make homemade Krispy Kreme Blueberry doughnuts!” The children chorused together as they got ready for bed that night.

In my children’s quest to make the most well-known and popular recipes at home, we aimed to visit the Dunkin Coffee store or order online (Dunkins done easy) to sample their donuts too during the next school break.

Transfer them to parchment paper lined with a paper towel to absorb any extra grease.

At this point, let creativity kick in; you can use a teaspoon to drizzle the glaze onto the doughnut, forming beautiful zebra stripes!.

Serve the special treat and enjoy the delightful cake doughnuts with a cup of coffee.

Why are my glazed Krispy Kreme Blueberry Cake doughnuts sweating?

The glaze contains a lot of moisture which evaporates when the doughnuts are left at room temperature, especially in direct sunlight. To avoid this, wrap them with parchment paper and then a cling film or, rather, keep the doughnuts in an airtight container that seals perfectly, keeping all the air out.

Yes, these absolutely delicious fried goods can be frozen. If you want to postpone your enjoyment to a future date, you can easily freeze the cake doughnuts. Wrap them with baking parchment, place them in a resealable bag, then freeze them. Heat them in a microwave when you want to consume them.

Krispy Kreme Blueberry Cake Doughnuts contain fresh blueberries, which are perishable. The longer they stay, the juices begin to wet the Kreme Krispy Cake Doughnuts creating a conducive environment for the growth of molds.

It is always safe to store the blueberry cake doughnuts in the refrigerator in a plastic wrap. The doughnuts will stay fresh for four to five days when you keep them in an airtight container.

Can I bake my Krispy Kreme Blueberry Cake Doughnuts?

Oh yes it is possible for those avoiding the extra fat in deep-fried doughnuts. Most calorie-counting individuals strike out deep-fried foods from their daily diet. Use a mini muffin tin for baking the cake doughnut batter for about fifteen minutes in a preheated oven at 150 degrees f (Fahrenheit).

Not eye-catching at all. Use fresh blueberries for impressive results.

Nothing makes me happier than tangy caramelized apples wrapped in a fluffy pastry and topped with cheese icing. If you are a great fan of apple pies or cinnamon rolls, you will absolutely fall in love with these amazing apple pie cinnamon rolls. It’s having twice the amazing taste all in one. I can’t explain…

A recipe with a short list of four ingredients requires only 15 minutes of preparation!  About the recipe  The weekend was here, and I was determined to treat my children and their friends after working diligently in school. I had no time to get more supplies from the store and had to get what I…

This white chocolate raspberry loaf cake recipe is a delicious cake recipe that can be made with a few simple steps. The sweet white chocolate and juicy raspberries make this one of the best simple bake cakes you’ll ever have. The color palette just catches your eye every time you look at them. The Raspberry…

This Christmas puppy chow recipe is the perfect snack for this holiday season. The classic recipe is a unique, mouth-watering no bake dessert to add to your snack menu for upcoming holiday parties. Add this holiday treat to your snack table on any occasion and see how its funny name sparks numerous conversions on lively…

Pasta salad is most definitely a summer classic that everyone loves. The amazing thing about it is that it is very flexible and you can add to it any of your favorite mix-ins. Making pasta salad is truly as easy as boiling water, cooking the pasta until it is tender and then tossing in a…